I've long known that my Erdös Number is 3. This means that the length of the path on the graph of academic coauthorship between me and mathematician Paul Erdös is 3. Somewhat to my surprise, I recently discovered that I can also trace a chain of coauthorship to Donald J. Trump. My Trump number is 5. 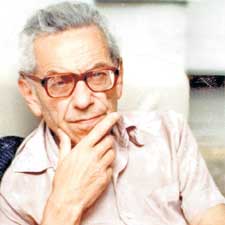 There are two length three paths of coauthorship between me and Erdös. Both go through my thesis advisor, George Forsythe. I wrote a blog post about Forsythe a few years ago. Forsythe has an Erdös number of 2 in two different ways because he wrote papers with his thesis advisor, William Feller, and with Ernst Straus, both of whom had worked directly with Erdös.

Steve Johnson is a buddy of mine who also has Erdös number of 3. His path goes through Jeff Ullman and Ron Graham to Paul Erdös. But that's not why I bring him up today. In the 1970's Steve was part of the group at Bell Labs that developed Unix. He wrote the Unix tool Yacc (Yet Another Compiler Compiler), as well as the original C compiler, PCC, (Portable C Compiler). He is coauthor, along with three other Unix guys, of a paper about C in the 1978 issue of the Bell System Technical Journal that was devoted entirely to Unix.

Steve and I wrote a paper about compiling MATLAB, although the references to that paper on the Internet have my named spelled incorrectly. It is through this paper that I was surprised to find that my collaborative distance from Donald J. Trump is only 5.

Finite Trump numbers are possible because Trump's famous book, "The Art of the Deal", was actually ghost-written by a free-lance writer named Tony Schwartz. And Schwartz has coauthored many articles and books with other people. Some of these articles might not exactly be classified as academic papers, but what the heck.

The coauthorship path between me and Trump is through articles by John Winslow Morgan, a professor in the Harvard Business School who specializes in the history of technology. He has written articles with Schwarz and with Dennis Ritchie, one of the originators of Unix.