On March 8, 2016 a total solar eclipse occurred in the South Pacific on a path that crossed Indonesia, Borneo, and other locations. The New York Times said that streetlights in Indonesia turned on as the eclipse darkened the sky. Reuters reported on the boost to the local economy due to eclipse tourism, as thousands of tourists poured into the area. There were events such as music festivals and markets set up specifically for the eclipse.

In the video animation below, you can see the shadow of the moon as it crosses the South Pacific, as seen from space by the Himawari-8 satellite.

Video credit: Cooperative Institute for Meteorological Satellite Studies: http://cimss.ssec.wisc.edu/
Note: The images that went into this animation were created by the Japan Meteorological Agency’s Yasuhiko Sumida,
visiting scientist at the Space Science and Engineering Center at the University of Wisconsin.)

The Science of the Eclipse

The eclipse was imaged by teams of researchers sponsored by the National Solar Observatory (NSO) headquartered in Tucson, AZ. MATLAB and the Image Acquisition Toolbox were used by the teams to collect images. This data will allow solar astronomers to study the dynamics of the sun’s corona, its outer atmosphere. The image below was taken during the eclipse, captured by the Image Acquisition Toolbox. 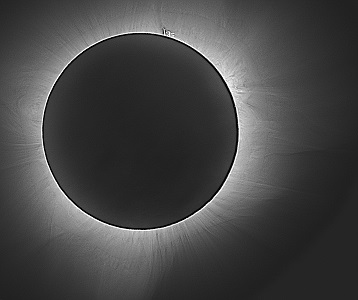 Image of 2016 eclipse captured by the Data Acquisition Toolbox.

The 2016 eclipse was a test run for a much larger data-gathering event that will take place next year. A total solar eclipse will occur on August 21, 2017 where the path of totality will pass over the continental United States. This is a rare event. The last total eclipse visible from the US occurred in February, 1979. The path of totality for the 2017 eclipse is shown on the map below.

Dr. Matthew Penn of the NSO is the principal investigator of a project to collect data from 61 sites as the 2017 eclipse passes over the United States. His project, Citizen Continental America Telescope Eclipse Experiment (Citizen CATE Experiment), will use a small fleet of telescopes spread across the US to record the eclipse from coast to coast. He is recruiting amateur astronomers, school groups, and citizen scientists to man the telescopes and record the data at each of the 61 sites. The project will permit the NSO to gather an unprecedented amount of data on coronal dynamics.

MathWorks is a sponsor of the project, providing both software and funding. Our team is also providing technical expertise to the project and has signed up to be volunteers at one of the data collection sites in 2017. If you are interested in volunteering with the Citizen CATE Experiment, click here for more details.