Will's pick this week is Wing Designer by John Rogers.

Have you ever wanted to design your own aircraft? Think you could build something that would actually fly? John's Wing Designer gives you a chance to do just that without ever leaving your desktop.

Wing Designer provides a user interface that enables you to adjust 20 different parameters for a wing and the aircraft you plan on attaching it to. You choose the wing dimensions: wingspan (width), root chord length (center length), and tip chord length (edge length). You choose the airfoil, which determines the shape of the wing's cross-sectional area. Want your wings to slope back or bend like a V in the vertical? You can adjust the sweep and dihedral angles, too. Once you enter all the parameters, you push Calculate and get a prediction of your aircraft's range and payload capacity. Performance is summarized by an overall score...the higher the better. 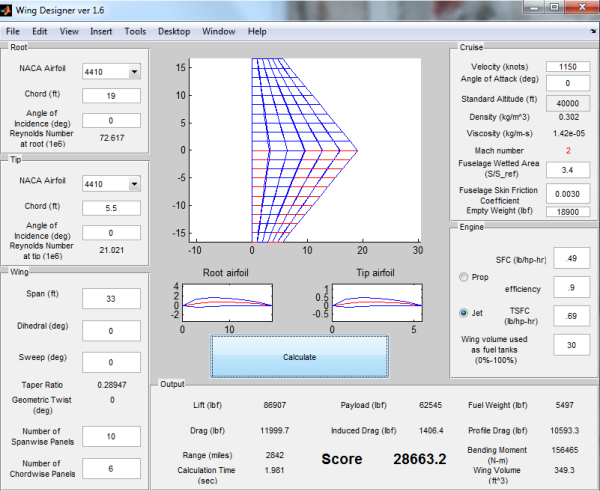 When I was an undergraduate, I would have loved to have gotten my hands on this tool. It's a great way to quickly get a sense for how design choices impact system behavior. For giggles, I tried to reproduce the F-16 wing. A clean screenshot of my results are shown above. Below, I annotated the user interface to give you a sense of how the wing would be placed on the fuselage.

The tool doesn't have the exact airfoil used by the plane, but I was able to get good results with a 4412. I found that if I used a different airfoil at the tip, I could increase the aircraft's range and bump my score up a little. If anyone can find a pair of airfoils that top a score of 29252, please let me know! 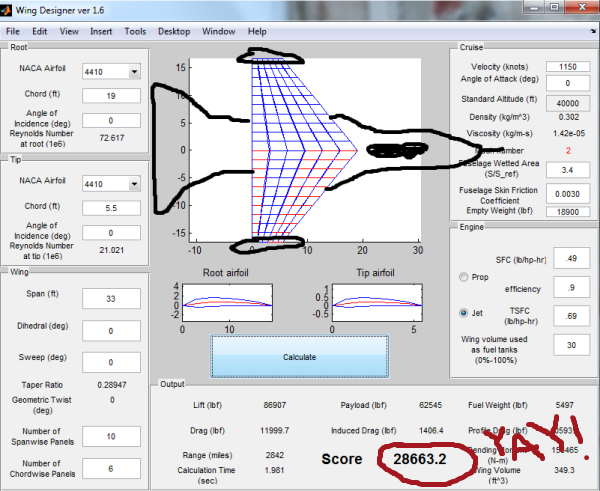 Comments
Let us know what you think here or leave a comment for John.