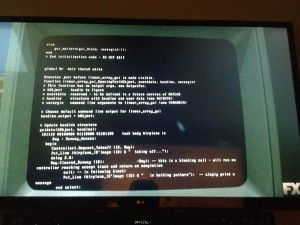 The TV show "The Americans" is a show about Soviet Union secret agents pretending to be a normal American couple in 1981-82 or so. In the 2nd season's final episode, which I watched last night, a military officer shows an FBI agent a computer screen that's supposed to be showing some code from a top-secret computer program called Echo. (Don't worry; this is not a significant spoiler.) When the code flashed by I thought it looked odd, more modern than I would have expected for an early 80s program. So I paused the show and took a closer look. I was very amused to see that the top half of the screen contains MATLAB code of a type that did not exist until about 20 years after the show's time period.

The MATLAB code was clearly generated using GUIDE, the MATLAB GUI Design Environment. (Click on the thumbnail above for an enlarged view in which the code is readable.)

When I showed this to my MathWorker friend Jason, he did a little investigating and discovered the code's origin. It's from an 11-year-old File Exchange contribution called MATLAB Simulations for Radar Systems Design by Bassem Mahafza.

So congratulations, Bassem! Your old MATLAB code is now famous (sort of).