If you’ve been following Cody for any time at all, you know that we have some superstar competitors who have stayed in the top ranks since the very beginning. Some time ago I started tracking the top 10 players using Trendy. Here’s what that chart looks like. 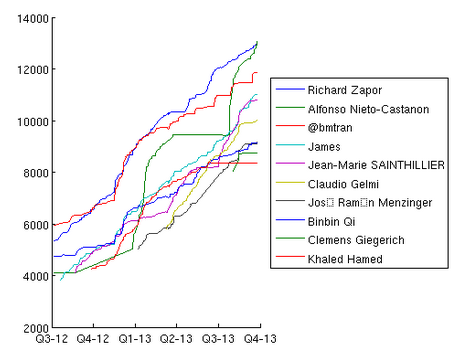 For the longest time, and dating back to the day Cody launched, Bryant Tran (@bmtran) was the undisputed king of the hill. We even featured him in an interview on this blog. Eventually Richard Zapor was to surpass him. Richard is a tireless competitor and has made something of a specialty of creating high-quality challenges for the community (173 and counting!).

If you look at the blue line that represents Richard, you can see that he has steadily moved upward. But now look at Alfonso Nieto-Castanon. His green line progresses in enormous leaps punctuated by periods of relative inactivity. Alfonso finally passed Bryant Tran earlier this year, and today I was surprised to see that he was also converging rapidly with Richard at the number one spot.

When I saw this graph, I dashed straight over to the Cody leaderboard and what should I see but an exact tie for first place between Richard and Alfonso! 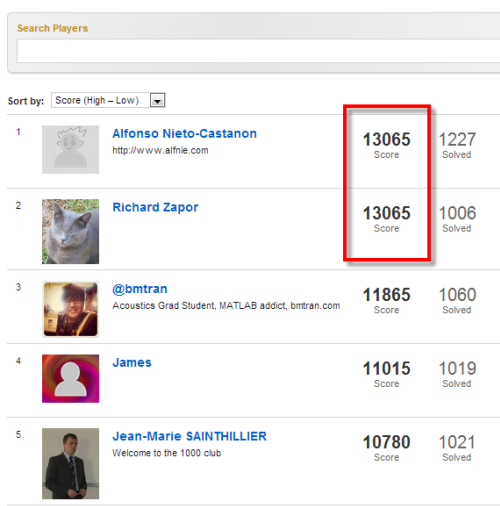 I was so impressed I took this snapshot. It’s probably changed by now and who knows who will be in the lead at the end of the day? But still, this snapshot depicts a great moment in Cody and sporting history.

Well done, gentlemen! It’s an honor to compete in the same game, though not in the same league.