According to Sports Illustrated, this weekend’s Super Bowl set 24 NFL records. An additional 7 records were tied. Records were set on the viewership side as well. With 113.7 million viewers it was the most-watched telecast in Fox history and the second-most watched Super Bowl of all time.

There are three main reasons that 113.7 million people tuned into watch the Super Bowl this past weekend:

Drones played a major role in each of these 3 areas. This was even after the Super Bowl was declared a “No Drone Zone”.

1. Drones in the game

The FAA issued a “No Drone Zone” order for the big game. No drones were permitted within a 34.5-mile radius of the stadium. According to Fox News, “The FAA has been issuing similar drone bans for the Super Bowl for several years in response to the growing popularity of the remotely controlled flying machines.”

There was no mention of what methods of containment would be used if a drone was spotted, but there are multiple products to monitor and apprehend (read: disable) unwanted drones. Additionally, some drones such as those from DJI, come equipped with geofencing software to keep drones out of restricted areas.

While there were no news reports of drones flying during the game, a drone was spotted hovering over the Falcon’s pre-game practice at Rice University. I guess the practice field, located next to residential housing, wasn’t a location protected by geofencing. Sorry, no Dronegate conspiracy here: According to CBS Sports, “The security people clearly said it was a resident who lives in the neighborhood.”

2. Drones in the halftime show

While drones were banned at the Super Bowl itself, they made an undeniable impression during the halftime show. Lady Gaga’s performance featured a synchronized display of 300 drones, each fitted with LED lights capable of creating 4 billion color combinations. These Intel Shooting Star drones were recorded before the show. (Yes, I stand by my claim that there were no reports of drones during the game!) 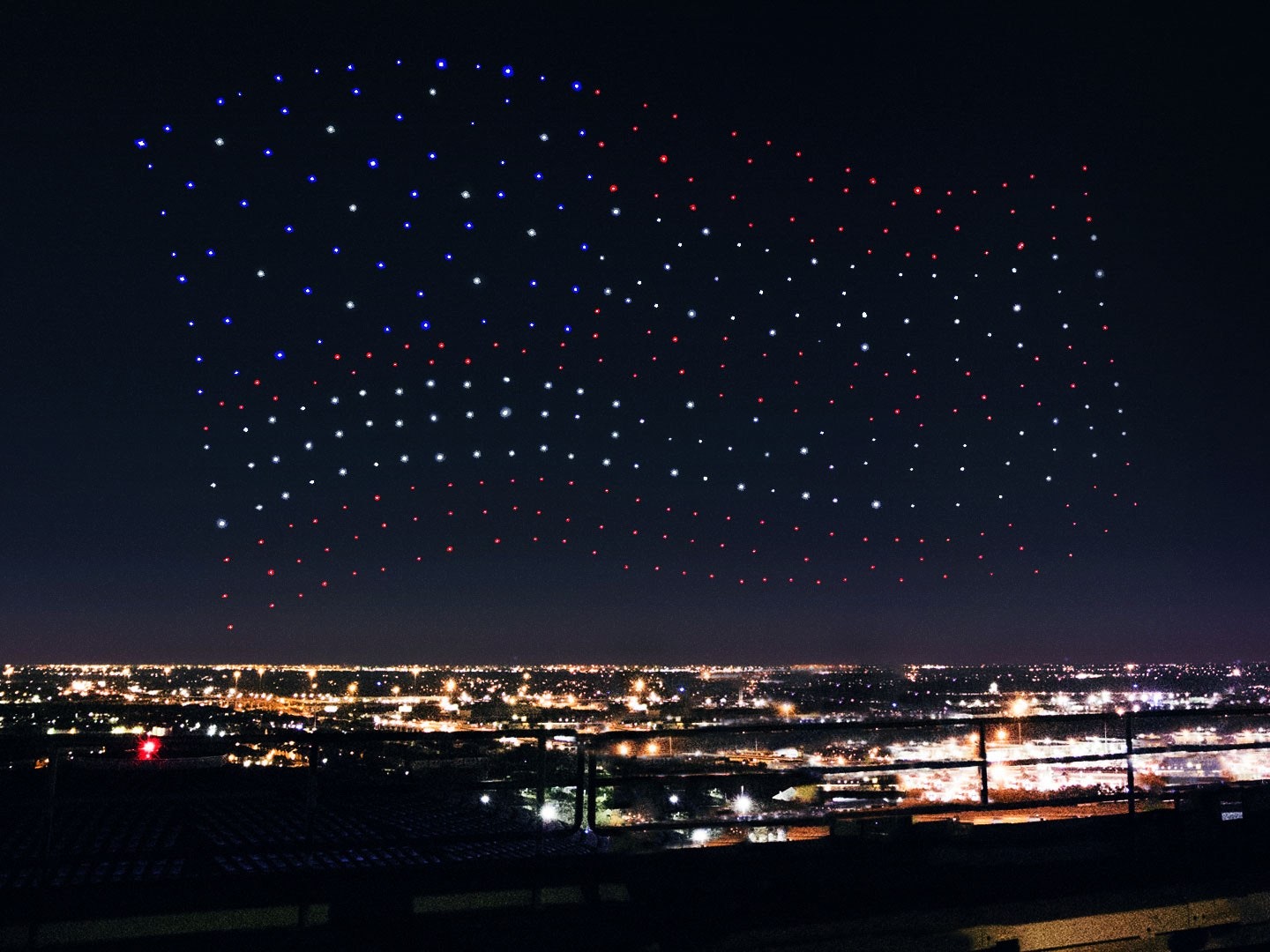 According to NBC News, “Of course, the biggest sporting event of the year comes with plenty of security precautions. The secret behind the overhead display: The drone show was filmed last week. Intel received a waiver from the Federal Aviation Administration, which regulates drones, allowing them to fly up to 700 feet and in more restrictive airspace.”

It’s the first time the colorful drones were used at an event of this scale. Yes, yet another record for Super Bowl LI.

“Lady Gaga and the Super Bowl creative team wanted to pull off something that had never been done before and we were able to combine Intel drone innovation with her artistry to pull off a truly unique experience,” stated Josh Walden, senior vice president and general manager of Intel’s New Technology Group.

According to the Intel fact sheet, “Intel’s proprietary algorithms automate the animation creation process by using a reference image, quickly calculating the number of drones needed, determining where drones should be placed, and formulating the fastest path to create the image in the sky.”

The drones follow a pre-programmed route in a highly choreographed show. The software also keeps the drones from colliding with one another, since they don’t have hardware sensors to detect collisions, nor do they communicate directly with each other. While the Intel drones don’t communicate with each other while flying, there are drone formations that do rely on drone-to-drone communication. Check out this blog post “What do drones and one of Alfred Hitchcock’s best-ever movies have in common?” to learn about swarming drones from the University of Pennsylvania’s GRASP Laboratory that interact with each other and can work in concert.

3. Drones in the ads

Super Bowl ads have become an entertainment form of their own. Companies pay big bucks in an attempt to reach the huge audience. According to Business Insider, Super Bowl LI ads cost upwards of $5 million for a 30-second slot.

This year, Amazon drone delivery was on display in an ad for the Amazon’s Echo device. While the ad was for Amazon’s Alexa, the delivery drone was the talk on many tech news sites, from engadget to TechCrunch.

This shouldn’t be a big surprise: Amazon has been hinting at drone delivery for quite some time. In December, Amazon made its first drone delivery and received a patent for a flying warehouse that will deploy the drones.

In order for this to work, these drones must be capable of autonomous flying. Think about it: Drones flying autonomously have to navigate and avoid obstacles. And unlike autonomous cars, they don’t have a pilot in the front seat ready to step in if something goes wrong.

But what if they get it wrong? What if the drones collide with something, or worse yet, someone. Forbes recently shared a video that showed researchers from Virginia Tech purposely flying drones into sensor-laden crash dummies to test the potential impact of a drone-human collision.

Drones are here to stay

If Super Bowl LI is any indication, drones are close to becoming ever present in our lives. There are 47,329 individual commercial drones registered with the FAA, and the industry is taking off, according to FAA spokesman Les Dorr. “It’s almost like somebody comes up with a new use for the technology almost every week,” said Dorr. As the technology matures and legislation evolves, we can expect to see far more drones in various applications, and researchers are leading the way.