Tesla invited Car and Driver reporters to the Tesla factory, where the reporter learned that there’s a lot that goes into maximizing the EV’s efficiency. Car and Driver recently shared what they learned in a report, “Tesla Tells Us How It Keeps Beating Nearly Everyone in the Range Game.” The article detailed the engineering responsible for the increasing range of the Model S without changing the battery pack.

“The current Tesla Model S Long Range Plus has an EPA range of 402 miles,” says Roberto Baldwin, senior editor, Car and Driver. “That’s an 87-mile increase from when the 100.0-kWh version of the vehicle was introduced in 2016.” 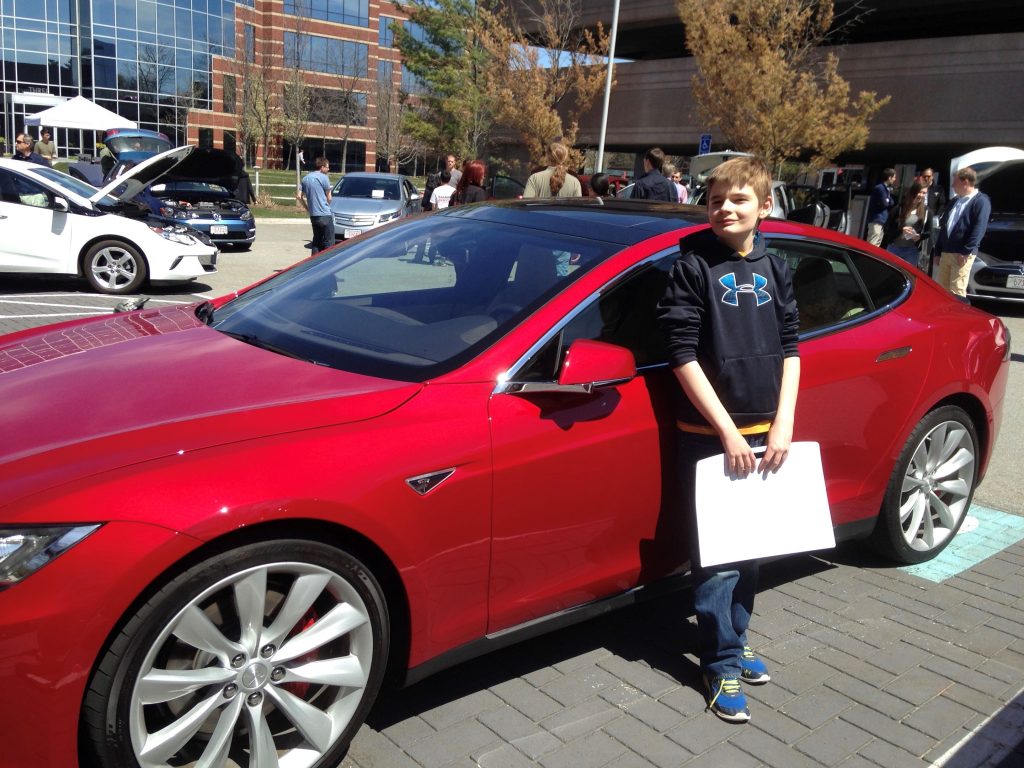 Tesla “show and tell” at MathWorks Campus in 2016.

Of course, the battery’s power density is critical, and Tesla has focused much attention here. But to get the most out of the available power, the efficiency of the vehicle is of great importance:

“But again, it’s not all about the battery; the efficiencies that lead to a vehicle with a 402-mile range from a 100.0-kWh pack need to be spread out over the entire vehicle,” says Baldwin.

A large part of Tesla’s success is the decision to custom-build everything from the motor and battery pack, to other components. “This do-it-yourself approach allows Tesla to continually tweak those parts to maximize their efficiency,” continues Baldwin.

Improving efficiency in the power train has lead to gains in range. Tesla’s motor in the Model S now has 90% efficiency, up from 80% when the car was first available. Tesla states that an 8 to 10 percent improvement in motor efficiency translates to a 15 to 18 percent increase in range. 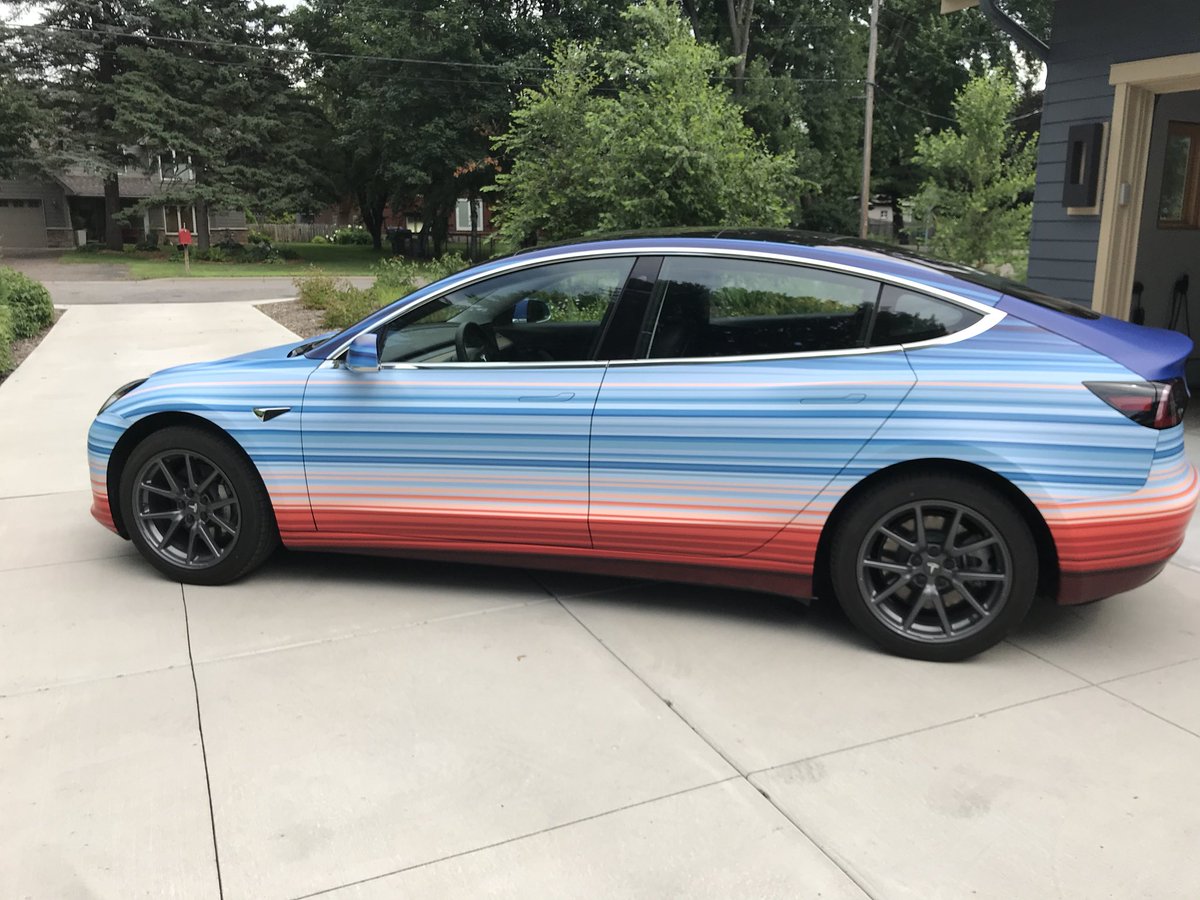 A Tesla Model 3 in a wrap using the warming stripes graphics, a climate visualization which shows the increase in average annual temperature since 1850. Image credit: Mark Hanson. To learn more about the University of Reading’s climate visualizations, check out my blog post from 2018.

MATLAB models where the energy is flowing

A key to increasing efficiency across the power train is understanding where the power goes. Tesla shared they have developed MATLAB models for this. 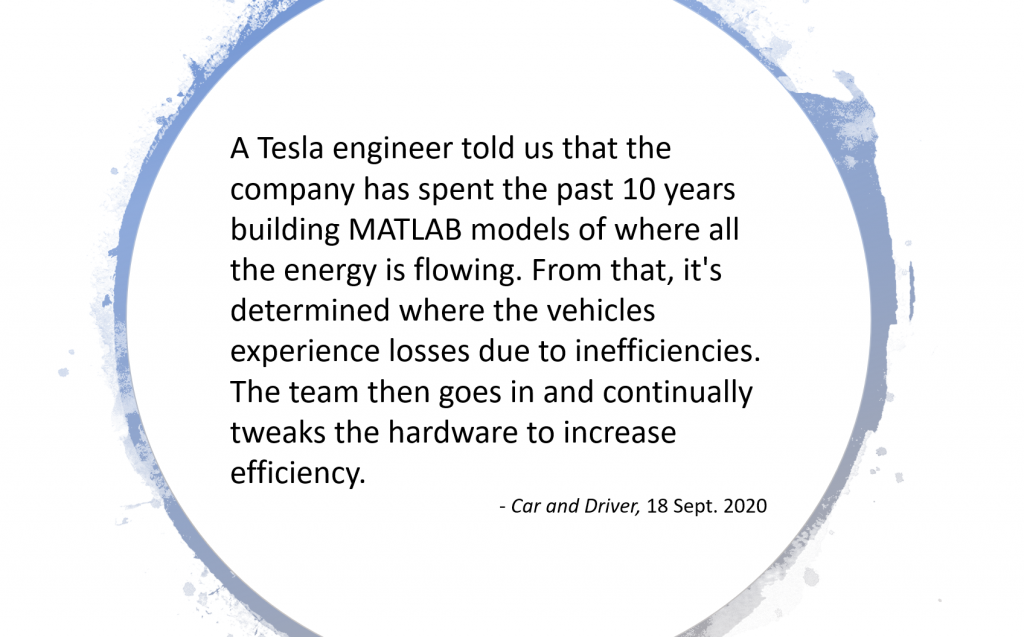 Tesla built MATLAB models of where all the energy is flowing

“A Tesla engineer told us that the company has spent the past 10 years building MATLAB models of where all the energy is flowing,” says Baldwin. “From that, it’s determined where the vehicles experience losses due to inefficiencies. The team then goes in and continually tweaks the hardware to increase efficiency. Additional secondary improvements can be pushed via over-the-air updates.”

Updates improve efficiency for vehicles already on the road, too

The team continually tweaks the hardware to increase efficiency. Tesla employs over-the-air updates to update vehicles’ software and push the improvements to cars already on the road.

“All of this tweaking and tinkering, trying to squeeze every last bit of energy out components, requires many of the elements used in the vehicle to be built in-house,” says Baldwin. “In other words, Tesla’s efficiencies require being Tesla built. That also extends to keeping those cars on the road.”

MATLAB models of where all the energy is flowing