Double Asteroid Redirection Test (DART), is a NASA space mission designed to test the planetary defense against near-Earth objects (NEOs). Last week, it crashed into Dimorphos, a small asteroid over 11 million km (7 million miles) away from Earth. This mission was designed to see if intentionally crashing a spacecraft into an asteroid is an effective way to alter the asteroid’s course.

Dimorphos was nowhere near Earth and posed no threat. In fact, there are no known Earth-threatening NEOs, but this technology could be deployed if one was discovered in the future. 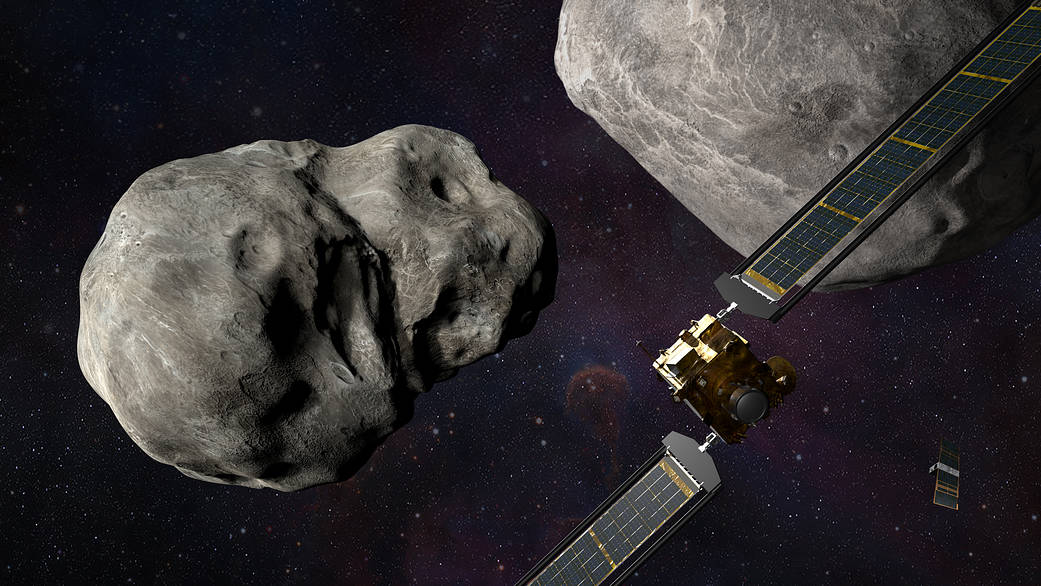 This illustration is of the DART spacecraft and the Italian Space Agency’s (ASI) LICIACube prior to impact at the Didymos binary system. Image Credit: NASA/Johns Hopkins, APL/Steve Gribben.

The spacecraft launched in November 2021.  On the scheduled day, September 26, 2022, it collided with Dimorphos as planned. DART was traveling at an astounding 14,000 miles per hour and hit the target. That target was not visible to DART’s onboard sensors until the last hours of its 10-month plus one-day journey.

The James Webb Space Telescope took one observation of the impact location before the collision, then several observations over the next few hours. Images captured by Webb’s near-infrared camera show plumes of material appearing as wisps streaming away from the center of the impact.

NASA estimates that every 2,000 years or so, a meteoroid the size of a football field hits Earth and causes significant damage to the area near the impact. But every few million years, an object large enough to threaten Earth’s civilization comes along. Impact craters on the moon, Earth, and other planetary bodies are evidence of these occurrences.

One such occurrence was the Cretaceous–Paleogene extinction event. According to National Geographic, 76 percent of all species on the planet, including all non-avian dinosaurs, went extinct when an asteroid hit the planet 66 million years ago. That asteroid slammed into the waters off the coast of Mexico at 45,000 mph.

Dimorphos is much smaller than the catastrophic asteroid that impacted Earth so long ago. The asteroid that wiped out the dinosaurs was 7.5 miles across, or almost 75 times as large as 530-foot long Dimorphos. Hitting such a small target millions of miles from Earth required a new type of navigation system: One that removed the possibility of human error during the last critical hours of the mission.

Throwing a DART at a moving target

DART relied on SMART Nav to direct the spaceship without any human intervention. This was crucial in the mission’s last hours, when, according to NASA, “a tiny maneuvering error could be the difference between hitting Dimorphos and racing past it at more than 13,000 miles per hour.”

“With SMART Nav, it’s no longer about just keeping the spacecraft in a prescribed orientation or carrying out correction maneuvers. It’s about conducting the entirety of the last four hours of the mission without any human intervention”, said Mark Jensenius, a guidance and navigation control engineer on the SMART Nav team at the Johns Hopkins Applied Physics Laboratory in Laurel, Maryland. “It’s about locating objects in space, selecting the correct asteroid, estimating trajectory corrections and commanding maneuvers on-the-fly to achieve the higher-level directive of ‘hit Dimorphos.’”

Knocking Dimorphos off its track

According to NASA, “The DART Investigation Team will compare the results of DART’s kinetic impact with Dimorphos to highly detailed computer simulations of kinetic impacts on asteroids. Doing so will evaluate the effectiveness of this mitigation approach and assess how best to apply it to future planetary defense scenarios, as well as how accurate the computer simulations are and how well they reflect the behavior of a real asteroid.”

According to the New York Times, “More detailed study will come years later when Hera, a spacecraft being built by the European Space Agency, arrives to take a close look at the two asteroids, especially the scar made by DART. Scientists estimate that there should be a crater 30 feet to 60 feet wide.”