Hello Everyone! Allow me to quickly introduce myself. My name is Johanna, and Steve has allowed me to take over the blog from time to time to talk about deep learning. Today I’d like to kick off a series called:

Cool projects created at MathWorks”   This aims to give you insight into what we’re working on at MathWorks: I’ll show some demos, and give you access to the code and maybe even post a video or two. Today’s demo is called "Pictionary" and it’s the first article in a series of posts, including:     Demo: Pictionary Pictionary refers to a game in which one person/team draws an object and the other person/team tries to guess what the object is. The developer of the Pictionary demo is actually … me! This demo came about when a MathWorks developer posted on an internal message board: 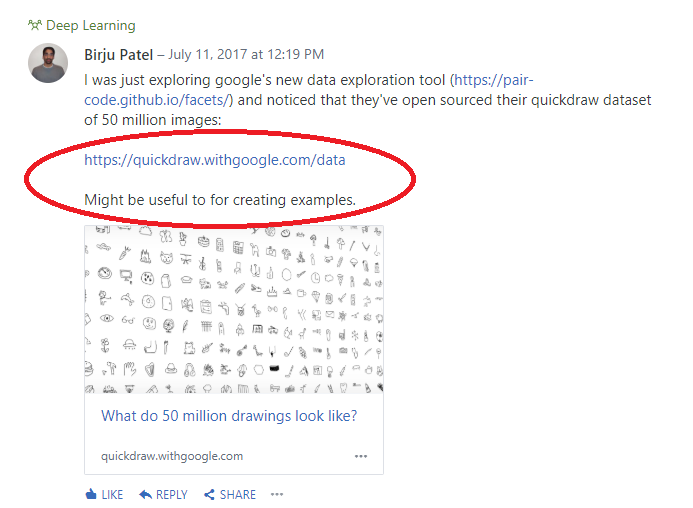 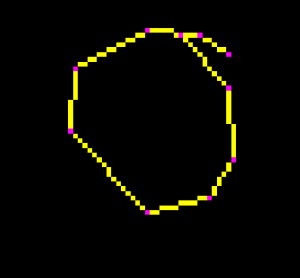 We do that for the remaining strokes, and we get: 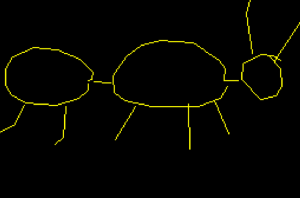 The yellow coloring is just for visual emphasis. The actual images will have a black background and white drawing.

Finally! A drawing slightly resembling an ant. Now that we can create images from these x,y points, we can create a function and quickly repeat this for all the ants in the file, and multiple categories too.     Now, this dataset assumes that people drew with a pencil, or something thin, since the thickness of the line is only 1 pixel.  We can quickly change the thickness of the drawing with image processing tools, like image dilation. I imagined that people would be playing this on a whiteboard with markers, so training on thicker lines will help with this assumption.   And while we’re cleaning things up, lets center the image too: 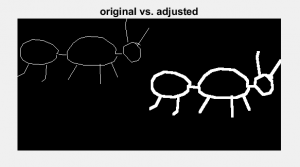 For this example, I pulled 5000 training images, and 500 test images. There are many (many many!) more example images available in the files, so feel free to increase these numbers if you’re so inclined. Create and train the network Now that our dataset is ready to go, let’s start training. Here’s the structure of the network: How did I pick this specific structure? Glad you asked. I stole from other people that had  already created a network. This specific network structure is 99% accurate on the MNIST dataset, so I figured it was a good starting point for these handwritten drawings. Here’s a handy plot created with this code:

I’ll admit, this is a fairly boring layer graph since it’s all a straight line, but if you were working with DAG networks, you could easily see the connections of a complicated network. I trained this with a zippy NVIDIA P100 GPU in roughly 20 minutes. Test images set aside give an accuracy of roughly 90%. For an autonomous driving scenario, I would need to go back and refine the algorithm. For a game of Pictionary, this is a perfectly acceptable number in my opinion.

Debug the network Let’s drill down into the accuracy to give more insight into the trained network. One way to look at the specific categories’ predictions is to create a confusion matrix. A very simple option is to create a heatmap. This works similar to a confusion matrix – assuming you have the same number of images in each category – which we do: 500 test images per category. 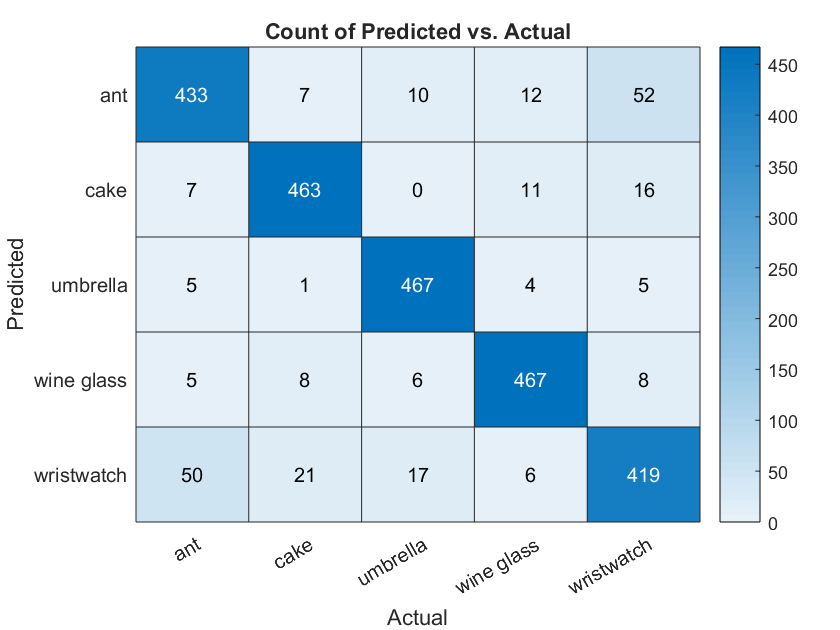 One thing that pops out is that ants and wristwatches tend to confuse the classifier. This seems like reasonable confusion. If we were confusing wine glasses with ants, then we might have a problem. There are two reasons for error in our Pictionary classifier:   If we are asking for a classifier to be 100% accurate, we are assuming that the person drawing never does a poor job for any of the object categories. Highly unlikely. Drilling down even further, let’s look at the 67 ants that were misclassified. 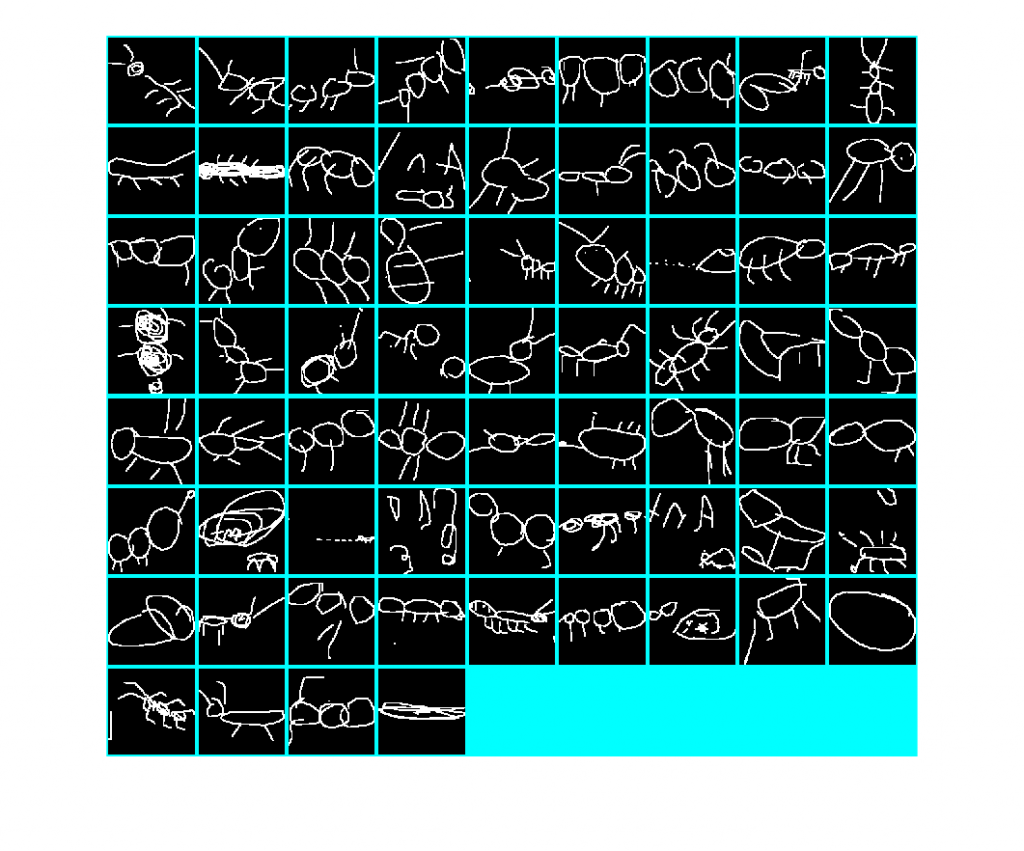 I’m going to go out on a limb and say that at least 18 of these ants shouldn’t be called ants at all. In defense of my classifier, let’s say that you were playing Pictionary, and someone drew this: 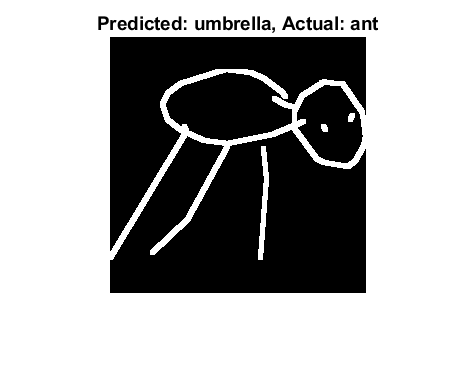 What are the chances you would call that an ant?? If a computer classifies this as an umbrella, is that really an error?? Try the classifier on new images Now the whole point of this example was to see what it would be like for new images in real life. I drew an ant... 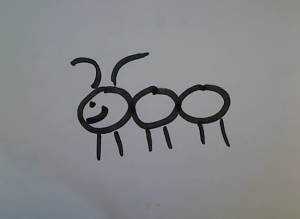 My very own ant drawing

...and the trained model can now tell me what it thinks it is. Let’s throw in a confidence rating too. 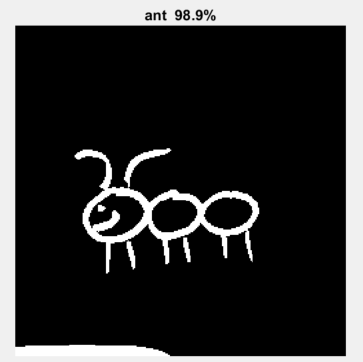 I used a segmentation function created with image processing, that finds the object I drew and flips the black to white and white to black. Looks like my Pictionary skills are good enough! This code is on FileExchange, and you can see this example in a webinar I recorded with my colleague Gabriel Ha. Leave me a comment below if you have any questions. Join me next time when I talk to a MathWorks engineer about using CNNs for Point Cloud segmentation!
|