Sometimes you would like change how a chart looks in a way which isn’t supported by the implementation of the chart. For example, you might want to change the color of one of the bars in a bar chart to highlight it. 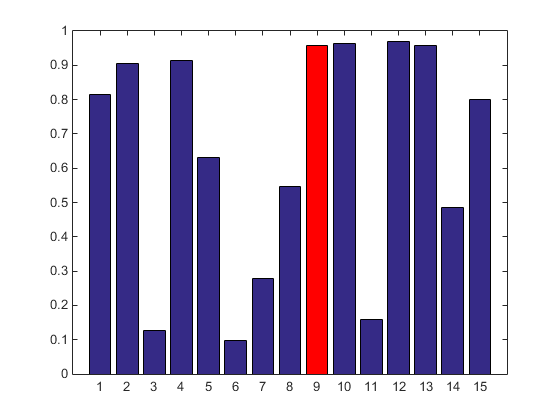 The bar chart currently doesn’t give you a way to do this. One way which immediately comes to mind is to find and modify the object which the bar chart created to represent that single bar. It turns out that doing this by fiddling around with the bar chart’s internals is actually not a great approach. There are a couple of reasons for this. Sometimes the charts are doing something which is trickier than it my seem. For example, if the number of bars gets really large, it might combine some of them for performance reasons. In addition, if the chart redraws, it might overwrite your modifications, and you’ll have to reapply them. Also, the details of a chart’s internals often change when you get a new release of MATLAB.

A better approach to this sort of problem is actually to create two separate charts. We can then give each of the two charts different attributes. Then we can highlight particular data values by partitioning the data between the two charts.

The easiest way to partition the data is to use the fact that the charts ignore any data values which are set to NaN. For example, we can recreate the picture above like this. First we create an array named ydata.

Next we create an array of logicals which is the same size.

We're going to put true into this array anywhere we want a bar to be red.

Now we can use hold to create two bar charts from these two arrays. 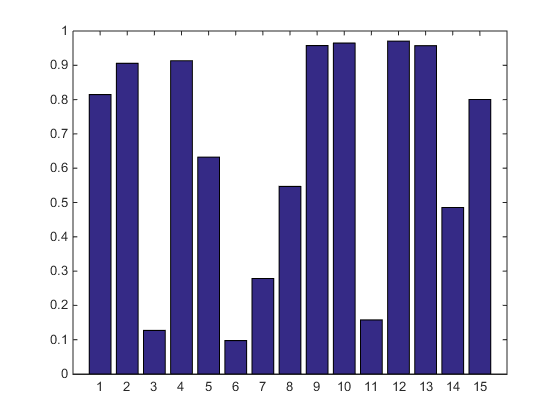 At this point, we can change any of the properties on either of the charts to make them look different. For example, to get the picture above, we’d set the FaceColor of the second bar to red. 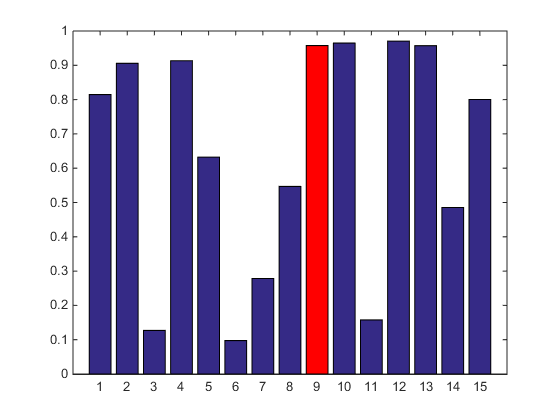 But we could change anything. Maybe you're Auric Goldfinger, and you'd like the highlight to look like a big gold bar. 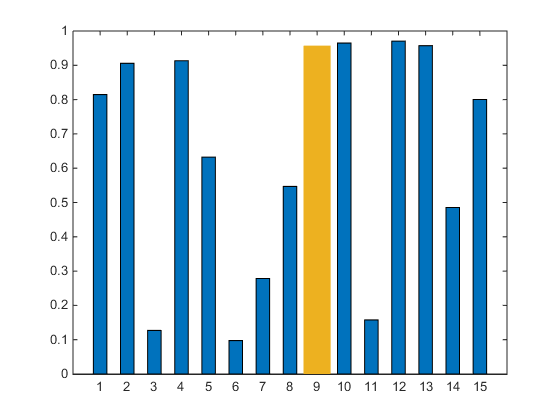 OK, now that we have that basic trick, let’s go crazy with it. We’ll build a simple interactive app which lets us click on the bars to change which ones are highlighted. To do that, we’ll need to listen for clicks and use that to change the contents of the two arrays.

The function btndwn will get called every time one of the bars gets clicked on. When that happens, we create new YData arrays for the two bar charts. We do this by updating the entry in the logical array sel which corresponds to the bar which was clicked on. Let's start clicking!

You can use this same technique with other types of charts. For example, check out this contour plot with major & minor contour lines. You can find out how to create this on the doc page Combining Different Visualizations. 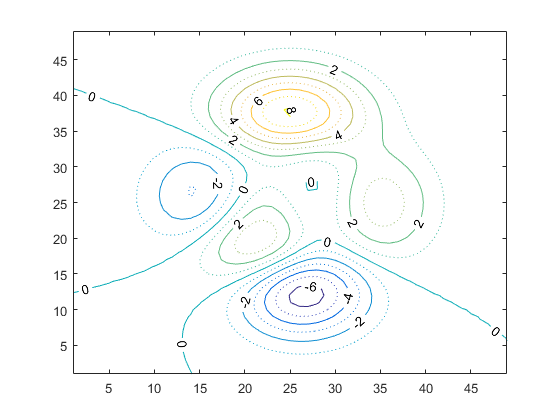 What can you create using this technique?