Mother Nature was in a cranky mood this past week. The Philippines dealt with the wrath of Typhoon Mangkhut, while the east coast of the United States suffered through Hurricane Florence. Yes, it is hurricane and typhoon season, but there sure seems to be an abundance of disastrous storms.

For years now, scientists have been warning that extreme weather will be the new normal of a warming world with warming seas.  According to the South China Morning Post, a study published in 2016  showed that “storms hitting China, Japan, Korea, and the Philippines had grown 50 percent stronger on average since 1977, largely due to the warming of oceans.”

But until recently, there was no method to predict the impact of climate change on a single weather event.

National Geographic, reporting on Hurricane Florence, stated, “The rainfall is projected to be more than 50 percent worse than it would have been without global warming, a team of scientists say. The hurricane’s size is predicted to be about 50 miles (80 kilometers) wider for the same reason.”

National Geographic was referring to a recently published report, “The human influence on Hurricane Florence.”  The report was issued on September 12th by a group of researchers from Stony Brook University, in conjunction with the National Center for Atmospheric Research. Lead by Dr. Kevin Reed of the Climate Extremes Modeling Group at Stony Brook University, the team simulated the size and rainfall that would have been associated with Hurricane Florence if the global temperature was at pre-industrial, 1850 levels.

The report is the first time scientists have connected a single extreme weather event to climate change. “This is the first time we’ve done this predictively,” Michael Wehner, a climate scientist at the Lawrence Berkeley National Laboratory told National Geographic. “Climate change increases the amount of water in the atmosphere that can rain out in a hurricane. It also changes the structure of the storm to make it more efficient at precipitation.” 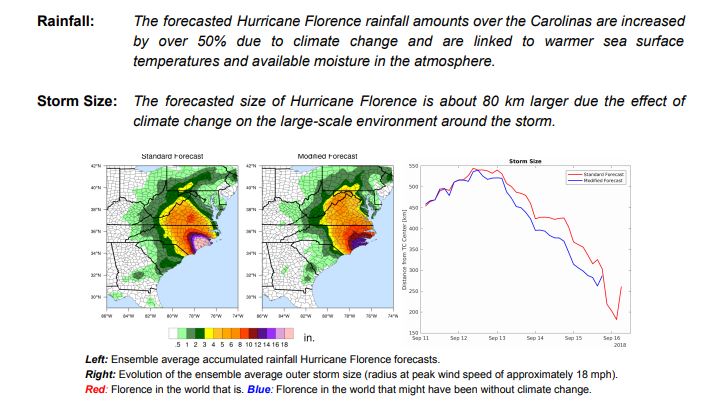 The report compares the actual forecasts for Florence to what could have occurred had the temperatures of ocean waters and the atmosphere been cooler. The simulations also set the greenhouse gas concentrations, solar radiation conditions, ozone concentrations, and aerosol concentrations to pre-industrial levels. The team used MATLAB for preliminary analysis, the global atmospheric model CAM5, and NOAA’s Global Forecast System for this report.