You may have heard about the upcoming US election. There’s been a ‘bit’ of news coverage on the subject. Going back to the purpose of the “Behind the Headlines” blog, this post is to share the role MATLAB plays in an issue that drives today’s news: It’s hard to imagine a recent news story that has received more coverage, in the US at least, than next week’s election.

Throughout this election, polls and pollsters have played a significant role, just as they did for the Brexit vote earlier this year. In fact, NBC News recently compared the polling in both elections in their article “No, the Presidential Election Will Not Be the Next ‘Brexit’ for Pollsters.” This post turns to psephology, the study of scientific analysis of elections, to examine polling results.

The Princeton Election Consortium is a blog written by Dr. Sam Wang. In addition to his role as a professor of molecular biology and neuroscience at Princeton University, Dr. Wang authors the PEC blog which utilizes meta-analysis to predict the winner of the Electoral College. Meta-analysis is a statistical approach that combines the results from multiple studies in an effort to increase the accuracy as compared to the individual poll results. It is often used to resolve uncertainty when polls disagree. 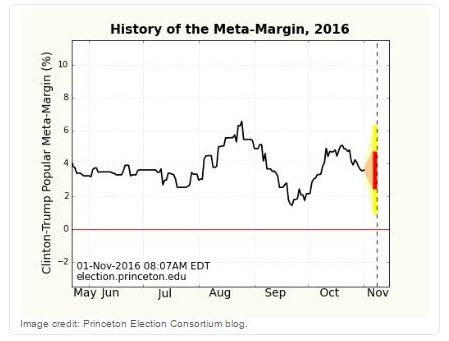 Meta-analysis of state polls provides more objectivity and precision than looking at a single poll and gives an accurate, current snapshot of the state of play. Over the course of the campaign, the PEC site has attracted over a million visits.

How MATLAB is used

Professor Wang uses MATLAB for his calculations throughout the site. Here are some pages with references and/or MATLAB code.

So here’s to the end of the election, and thankfully, the end of political ads for now. Click here to see the latest forecast at the top of the PEC page.