There is an area the size of Colorado in the Pacific Ocean that has a rather unique claim to fame. Located part way between Hawaii and California, this region is a gathering spot for hundreds of Great White Sharks. Each year, the sharks travel for over a month to this location dubbed the “White Shark Café”, and scientists want to know why. 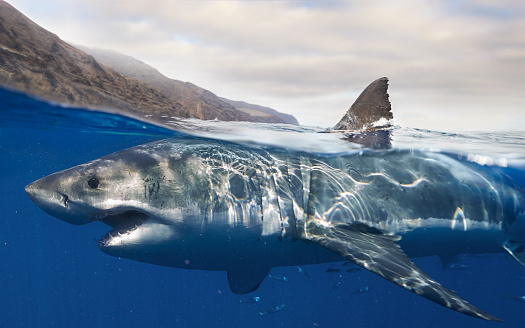 Scientists had examined satellite imagery of this area and thought the location was the equivalent of an ocean desert with minimal living creatures. When researchers from Stanford University and the Monterey Bay Aquarium began tagging and tracking sharks, they were surprised to find the Great White Sharks spent a considerable amount of time in this region. The sharks typically congregate in the region for two to three months each year, while some sharks stay for considerably longer.

According to Newsweek, “They documented surprising behavior in the animals indicating that a poorly understood section of the ocean—known as the “mid-water,” which sits just above the complete darkness of the deep sea—is filled to the brim with small animals which attract larger creatures that the sharks may be feasting on. This suggests the Café is not as barren as previously thought.”

The tags did more than track the location of the sharks. They also monitored the sharks’ behavior once they reached the Café. The tags recorded data at 3-second intervals, including light, depth, acceleration, and temperature. Light data was used to estimate the position of the shark using light-based geolocation algorithms.

The tags helped the scientists discover some unexpected behavior: The sharks often dive to 1400 feet during the day and come back to 650 feet at night. The initial research, published in the research paper, Eating or Meeting? Cluster Analysis Reveals Intricacies of White Shark Migration and Offshore Behavior, used MATLAB to process the data.

“It’s the largest migration of animals on Earth — a vertical migration that’s timed with the light cycle,” Salvador Jorgensen, a scientist at the Monterey Bay Aquarium, told SFGate.

The sharks completed more dives per day when in the Café than when they were in regions such as the Hawaiian coast. Male sharks were observed diving up to 140 times per day.

Based on the earlier success of tagging and tracking sharks, the team designed a new pop-off tag. This time, the tag incorporated a camera that could record up to 10 hours of video, giving the researchers a front row seat to the sharks’ surroundings on their deep-water dives. The issue was the camera had to turn on at just the right point in the months-long journey to catch the sharks while diving in the Café.

“It’s easy for biologists like myself to sort of, dream things that we would love to study. But somebody’s got to design these things and put them together and make them work,” says Sal Jorgenson, Senior Research Scientists at the Monterey Bay Aquarium.

“So, it’s a lot like a Fitbit that monitors how fast you are riding, what latitude you are at, and it’s on there for months,” says Thom Maughan, software engineer, MBARI.

The ability to turn on the video at interesting times is key. The camera tag is attached to the shark at the coast and remains dormant for the months it takes for the shark to reach the Café. But since the camera can only capture hours of video, the  team wanted the camera to turn on only when certain shark behavior was identified. The researchers specifically wanted to capture video when the sharks were exhibiting the unusual diving behavior.

After processing shark tag data from the earlier study, they wrote an algorithm in MATLAB that identifies behaviors of interest. The algorithm is embedded on the ultra-low power microprocessor embedded in the animal tag. The Shark Café Cam is switched on when a behavior of interest is detected. The algorithm also triggers high-res data sampling.

The tags are designed to safely pop-off the creatures and signal satellites so that the researchers can gather the tags and the new data. In an expedition earlier this year, the team was able to gather data from 10 of the 22 tags. The tags floated up and signaled the ship that they had detached and were bobbing around ready to be collected. While they were able to collect some transmitted data, such as location, from the remaining tags, they weren’t able to recover all 22 tags.

The following video from Stanford’s Schmidt Ocean Institute and MBARI details the tagging of the sharks. The researchers are currently analyzing the data collected earlier this year.