When I wrote a post on COVID-19 in February, the death toll was 425 with a total of 20,000 confirmed cases. Now, a mere six months later, the numbers have climbed to a staggering 700,000 deaths and nearly 19 million confirmed cases worldwide. While some countries have been able to slow the spread, the virus is accelerating in many regions.

Experts warn that the key to stopping the spread of the virus and reopening the global economy is testing and then isolating those that test positive before they can spread the disease to others. In hotspots, that means testing people once or twice a week as they go to and from work or school. STAT states, “Safer reopening will require millions more Covid-19 tests per day.”

Testing efforts in the United States and other places have been plagued by shortages of supplies, due to the soaring demand as new hotspots develop. “The average test delay is too long,” Dr. Collins, the director of the National Institutes of Health, told The New York Times. “That really undercuts the value of the testing, because you do the testing to find out who’s carrying the virus, and then quickly get them isolated so they don’t spread it around. And it’s very hard to make that work when there’s a long delay built in.”

India, the world’s second-largest country now has the fastest-growing outbreak, seeing a 20% increase just last week. “The actual number of cases is likely an order of magnitude higher, as India has one of the lowest testing rates in the world, having completed about 11.8 tests per 1,000 people; in the U.S., that figure is 152.98, according to the University of Oxford’s Our World In Data project,” says New York Magazine.

So, how do you test more people without using more testing supplies and lab time? Health officials are increasingly proposing pooled testing—mixing several people’s biological samples and examining them in a single test—to drastically boost the capacity without increasing the number of tests. It works best when the prevalence of the disease is low: But testing such populations in this manner can increase the availability of individual tests in hard-hit areas. According to Smithsonian Magazine, “Pooled testing could be the fastest and cheapest way to increase Coronavirus testing.”

There are multiple ways to implement the pools. Samples from approximately 20 people are combined into a single pool. One coronavirus test is used on the entire pool. If the test comes back negative, researchers know they can move on to another pool of samples. If it comes back positive, only then would each individual be tested. In the simplified example below, a group of 27 people can be tested with as few as 12 tests. 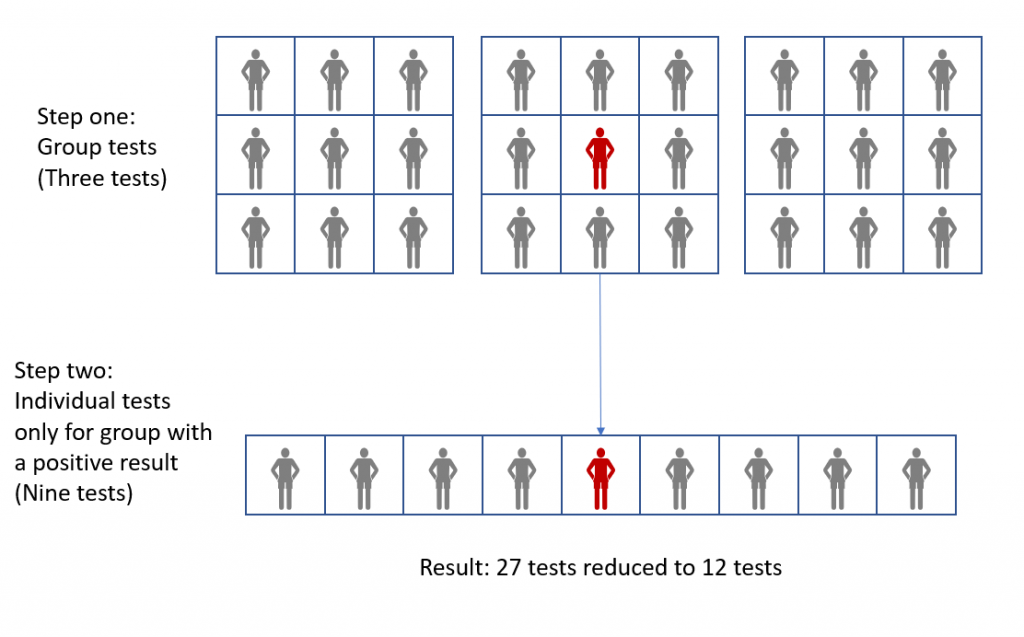 Another issue to consider is how dilution affects the result. “That specimen in the pool has been diluted by the rest of the specimens,” says Dr. Chris Pilcher, a professor of medicine at the University of California, San Francisco. “So, there’s a decrease in the amount of stuff you want to detect in the specimen. And that results in a corresponding decrease in the sensitivity of detection for the test.

“The reason pool testing can be used for COVID is that the viral load is high-enough that even in diluted samples, it can be detected. Research from Europe and China showed the coronavirus’ viral load — a measure of just how many pieces of the virus are present in a person’s sample — tends to reach high levels quickly in typical infections.”

Professor Lakshmi Narasimhan Theagarajan, Indian Institute of Technology Palakkad, studied the efficiency of group testing for COVID-19 using polymerase chain reaction (PCR)-based testing. PCR is a method widely used to rapidly make millions to billions of copies of a specific DNA sample, allowing scientists to take a very small sample of DNA and amplify it to a large enough amount to study in detail.

The study, Group Testing for COVID-19: How to Stop Worrying and Test More, looked at issues such as dilution. It found PCR-based testing could still perform well, but that the approach to pool testing should be modified depending on the projected rate of infection in a population. The study analyzes the benefits of different types of groupings and identifies which work best in different scenarios. For example, probabilistic group testing (PGT) works best in locations with higher infection rates, while combinatorial group testing (CGT) requires fewer tests when areas have a low infection rate. 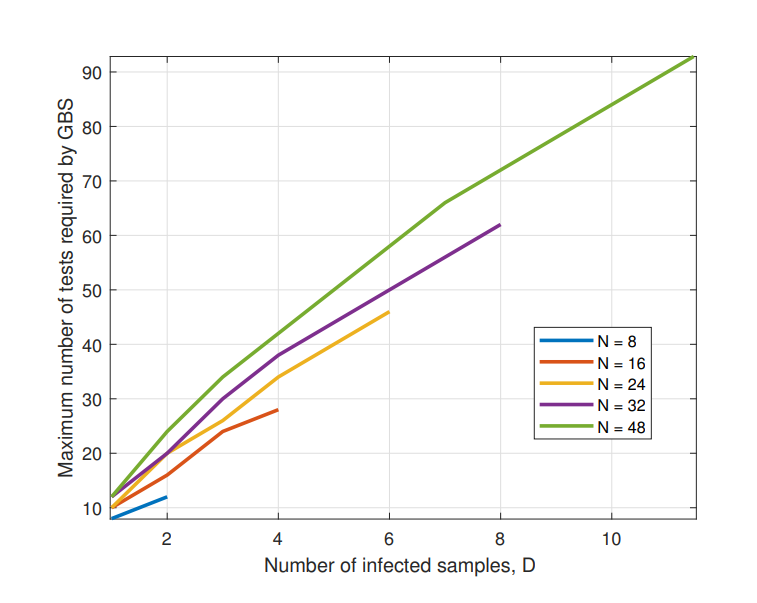 “We study the effect of dilution due to pooling in group testing and show that group tests can perform well even in the presence of dilution effects,” states Theagarajan. “We present multiple group testing algorithms that could reduce the number of tests performed for COVID-19 diagnosis. We analyze the efficiency of these tests and provide insights on their practical relevance. With the use of algorithms described here, test plans can be developed that can enable testing centers to increase the number of diagnoses performed without increasing the number of PCR tests.

“My research is broadly in the areas of sparse data processing and statistical inference. I have been using MATLAB for almost the past 15 years mainly due to its toolboxes and in-built libraries, with which I need not reinvent the wheel, but implement my algorithms and ideas as quickly as possible; thus, giving my research a quick turnaround.”

The MATLAB code for generating the test plans is available online.

Pool testing has been deployed in many locations around the Globe. In Rwanda, they found it to be faster and more economical. Germany and Israel have implemented pool testing, and a professor from the University of Hong Kong has proposed looking to those examples to boost testing capabilities locally.

As more areas struggle to meet the needs of testing, pool testing may hold the key to containment.