Despite the lack-luster title of this entry, I assure you that this new feature will be well worth the read, as it addresses one of our most common user requests!

In R2007b, you’ll notice a fancy new run button to the left of the debug toolbar (see Figure 1 below). The new split-button has a green play icon imposed on a document. Pressing the left side (with the icon) runs the currently selected configuration (I’ll explain what a configuration is in a minute), while pressing the right side (the downward facing arrow) will show you all the configurations for the file being edited.

Let me note that if you want to run your file as you used to, simply press the run button. Now, if you’re a little curious about what these new configurations can offer you, read on! 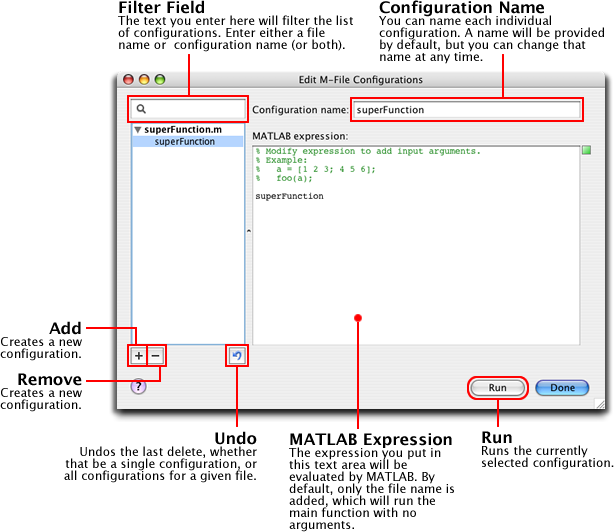 Notice that by default, the name of the file you’re editing (which should also be the function name) is inserted into the default configuration as well as any subsequently created configurations. Running such a configuration would be identical to typing the file name at the command prompt.

This seems like such a complicated way to run a file, you say…ahh, but we haven’t arrived at the good part yet! Say your function (we’ll call it superFunction) takes an input argument. Previously in the MATLAB Editor, there would have been no way to run your function. You would have been forced to go to the command window and type superFunction(1234).

Configurations are currently stored in a binary file, but we’re actively working on making their storage more transparent.

Configurations should help you stay focused on writing and testing your code…let us know what you think!