This week I’d like to introduce guest blogger Joachim Schlosser. Joachim leads the team of Education Technical Specialists in Europe, supporting professors and teaching staff using MATLAB & Simulink in education. His mission is to serve development organizations, universities, professors and engineers in all stages of their career to best leverage their proficiency by finding out what kind of methodology and tools are of greatest use for them. You can find Joachim on Twitter, LinkedIn and Google+.

Dancing in the Spotlight

I love trade shows and conferences, because you get the opportunity to speak with people creating very different things all on one day. The Embedded World trade show, held each year end of February in Nuremberg, Germany, is such an event. Every time it is amazing to see the breadth of topics that people approach us on, and it is fun to discuss and find out which of our tools around MATLAB & Simulink can make them successful.

People might stop because they see our hostess Anna making the cute little Nao robot dance, but they come into discussion because they get the vision about what they could achieve themselves. What they see on the booth is just a catalyst for people’s own insight and needs, just a starting point to evaluate which tools serve best their applications. 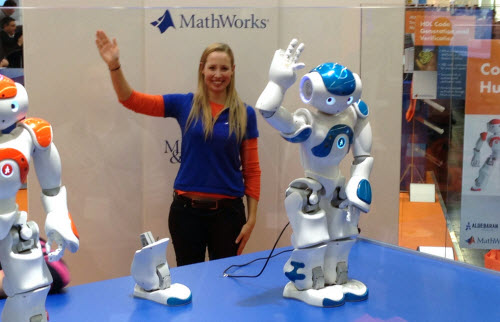 Enter booth visitor John (not his real name) from Ynapmoc, Inc. (not his real company), a small to mid size manufacturer with 40 years of experience in the area of medical devices (not his real industry). When he approached me, he said he stopped because he noticed we somehow analyze the real picture data, and he was curious to find out more. He then found yet another demonstration in the booth where a Simulink model made an Arduino board with a webcam track and follow a colored ball. Think of it as a stripped down version of this one, but you get the idea.

Now the reason John was curious is because they are abstracting movements of people filmed in their lab to detect anomalies in their muscle tissue functions and provide a self-assessment tool (not his real application). They had been coding it by hand, with little possibility to do fast prototyping, and with additional effort to adapt the functionality each time they got another camera, each time they have another idea to make the algorithm better. To see that he could do video processing in Simulink was a relief to him, since he knew it from his engineering studies. To see additionally that he could real-time prototype on a low cost Arduino board made John enthusiastic.

Well, it’s not just possible to simulate an entire plant’s grid, Transpower from New Zealand went a bit further and simulated the entire national grid. They do this to calculate the reserve they need to provide in order to maintain grid stability. So, Lynn has made her next step in solving her challenge, discussing the scenario with one of our Application Engineers to find out the exact needs and a plan for implementing the solution.

Now what if you combine both, image processing and control?

Enter Nao (its real name) from Aldebaran (its real company). Nao is the little robot from the beginning of this story. Think of movement. Think of control theory. Think of feedback control. Think of Simulink. And now attach Microsoft® Kinect® with its support in MATLAB & Simulink, one of the many hardware resources for project-based learning. Kinect provides a 3D image of a person, which is transformed into a mesh in MATLAB & Simulink, allowing it to calculate trajectories for the robot. The rest is normal control system theory with Model-Based Design. 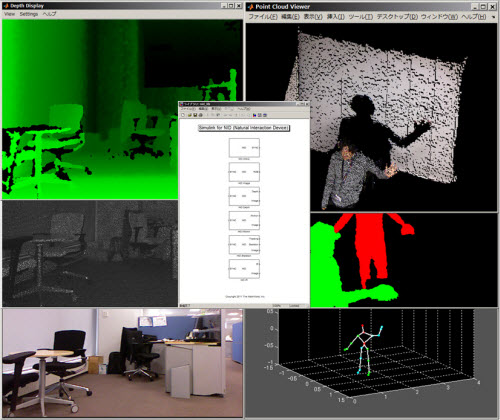 You get: A dancing machine being able to mimic movements of a human. A lot of fun in the realms of engineering, science, commercial and education developments, controls, video, data analysis. And lots of nice discussions with bright people of different disciplines who either are already using MATLAB & Simulink or are exploring their way into doing so. To live and breathe their art.