This week I’d like to introduce guest blogger Dr Tanya Morton. Tanya leads the Application Engineering team in the UK, helping customers in industry and academia to apply MATLAB & Simulink to their technical, business and educational challenges. She is keen to encourage more people to enjoy lifelong careers in science, technology, engineering and mathematics. You can find Tanya on Twitter and LinkedIn.

Earlier this year a colleague and I were bouncing around ideas for ways to do more outreach with the local student community. He pointed behind him and said, “Why don’t we make use of the empty space in the new office to host a robot contest?” An idea was born…

Last Friday, this idea came to fruition when MathWorks hosted a Student Robot Challenge. Nine teams from the University of Cambridge participated in the contest. The challenge was to develop a controller for a LEGO MINDSTORM NXT robot to make it visit a set of 12 locations on an arena in the shortest time possible.

After a briefing, the students started working their way through short tasks designed to bring them up to speed with Simulink, the principles of controller design, and the process of generating code to run on the robot. Within five minutes, you could hear the first robot spinning on the spot. 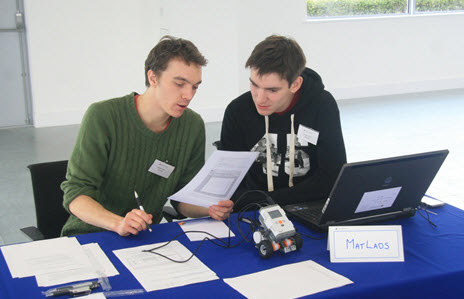 In the afternoon, the students explored a variety of navigation and control strategies, which they tested using a combination of simulation and hardware testing on their robot.

The day ended with a final contest where the teams competed against each other to navigate to the most locations in the shortest time. Team names were picked out of the hat to decide the running order for the final contest. The first to go was the QED-grad team, an experienced team of PhD engineering students. The team successfully hit all 12 locations in a time of 1 minute and 41.3 seconds. Their robot left each location quickly, but tended to spiral around the next target rather than approach it directly. 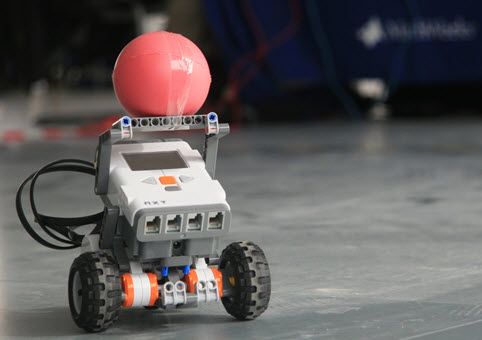 The LEGO robot with positioning ball used in the final arena

Five of the next seven teams were not able to complete the course within the 3-minute time limit. One of these teams was QED-’12, a team of first-year undergraduate engineers who had been taught to program LEGO by the QED-grad team. Briefly, it seemed that the youngest team in the competition were going to beat their lab demonstrators; however, their robot stopped at the 11th point because they had forgotten to program in the 12th. An important lesson learned! Only the team of PhD mathematicians on Team CCA came close to the time of the QED-grad team with a time of 1 minute and 44.5 seconds.

The last team to go was MatLads, with its leader Richard Peach, a 3rd year undergraduate engineer. MatLads’ robot moved neatly around the course to knock the QED-grad team off the top spot to win by a mere 1.6 seconds! 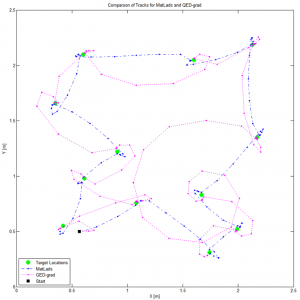 It was an exciting finale to a fun event. The students enjoyed the project-based learning experience and gained some valuable skills to help them in their future careers. 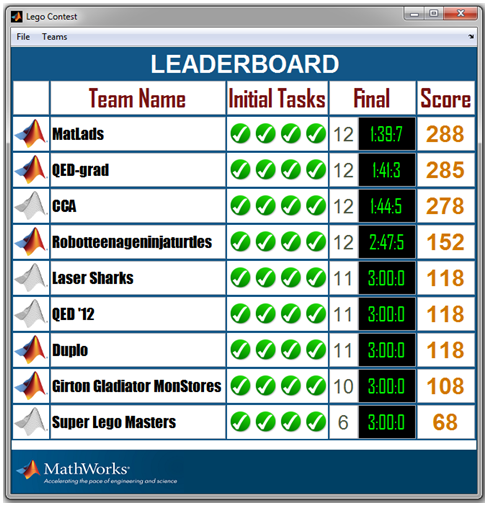