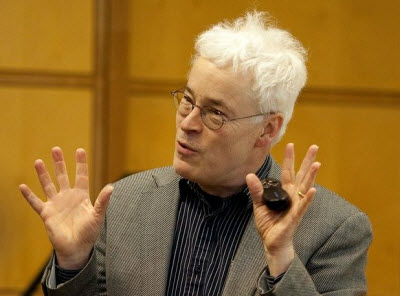 Nick is what you might call a “heroic user” of MATLAB. He was there at the first class in which Cleve introduced the original FORTRAN MATLAB as a teaching tool. Near the lobby of the main MathWorks building here in Natick, we have a framed copy of the very first purchase order for MATLAB. Who bought that first copy of MATLAB? None other than Nick Trefethen. And it’s not merely a question of precedence or longevity. Across his long career, Nick has been a contributor of the highest order to the ecosystem of mathematical code written in MATLAB. He is the author of many books, an influential educator, and most recently he has been leading an innovative open source software project, a project that grew out of work he initiated back in 2002: Chebfun.

I can personally attest that the examples associated with Chebfun are among the most beautiful and thoughtful you will find documenting any mathematical project on the web. We recently conducted a virtual interview with Nick to learn about the latest release of Chebfun. Here’s what we learned.

Q: When did you first start using MATLAB?

A: I took a course from Cleve Moler when I was a graduate student at Stanford, so I must have typed x = A\b for the first time around 1978. When MathWorks started selling MATLAB, I bought the very first copy! That was in February, 1985. It was about ten years later when MathWorks told me I had been the first.

Q: What is Chebfun?

A: Chebfun is a system written in MATLAB that looks and feels like MATLAB, except that vectors and matrices become functions and operators. Whenever MATLAB has a discrete command, Chebfun aims to have the same command overloaded to execute a continuous analogue. For example, SUM(f) gives you the integral of a chebfun f over its interval of definition, MAX(f) gives you its maximum, ROOTS computes the roots, and so on.

Q: Why is it called Chebfun?

A: Well, Chebfun stands for Chebyshev-functions. Our algorithms are based on representations of functions by piecewise Chebyshev polynomial interpolants. The details are given in my book Approximation Theory and Approximation Practice.

Q: This Chebyshev fellow must have been an interesting character. Can you tell us a little more about how his name came to be associated with your favorite functions?

Q: A new version of Chebfun has recently been released. What is different in this release?

A: The big thing is that the code has been completely rewritten in a more modular structure and released on GitHub; we are a fully public open-source project. There’s also a beautiful new web site at www.chebfun.org, with a user’s guide and hundreds of examples showing how to use the code. Besides that there are many speedups and a number of new features, notably the capability of taking advantage of periodicity of functions (i.e., Fourier as opposed to Chebyshev methods). And the two-dimensional side of Chebfun, for representing functions f(x,y), keeps advancing.

Q: Why have you released Chebfun on GitHub?

A: We’d like to encourage new users and new developers. Broadening the Chebfun community seems the best way to make the software develop as strongly as possible and ensure its long-term future. (We have thousands of users already, but we don’t know as much about them as we would like.)

Q: What benefit do you see in the MATLAB File Exchange / GitHub integration?

A: So far as we are aware, Chebfun is the most advanced project written in MATLAB. It’s completely natural that it should be easily available from the File Exchange. We are very pleased at this new development.

A: We think every MATLAB user is potentially a Chebfun user, for every MATLAB user works with functions. It’s so much simpler and more natural to call SUM, MAX, ROOTS and so on than to worry about the calling sequences of QUAD, FMINBND, FZERO. In 2D, the same commands find integrals and extrema and roots of functions f(x,y). Chebfun is also the easiest way to solve ODE boundary value problems. We’ve overloaded x=A\b to u=N\f, where N is a differential operator with boundary conditions and f is a right-hand side.

The big advantage in all these computations is that we’re always dealing with functions (chebfuns), they all take the same form, and the user doesn’t have to know anything about the underlying grids. Input to SUM or MAX or ROOTS — just a chebfun. Output from \ for ODEs — just another chebfun. This is very different from the traditional style of computing in MATLAB and other languages with codes like BVP4C/BVP5C where for each code you need to learn a calling sequence that may involve specification of an initial grid and the code’s special structures like “DEVAL” for representing output functions.

A: Just go to the File Exchange, or google Chebfun. Be sure to check out the People page with its photo-bios of Chebfun developers including Nick Hale, Toby Driscoll, Asgeir Birkisson, Alex Townsend, Anthony Austin, Grady Wright, and Hrothgar.