Mike Croucher (@walkingrandomly) is the director of research computing at the University of Leeds in the UK. For years he has kept his Walking Randomly blog where he writes about technical computing of all kinds. In addition to the blog, he manages a GitHub repository filled with awesome MATLAB projects. It is called, fittingly, Awesome MATLAB.

The “awesome” pedigree on GitHub is actually quite extensive. I don’t know exactly where it began, but many years ago, when dinosaurs roamed the earth, there was an Awesome PHP list. This much-loved list was widely copied, leading at some point to an Awesome Machine Learning list which inspired an Awesome R list which inspired Mike to make an Awesome MATLAB list. Thanks Mike! As Mike points out in his post, there is even a List of Lists Awesome ecosystem page. Meta-Awesomeness, you might call it.

There are a lot of “Best of” lists out there, but these GitHub-based lists are nice because they have the collaborative machinery of git to keep them up-to-date. If you want to submit an entry, fork the repo and send Mike a pull request!

I should also mention that this is not the only such MATLAB repo on GitHub. You should also take a look at uhub’s awesome-matlab repo with almost 1900 files.

Increasingly we are seeing GitHub as the de facto standard for collaborative development. Back in 2014 we gave you the ability to list your MATLAB-related GitHub repos on the File Exchange. The rate at which these repos are appearing has been accelerating, and we now have 1640 repos listed on the File Exchange. 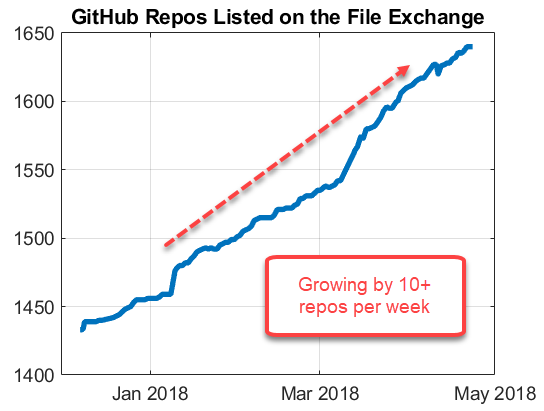 This includes many of the most popular files, like export_fig, MATLAB Schemer, and MATLAB2TikZ.

If you’re serious about collaborating on your MATLAB code, we encourage you to put your code on GitHub and then list it on the File Exchange.