Earlier this month, the National Oceanic and Atmospheric Administration (NOAA) released its report State of the Climate in 2015, which showed extreme drought occurred on every continent in the past year. It also reported the amount of land considered to be under the effects of either severe or extreme drought increased from 8% in 2014 to 14% in 2015. 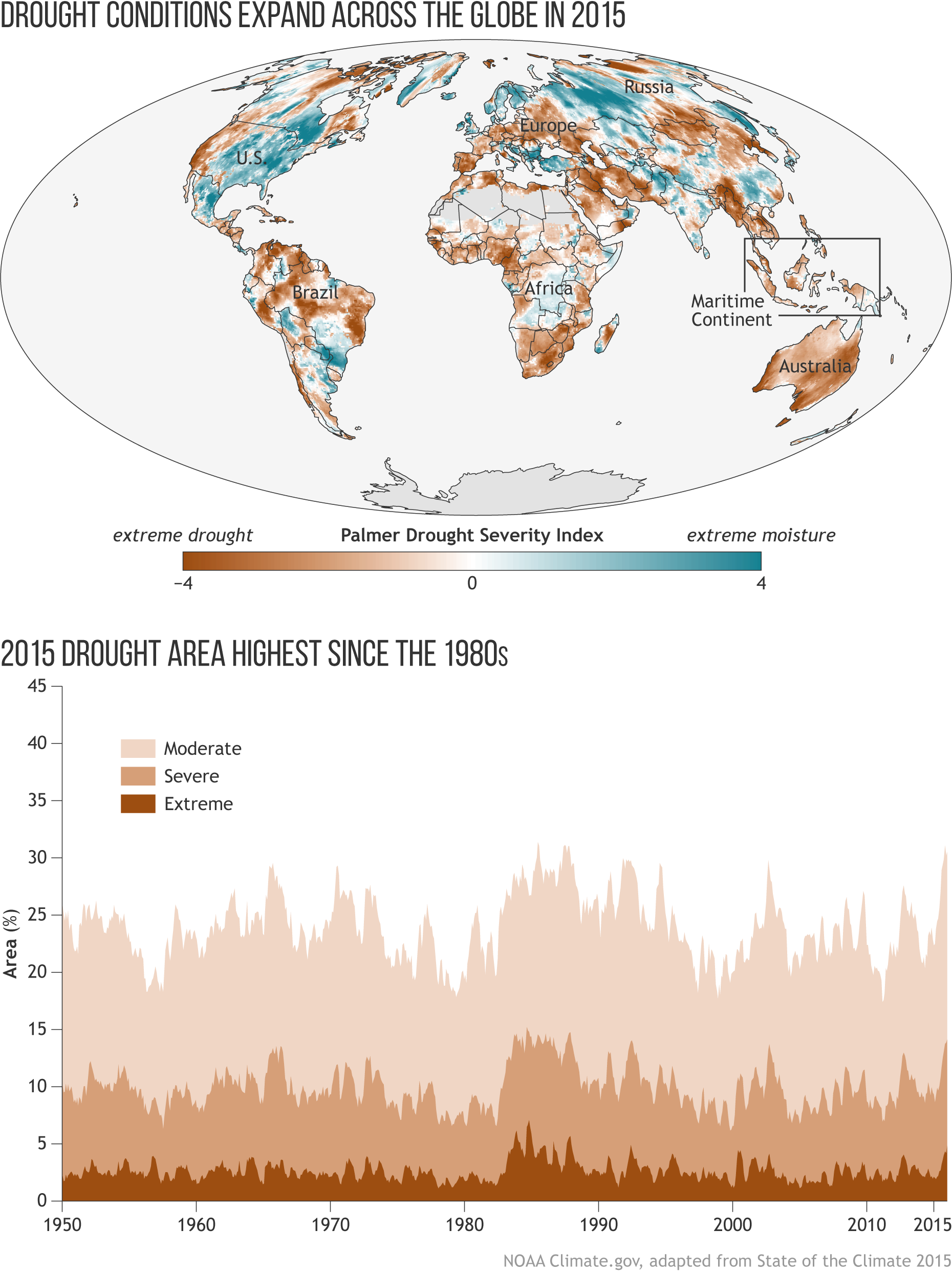 2015 drought map and histogram. Image credit: NOAA Climate.gov. Adapted from the State of the Climate in 2015.

Drought can have devastating effects on the environment and the society. It has been linked to economic, environmental, and social impacts such as crop loss, natural habitat destruction, and poverty. According to CNBC, the total economic loss last year in California alone was approximately $2.7 billion and drought  resulted in 21,000 jobs lost statewide. In extreme cases, drought can cause famine and warfare.

What if there was a way to accurately predict drought?

While drought conditions have occurred year after year for decades, the severity, duration, and location have varied. At this point, eliminating drought is not feasible. But if we could accurately forecast drought, could we lessen its effects?

Climatologists have been developing drought prediction models for just this purpose. Many have used machine learning techniques such as artificial neural networks (ANN) and support vector regression (SVR) to train their models. In addition to machine learning, some researchers are exploring adding wavelet transforms to their models. Hybrid approaches have included wavelet-ANN (WANN) and wavelet-SVR (WSVR) models.

In a study recently published in Atmospheric Research, Coupling machine learning methods with wavelet transforms and the bootstrap and boosting ensemble approaches for drought prediction, researchers from Carleton University and McGill University coupled wavelet transforms and ANN and SVR models with bootstrap and boosting ensembles for the purposes of drought predictions:

“This study predicted the Standardized Precipitation Index (SPI) using a combination of the bootstrap and boosting techniques with ANN and SVR models. In addition, wavelet analysis was used to preprocess the SPI data series.”

The study showed that wavelet analysis could improve the accuracy of the different machine learning techniques considered:

“The ability of wavelets to de-noise time series data was shown to be helpful in predicting the SPI. The use of ensembles, in the form of boosting and bootstrap models, allowed the models to be more robust.”

It also showed that machine learning could be utilized to accurately calculate the potential for a given area to experience drought.

For more information, check out our wavelet tech talk  or machine learning videos.