Sir Isaac Newton would be proud of the new £1 coin. After joining The Royal Mint in 1696, Newton took on counterfeiters with a combination of science and art. He introduced features, such as grooved edges on coins, to make it next to impossible to counterfeit Britain’s currency. He believed that the best way to deter counterfeiting was to create the highest quality coin. 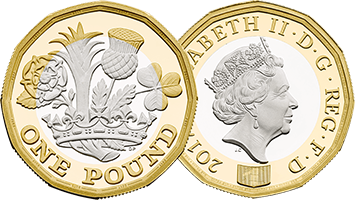 The Royal Mint and the new £1 coin

The overt security features of the new coin are designed to make the coin extremely difficult to copy. They include a 12-sided shape, micro-lettering on the lower inside rim on both sides of the coin, a bimetallic finish, alternate milled edges, and a latent image that works like a hologram.

But it’s the combination of overt features and a covert security feature that makes this coin the most secure coin in the world. It is this covert feature that also enables coin handling machines, such as those used in banks, to determine authenticity.

The technology that The Royal Mint has adopted in its High-Security Feature has been used in other sectors, such as the banknote industry, for a number of years. It has now been successfully transferred to metals and coinage for the first time by The Royal Mint’s team of expert scientists.

The Telegraph reported, “According to patent experts at Ashfords International Patenting Services The Royal Mint’s technology ensures that the special particles don’t merely form a coating, but are actually part of the alloy of the material forming the new coin.”

When researchers presented their work on the 12-sided £1 coin at the recent MathWorks event, they described how the battle against counterfeiting in the coin industry has driven innovation. The move to adopt electromagnetic signatures has enabled machines to authenticate coins, much like they do for passports and banknotes.

When a new £1 coin is produced, a patented chemical inclusion is deposited during the nickel-plating phase. Since it is dispersed throughout the nickel layer, it will last the entire time the coin is in circulation, resistant to both chemicals and wear.

This is a finely controlled process: too little and the coins fail to register in the detector, too much is a waste of costly materials.

During their development, The Royal Mint tested the distribution of the inclusion by preparing metallurgical micrographs and then analyzing the degree of clustering with a MATLAB algorithm. By automating this process, the analysis time was reduced by 50%. MATLAB image processing capability then enabled them to detect the level of dispersion throughout the nickel plating and adjust the process to obtain a more uniform dispersion.

Over 100 million coins were manufactured initially. Before the coins were ready for distribution, a detection algorithm was developed to enable the technology to verify coins at a rate of 1000 per minute.

1.4 billion new £1 coins have been created and no counterfeits have been reported. Sir Isaac Newton would indeed be proud.