Jason Barnes had wanted to be a professional drummer since he was a teenager. At age 22, Barnes lost his arm after an industrial accident at work. The accident occurred three days before Barnes was set to audition for the Atlanta Institute of Music and Media (AIMM).

After an extended hospital stay and multiple surgeries, he set his mind on returning to drumming. Barnes taped a drumstick to his still-bandaged arm a few days after returning home and began to play. Despite the pain, he was determined to keep drumming.

He later created a homemade prosthetic using a spring-loaded drumstick and was admitted to the AIMM. But his prosthetic didn’t give him the control he needed. With a fixed stiffness, every stroke sounded the same. His professor at AIMM introduced him to Professor Gil Weinberg, Founding Director at Georgia Tech’s Center for Music Technology. 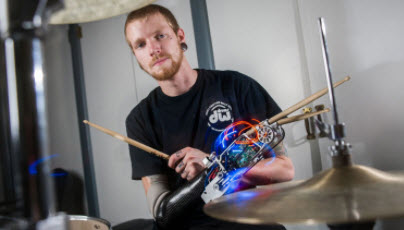 Weinberg led a team at the Georgia Tech that created a robotic drumming prosthesis for Barnes. It has motors that power two drumsticks. The first is controlled both physically by Barnes’ arm and electronically using electromyography (EMG) sensors on his bicep. The second drumstick is autonomous, listening to the music being played and improvising a complimentary beat. It is a wearable robot.

“The drummer essentially becomes a cyborg,” stated Weinberg. “The second drumstick has a mind of its own. It’s interesting to see him playing and improvising with part of his arm that he doesn’t totally control.”

The wearable robot enables Barnes to create truly unique music. It uses artificial intelligence to detect the beat, tempo, and density in his drumming and responds with a beat that complements what it “hears”. It also autonomously listens to the chords played by the guitarist and adjusts its speed based on the chords. 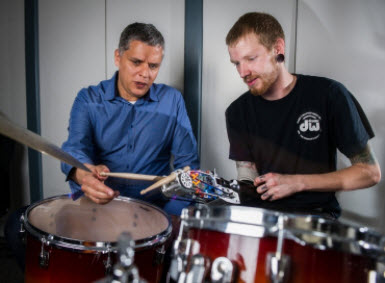 With the device, Barnes can once again control the bounce of the drumstick.

“Now I can flex and send signals to a computer that tightens or loosens the stick and controls the rebound,” said Barnes.

He can also drum at up to 20 hertz with each stick for a combined 40 beats per second. The prosthesis lets him drum at speeds that no human ever had. With the ability to reach 40 hertz, the sound has its own unique color, or timbre.

“I’ll bet a lot of metal drummers might be jealous of what I can do now,” he continued. “Speed is good. Faster is always better.”

The robotic prosthesis gave him a second shot at his dream… To a point.

While the operation of the device was a success, it has limitations that keep it from being a viable solution for everyday use. It is large, heavy, must be plugged in, and needs two computers to run the signal processing algorithms that operate the prosthesis. This made the device far from perfect to take “on the road” for performances.

Barnes has performed internationally with the prosthesis, including at the Kennedy Center in New York and at Robotica in Brisbane, Australia. But due to the complexity of the device, each performance requires an elaborate set-up by the team from Georgia Tech. A portable device would enable him to tour with his own band.

Professor Weinberg is now hoping to redesign the prosthesis so that Barnes can easily perform anywhere. They’ve launched a Kickstarter campaign to help fund the development of a smaller, battery-powered, more portable prosthesis.

With the original device, signal processing is done external to the prosthesis on the computers that sit behind Barnes as he performs. The redesign will continue to work with EMG signals from his arm to control the device, but will use embedded processors so all signal processing will be completed on the device itself.

The team from Georgia Tech used MATLAB and Simulink to model the drumming stroke in the original prosthesis. For the redesign, the team will also add new Simulink models to enable even more expression in the drumming, including multiple bounces and slams.

The team gave three good reasons to support their Kickstarter: