Smart pills will change the way medical professionals treat disease. Researchers are developing tiny capsules that can be placed within a patient to communicate vital information both to and from the body. Their sensors can monitor the body from within, or they could be used for controlled release of medication. 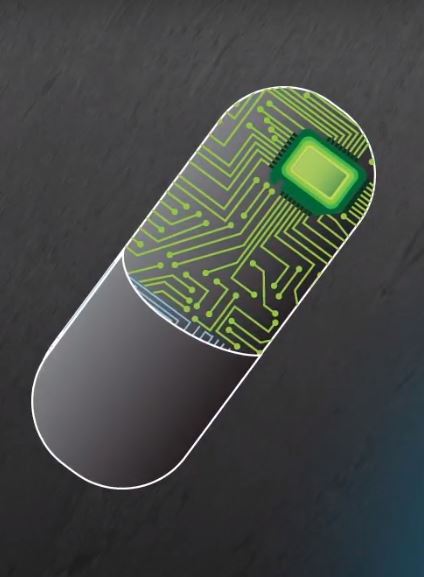 One of the main challenges in developing these tiny medical implants revolves around the trade-off between size and power. The smaller the device, the easier they are to implant. But just like your wearable fitness tracker, the device is only useful for as long as it remains powered. Once their batteries run out, they have to be removed, possibly surgically. Power is needed for the device to be able to communicate outside of the body, but adding batteries adds size.

Massachusetts Institute of Technology (MIT) researchers, working with scientists from Brigham and Women’s Hospital (BWH) in Boston, developed an implantable device the size of a grain of rice that solves the power issue by using radio frequency waves to power-up and communicate with the device. The radio wave-powered prototype device does not use a battery.

With any medical implant, the safety of the power source is critical. Also critical is the depth of the device within the body. An implant at the skin’s surface is easier to charge than one that is centimeters from the surface. While radio waves are a safe form of energy, they tend to quickly weaken as they travel through tissue, making it difficult to communicate with a device implanted deep within the body.

According to Engineering.com, “The principal difficulty in using radio waves is that the waves tend to dissipate as they pass through the body—making them too weak to supply enough power. The researchers have devised a system they call “In Vivo Networking” (IVN) to overcome this tendency.”

The researchers designed a system that focuses the radio waves to both power-up and communicate with miniature sensors implanted or injected in deep tissues. They state, “IVN’s key contribution is a novel beamforming algorithm that can focus its energy toward an implantable device, despite its inability to estimate its channel or its location.”

By using a series of antennas that produce radio waves at different frequencies, the overlapping high points in the signals can overcome the energy threshold and supply enough power to the device. The signals could also transmit instructions to the device.

MIT researchers, working with scientists from BWH, have developed a new way to power and communicate with devices implanted deep within the human body. Image Credit: MIT

To compensate for the large attenuation as the radio waves pass through the human body, the system averages the responses over 1-second intervals. The system then uses a standard RFID decoder in MATLAB and operates on the averaged signal. The researchers were able to successfully communicate with both devices placed near the surface of the skin, and ones as deep as 10 cm.

The effectiveness with and without beamforming was compared, and the researchers demonstrated that their beamforming algorithm achieved 7.6× increase in the range of powering up off-the-shelf RFIDs used in the device. They demonstrated the ability to read a signal at 38 meters. Without the beamforming, the range was limited to 5 meters.

The list of potential uses for such devices is impressive. Ingested devices could be used for controlled medicine delivery to treat diseases such as Malaria or Alzheimer’s. If implanted in the body, the device sensors could monitor health conditions such as glucose levels and wirelessly transmit the data to physicians. When implanted in the brain, the devices could be integrated with neurostimulators to perform deep brain stimulation to treat diseases such as Parkinson’s or Epilepsy.