Anonymous functions are extremely powerful and useful, and I use them all the time whenever I want to create a quick function without writing a MATLAB file. For me, it's one of those features which the more I use, the more I appreciate. Loren has written this post on anonymous functions, and she has discussed the topic in other posts as well.

For those of you who are not familiar with anonymous functions, let me give you a simple example. Tapping into my mechanical engineering background, let's simulate a damped harmonic oscillator by solving the second-order differential equation numerically with ode45.

Then you can solve the system like this (after defining m, k, b, and T):

Simple enough. However, instead of creating a separate function file for odeFcn, I can just create an anonymous function. I can do this because this is a simple, one-statement function.

Now, we can just pass the function handle (to the anonymous function) odeFcnAnon to ode45: 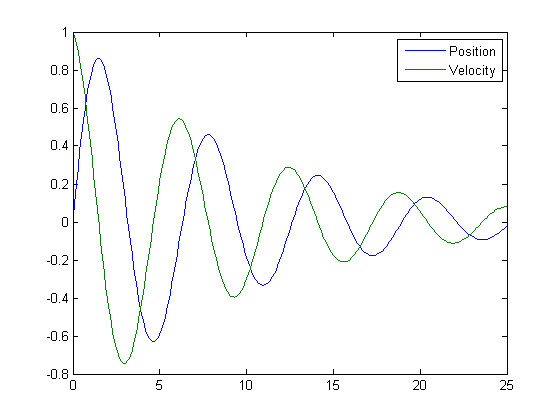 Wasn't that great? I didn't have to write a separate file or a function. I just created the ODE function "on the fly". However, I can't create any function on the fly. An anonymous function can only contain one executable statement, i.e. I cannot have multiple statements or flow control commands like if and for.

Well, that's a bummer! I wanted to make my dampled oscillator behave a little differently by adding an external force at a certain time. To do that, my ODE function would look something like this:

This certainly has more than one statement. How can I possibly do this with an anonymous function? Is my only choice to write a separate function?? ...

Not anymore! My colleague, Tucker, comes to the rescue! He has created a number of functions for flow control commands, as well as other functions that aide in use inside anonymous functions. For example, he has a function iif, which is the functional form of if.

Let's see what our ODE anonymous function would look like with this. 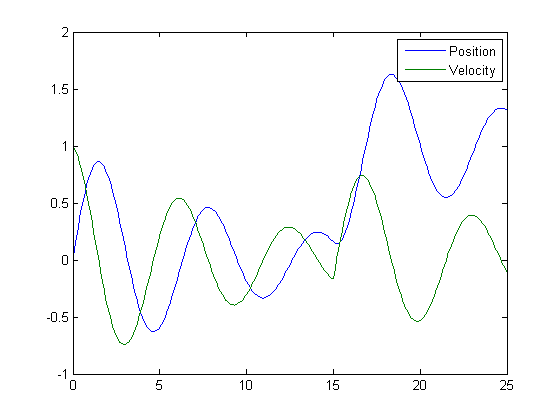 That was cool. I was able to create an anonymous function for my function that contained conditional statements.

There are lots more to Tucker's functions, and he has written a detailed document deriving some of those functions step by step. It's well-written for such a complex topic. I highly recommend reading through it.

For this, Tucker has created output and paren. Let's create an anonymous function that would solve the ODE, extract the position vector, and plot it.

A little confusing? Don't worry. I was confused as well at first. If you read Tucker's documentation, you'll get a better understanding. 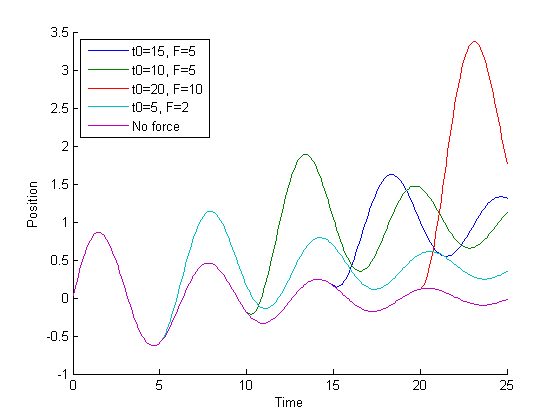 I found Tucker's entry very educational. I learned quite a few techniques I wasn't aware of. If you would like to have some discussion on this topic, feel free to leave comments here or you can visit this post in Loren's blog where Tucker's functions are also highlighted.