Approximately every six months, a new release of MATLAB comes out. Our spring release, R2016a, just came out March 3rd. When you upgrade, your preferences from the previous release are carried over, but the search path is not.

This is where John's tool comes in. Rather than having to look at the pathtool for both releases or manually copying from pathdef.m, John's function exports the non-MathWorks paths from the old release's path definition to be imported into the new one.

This generates a MAT file that contains the path and a new function, import_search_path, to be run in the new release.

If you do want to do this manually, or inspect the results, then use pathtool.

The one thing that this does not take into account is hardware support packages which are release specific. If you installed these in the older release, be sure to remove them explicitly in the new release before installing the corresponding ones for the new release. New ones can be installed from the Add-Ons explorer, accessible from the Home tab. 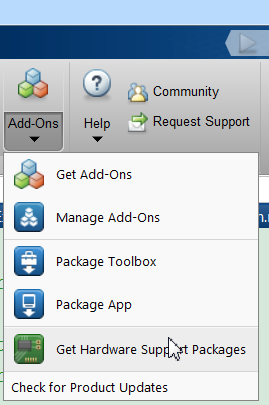 Have you upgraded to R2016a yet? Be sure to browse through the release notes and share your favorite new features!

Give it a try and let us know what you think here or leave a comment for John.