In 2007 I did a series of blog posts on developing MATLAB algorithms for a topological measurement called upslope area, a measurement related to digital elevation models (DEMs). The upslope area of a point (pixel) is the total area on the terrain above that point that drains through it. I formulated the computation of upslope area as a sparse linear system, which let me put the MATLAB backslash operator to good use, and I put my upslope area functions on the File Exchange.

At about the same time, File Exchange contributor Wolfgang Schwanghart was developing a similar approach, which he made available as the TopoToolbox.

I just heard from Wolfgang that a new version of the TopoToolbox is available. It is described in the paper Schwangart and Scherler, TopoToolbox 2 – MATLAB-based software for topographic analysis and modeling in Earth surface sciences, Earth Surface Dynamics, 2014.

The new version features improved memory efficiency and speed, new analysis algorithms, and interactive apps for visual exploration and interaction with DEMs. Here's a figure from the paper: 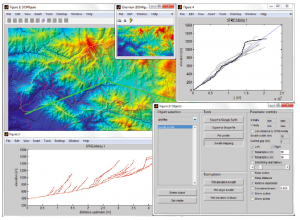 You can find TopoToolbox here. If you are interested in analytical and interactive tools for DEM analysis, you should give it a try.