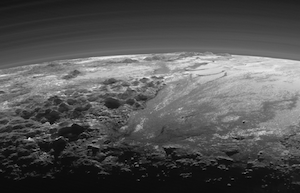 Isn’t that amazing? The image was captured by NASA’s New Horizons spacecraft just 15 minutes after its closest approach to Pluto back in July.

On July 19, I posted a note about how MATLAB and its image processing and optimization tools were used as part of the optical navigation system for New Horizons. Since then we have learned more about how Simulink was used for the flight control system design and implementation.

I have updated the July 19 post with that additional information. Take a look.