Today we’re talking to Guillaume Dablin, a student at the University of Technology of Compiègne, France, about how he used his passion for Engineering to find a solution to overcome his learning obstacles.

You know that kid, the one who always talks about spaceships, planes, or cars; the one who will spend weeks building his new incredible project? Yes, I was the one who talked about jet engines during breakfast. My mom still reminds me about it.
I always had, and still have, this curiosity about what we can accomplish with technology. As a kid, science seemed like magic to me. In all of this, I always looked up to the engineers. They are the ones to create new capabilities and make us all dream bigger. In a way, being able to fly is magical.
Compared to my obsession with engineering and science, subjects in the humanities looked way less interesting to me. Because of my dyslexia and difficulty processing literature, non-STEM studies were frustratingly hard to process. I was swept up by science because mathematics is the language of science and engineering, which naturally made sense to me. I never really had to ask myself which direction to take as pursuing STEM just felt like a logical pursuit.

Why did you choose the Engineering Sciences Olympiad?

To be honest, I didn’t choose the Engineering Sciences Olympiad. It was my engineering science teacher’s idea. I had asked him for help to finish a circuit, and in return, he asked me to represent the school at the Olympiad. While doing that, he was clear that our goal was to represent the school as a participant with no serious expectations of being competitive. The event required entrants to be a team of three people. So, to qualify, I invited two other students to join me: Chloé Tirard and Logan Losio (see: picture of the Olympiad). Chloé helped create the presentation for the Olympiad evaluation, and Logan crafted the speech to give to the panel of judges. For us, it was just supposed to be an opportunity for an enjoyable day off from regular classes and a free buffet meal. Of course, it turned out to be a lot better! We won 1st place in the local competition and advanced to the national event, where we won 2nd place. So, in the end, we doubled the goal, and I had not one but two days off from school and two free buffets :).
All joking aside, the Olympiad gave me the opportunity to meet some great people and get constructive feedback on the project. I had the opportunity to meet an engineer from MathWorks during the Olympiad, who gave me guidance to continue working on my project and present it at an embedded devices conference. This gave me the opportunity to network and learn from industry experts, which is an opportunity not everyone gets. 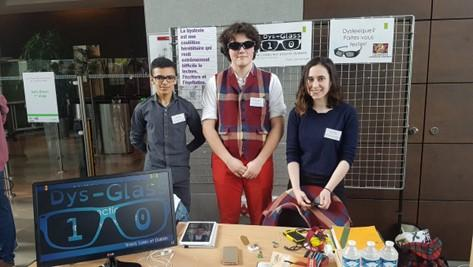 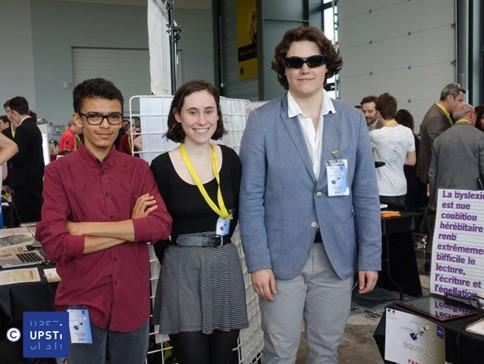 What did you present at the Olympiad and what inspired the idea?

As I’ve mentioned earlier, I have dyslexia. I was diagnosed when I was 10 years old by my teacher, who was herself dyslexic. Dyslexia is a condition where you mix letters, and you have significant difficulty reading. (See image below). It’s something that I must consider every time I read and overcome every time I write. In October 2017, two French researchers (Albert le Floch and Guy Ropars) published a paper about dyslexia in the Journal of the Royal Society. They presented the idea that dyslexia is more an ocular malformation than a brain impairment. That idea inspired me to try to build a pair of glasses that would counteract the ocular malformation described in the paper. Thankfully, I could personally test the efficacy of the glasses and know when they were finished. After successfully testing them myself along with my friends with dyslexia, and some of my teachers with dyslexia, I had my prototype glasses finished. This pair of glasses is the project that I presented at the Olympiad.

What was your design process to build the prototype?

The technical specifications that I needed were very specific and complicated by the limited availability of the components to match them. I looked for the smallest components possible to be able to integrate them into the frame of the glasses. My goals were to make it both functional and easily wearable. I didn’t work on the design at first. At first, I looked at what was needed to physically correct this ocular malformation. Then I evaluated what electronic components I could use to create this effect and then what those components needed to work effectively. Thankfully, I had the opportunity to use Simulink and Simscape to simulate each component. Then I used it to test and optimize the circuit within the software. It was easy enough for me to use on my own and made me able to have a working circuit in no time. Then I spent time and money to build the prototype. Testing and simulation were a great start for a 17-year-old high school student, as I was able to get my prototype successfully working in two months. 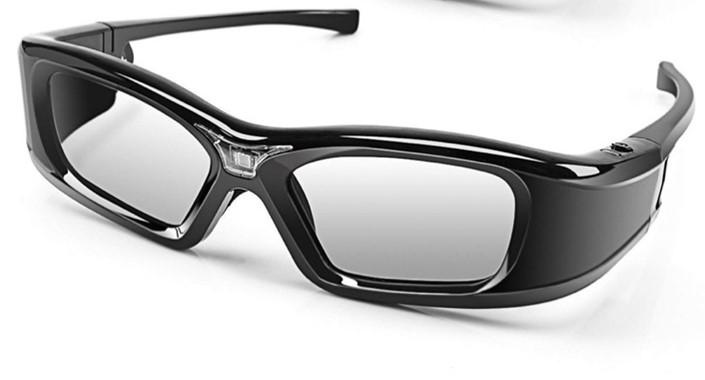 How was the prototype received at the Olympiad?

During the Olympiad, I observed two different types of reactions. In the first level of competition, people seemed interested and optimistic. During the provincial round, there was someone in the audience with dyslexia who was able to test the glasses and testify to everyone that they really worked. As it turned out, that person’s testimony was a game-changer! In the national competition, the experience was different. We finished 2ndbecause one of the groups of judges thought it was a scam and gave us the lowest grade possible. We still managed to finish 2nd out of the 40 other teams. These two examples summarize the range of reactions of the people. About two-thirds were intrigued and optimistic about the project, and one-third were skeptical.

How has the experience of the Olympiad been beneficial during your subsequent school years?

To succeed in the Olympiad, you need to be able to communicate effectively. Participants need to master skills like presenting a project to people that don’t know a thing about it, being able to summarize it briefly but also being able to provide detailed answers to questions. Those skills are also required in high school, university, and will be helpful in my professional career. But mostly what it gave me was a real sense of purpose, a sense of “why am I doing this?” In high school, I felt like I was studying just because I was supposed to. That may be enough for some people, but it really wasn’t for me. I need goals to achieve, and then I am very self-motivated. The Olympiad provided an opportunity to work on a concrete project but also to compete against others. That gave me a very motivating goal. It changed the “what or why am I doing this?” to “how am I going to achieve this?” I have carried this drive forward into my subsequent education. The success that I had at the Olympiad was also a boost to my confidence. When I am frustrated, I remind myself that I have overcome obstacles before to solve problems, and that helps me to stay motivated.

Did you continue to work on the prototype after the Olympiad?

Absolutely, in the next post, you will be able to follow my adventure, how the prototype travelled across the ocean, from France to Canada, to the little town of Assiniboia, Saskatchewan. There, the tests confirmed that the glasses work regardless of the language.

Thanks for your time!
If you want to contact me, you can at contact@d-opto.fr