The ACM Special Interest Group on Programming Languages, SIGPLAN, expects to hold the fourth in a series of conferences on the History of Programming Languages in 2020, see HOPL-IV. The first drafts of papers are to be submitted by August, 2018. That long lead time gives me the opportunity to write a detailed history of MATLAB. I plan to write the paper in sections, which I'll post in this blog as they are available. This is the third such installment.

LINPACK and EISPACK are Fortran subroutine packages for matrix computation developed in the 1970's. They are a follow-up to the Algol 60 procedures that I described in my blog post about the Wilkinson and Reinsch Handbook. They led to the first version of MATLAB. This post is about LINPACK. My previous post was about EISPACK. 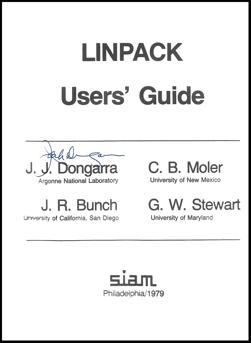 Cart Before the Horse

Logically a package of subroutines for solving linear equations should come before a package for computing matrix eigenvalues. The tasks addressed and the algorithms involved are mathematically simpler. But chronologically EISPACK came before LINPACK. Actually, the first section of the Handbook is about linear equations, but we pretty much skipped over that section when we did EISPACK. The eigenvalue algorithms were new and we felt it was important to make Fortran translations widely available.

In 1975, as EISPACK was nearing completion, we proposed to the NSF another research project investigating methods for the development of mathematical software. A byproduct would be the software itself.

The four principal investigators, and eventual authors of the Users' Guide, were

The project was centered at Argonne. The three of us at universities worked at our home institutions during the academic year and we all got together at Argonne in the summer. Dongarra and I had previously worked on EISPACK.

Fortran subroutine names at the time were limited to six characters. We adopted a naming convention with five letter names of the form TXXYY. The first letter, T, indicates the matrix data type. Standard Fortran provides three such types and, although not standard, many systems provide a fourth type, double precision complex, COMPLEX*16. Unlike EISPACK which follows Algol and has separate arrays for the real and imaginary parts of a complex matrix, LINPACK takes full advantage of Fortran complex. The first letter can be

The next two letters, XX, indicate the form of the matrix or its decomposition. (A packed array is the upper half of a symmetric matrix stored with one linear subscript.)

The final two letters, YY, indicate the computation to be done.

Fortran at the time was notorious for unstructured, unreadable, "spaghetti" code. We adopted a disciplined programming style and expected people as well as machines to read the codes. The scope of loops and if-then-else constructions were carefully shown by indenting. Go-to's and statement numbers were used only to exit blocks and properly handle possibly empty loops.

In fact, we, the authors, did not actually write the final programs, TAMPR did. TAMPR was a powerful software analysis tool developed by Jim Boyle and Ken Dritz at Argonne. It manipulates and formats Fortran programs to clarify their structure. It also generates the four data type variants of the programs. So our source code was the Z versions and the S, D, and C versions, as well as "clean" Z versions, were producing by TAMPR.

This wasn't just a text processing task. For example, in ZPOFA, the Cholesky factorization of a positive definite complex Hermitian matrix, the test for a real, positive diagonal is

In the real version DPOFA there is no imaginary part, so this becomes simply

All of the inner loops are done by calls to the BLAS, the Basic Linear Algebra Subprograms, developed concurrently by Chuck Lawson and colleagues. On systems that did not have optimizing Fortran compilers, the BLAS could be implemented efficiently in machine language. On vector machines, like the CRAY-1, the loop is a single vector instruction.

The two most important BLAS are the inner product of two vectors, DDOT, and vector plus scalar times vector, DAXPY. All of the algorithms are column oriented to conform to Fortran storage of two-dimensional arrays and thereby provide locality of memory access.

The programs avoid all machine dependent quantities. There is no need for anything like the EISPACK parameter MACHEP. Only one of the algorithms, the SVD, is iterative and involves a convergence test. Convergence is detected as a special case of a negligible subdiagonal element. Here is the code for checking if the subdiagonal element e(l) is negligible compared to the two nearby diagonal elements s(l) and s(l+1). I have included enough of the code to show how TAMPR displays structure by indentation and loop exits by comments with an initial c.

No commercial book publisher would publish the LINPACK Users' Guide. It did not fit into their established categories; it was neither a textbook nor a research monograph and was neither mathematics nor computer science.

Only one nonprofit publisher, SIAM, was interested. I vividly remember sitting on a dock in Lake Mendota at the University of Wisconsin-Madison during a SIAM annual meeting, talking to SIAM's Executive Director Ed Block, and deciding that SIAM would take a chance. The Guide has turned out to be one of SIAM's all-time best sellers.

A few years later, in 1981, Beresford Parlett reviewed the publication in SIAM Review. He wrote

It may seem strange that SIAM should publish and review a users' guide for a set of Fortran programs. Yet history will show that SIAM is thereby helping to foster a new aspect of technology which currently rejoices in a name mathematical software. There is as yet no satisfying characterization of this activity, but it certainly concerns the strong effect that a computer system has on the efficiency of a program.

Today, LINPACK is better known as a benchmark than as a subroutine library. I wrote a blog post about the LINPACK Benchmark in 2013.

In a sense, the LINPACK and EISPACK projects were failures. We had proposed research projects to the NSF to "explore the methodology, costs, and resources required to produce, test, and disseminate high-quality mathematical software." We never wrote a report or paper addressing those objectives. We only produced software