When the Array Editor was introduced back in MATLAB 5.0, it provided static snapshots of MATLAB double arrays.  It has evolved a lot since then, to provide dynamic editors for…

A lot of new functionality was added in R2008a, including

Because of all of these changes since Version 5, we felt that it was time to rename the Array Editor.  It’s now called the “Variable Editor” to reflect its enhanced capabilities.

Let’s take a look at some of the changes.  Create a variable and open it in the Variable Editor:

>> openvar x % Or go to the Workspace and double-click on x. 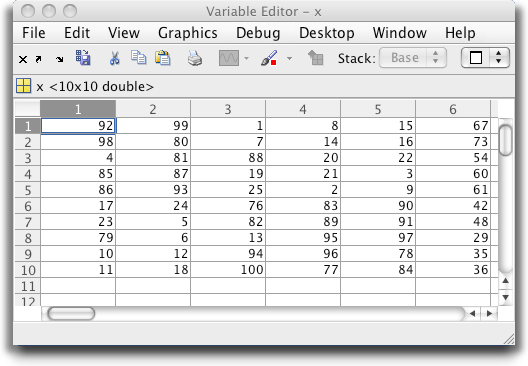 Here we see the Variable Editor with a new information bar bar located just below the toolbar.  It shows the name, size, and class of the current variable, as well as the same icon (based on data type) that’s shown in the Workspace.

We also see the new data brushing toolbar button.  Data brushing is a topic unto itself, worthy of a future posting (stay tuned – if you can’t wait to try it, checkout the documentation).

We’ve enhanced structure editing to leverage a lot of the features that have been added to the Workspace in recent years.  To see this, let’s create a structure with some interesting data.

We’ve also added support for MATLAB class system objects.  Now, the public properties of objects are shown in the same way as the fields of structures.

Let’s examine an instance of the memmapfile object: 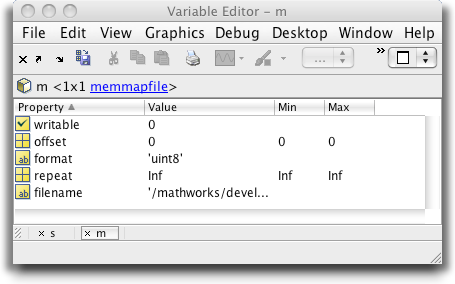 Notice that the public properties of the object appear in the Variable Editor.

Normally, only the public properties of an object are visible.  But if you’re debugging an object, you’ll need to be able to get to the protected or private properties, too.  The Variable Editor supports that.  Let’s set a breakpoint in one of the methods of memmapfile, and watch what happens.

Set a breakpoint on the set.writable method (in R2008a, that’s line 132) by right-clicking on that line and selecting “Set/Clear Breakpoint.”

Now, do something to hit that breakpoint:

The debugger stops on that line of code.  In the Editor, you can see that the object being debugged is called “obj”.  To see the contents, 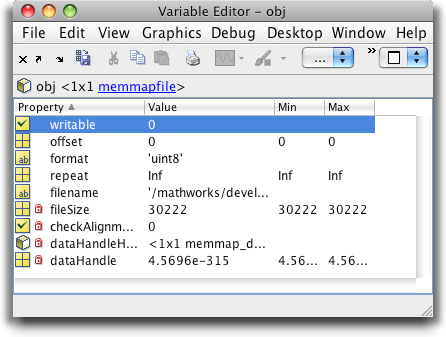 The Variable Editor opens, showing all of the properties, both public and private.  The ones that end users normally have access to are shown without any lock icons next to them.  In contrast, the private properties have little red locks next to them, to show you that they’re normally inaccessible.  You can only see them because you’re debugging one of the object’s methods.