Ever since Class Objects were first introduced in R2008a, we’ve improved or added to their functionality. In R2010b, we have official support for Enumerations. Enumerations are type-safe collections of discrete, named values. Classic textbook examples are the days of the week (Monday, Tuesday, etc) and months (January, February, etc), because they represent a simple, complete set.

How does the Desktop support enumerations? Because enumerations are class objects, they are supported out-of-the-box with features like M-Lint, file preview, and tab completion. One new enumeration-specific feature is the Enumeration Template that can be reached from File -> New -> Enumeration. 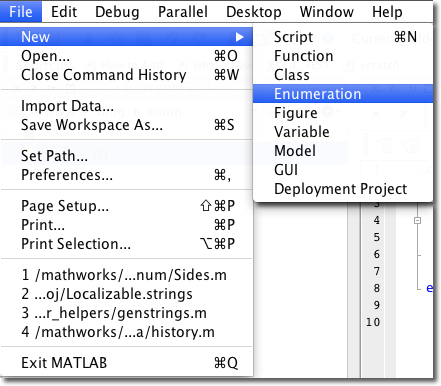