OK, it didn’t really save my life. But Trendy’s users have helped me understand MATLAB coding and plotting… and to some, that’s right up there with having their lives saved.

I’m Rob Nickerson, a Senior Usability Specialist at MathWorks, and I worked on web applications on mathworks.com like the webstore, training, and careers areas. However, Trendy is a slightly different animal; users of Trendy write small snippets of MATLAB code to gather data, and then Trendy automatically gathers and plots that data indefinitely.  When I was approached to work on the first release of Trendy, I was excited (and intimidated, to be honest) by the challenge of working on a web application so closely tied to MATLAB. Did I need to be a MATLAB coding expert? Did I need to know how to use hold on/hold off, or how to write complex HTML scraping code in MATLAB?

From the world of the obscure: My plot for the sales rank for "Overboard" on Amazon after being mentioned on the Oscars.

Thankfully, the answer to those questions was “not really”. The important part of my job is to not be an expert user myself, but rather to identify who the real users are, and what it is they want to do. In the past two years we’ve recruited MATLAB Central users like you to come to MathWorks and evaluate Trendy using paper mockups, development builds, and production releases. The feedback from those usability sessions directly influences the features and functionality we incorporate into Trendy, whether it’s during a major release or minor tune-up releases.  For example, user testing told us that being able to collect a data point once a day was limiting, and you gave us examples like “I want to collect my fantasy football stats weekly”, or “I want to track a stock price over the course of a day”. With that feedback in mind, we now allow data samples to occur hourly, daily, weekly, or even monthly.

This process of gathering and distilling user feedback has not only educated me about our users and their needs, but also about MATLAB and plotting in general. We now have lots of great content to learn from, as our users have made some pretty incredible things in the short time it’s been available, constantly changing the answer to the question “What can I use Trendy for?”:

Since the nature of Trendy is to create and share your work with the world, it’s easy for someone just starting with MATLAB (me, for example) to reverse-engineer the work of someone who’s been doing this for a while (Aurelien Queffurust or Semin Ibisevic, for example) and create my own trends. For example, I have a plot comparing Apple and Google stock prices; the plot was kind of boring and not terribly informative until a Trendy user suggested I “normalize the trend lines to make things more interesting”. To do that, I had to figure out what normalizing the plot meant… and to do THAT, I found someone else’s plot that had code for normalizing trend lines. After borrowing that code, I was in business. 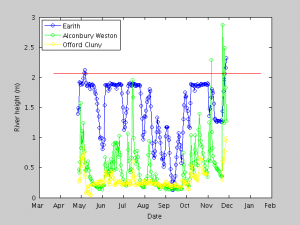 From the world of the userful: Trendy user Edric Ellis plots local river heights, to determine when bridges are rendered unpassable.

Trendy is teaching me more about MATLAB and plotting than I ever would have imagined, and I have users like you to thank for it. If you have questions or comments about Trendy, please let us know… and thanks again for saving my life.