One of the nice things about showing up early is getting things named after you.

See that bouncy gazelle over there? Let’s name it after the intrepid Joseph Thomson. That guy’s been back and forth across Kenya twenty times by now. And that mountain? I think I’ll name it after my ship’s naturalist, Charles Darwin. After all, the kid just turned 25. He deserves a mountain!

It works the same way in linear algebra. The pioneers got things named after them. Only instead of mountains, they were matrices. Of course, matrices don’t loom over the landscape in quite the same way as mountains. They’re purpose-built artifacts, mostly notable for the trouble they cause. Many of them were conjured into existence precisely because they were problematic for the solving methods of the time. They caused numerical indigestion. So you might say that matrix names are rather more like disease names than mountain names.

David Hilbert, as one example, described a matrix that will give you heartburn when you try to invert it. After a while, people started calling it Hilbert’s matrix. It’s less of a majestic monument and more of a numerical chicken bone. But still name worthy! In fact, it’s the first matrix that Cleve Moler ever knew by name (“Pleased to meet you Mr. Matrix. Or can I call you Hilb?”).

Many named matrices have their own functions and live in MATLAB’s main name space. You can find the aforementioned hilb (and his upside-down friend, invhilb). J.H. Wilkinson has his own matrix with a clutch of dangerously close eigenvalues. And then there’s Rosser’s test matrix with a different band of naughty eigenvalues.

Of course, not all special named matrices are pathological. We can find hadamard (from Jacques Hadamard), pascal (from Blaise Pascal’s eponymous Triangle), and vander, after the rather extravagantly named Alexandre-Théophile Vandermonde. And we must not forget the brilliant George Eigen, inventor of the eigenvalue (fun fact: Eigen’s college roommate was Seymour Singular-Value).

I’m kidding! Eigen and Singular-Value were not actually college roommates. Principally because neither of them existed.

But now let’s suppose you were strolling around in MATLAB’s lobby and you wanted to visit a gallery of still more curious and pathological matrices. Where would you go? Why, to the gallery function, of course!

The gallery function is full of strange and beautiful matrices, many of them named after mathematicians. Each one tells a different story from the history of linear algebra. Personal favorite: the dramadah matrix is the hadamard matrix spelled backward. I recommend that you read what Cleve had to say about the gallery matrices last month: Bohemian Matrices in the MATLAB Gallery.

The main thing I want to mention here before I finish up is that one of these matrices is the moler matrix, named after our very own chief scientist, Cleve Moler. As Cleve tells the story, he had no idea where the matrix came from or why it was associated with his name. So Cleve asked Nick Higham, who was the one who put it into gallery. It turns out the original reference is from a book called “Compact Numerical Methods for Computers” by J.C. Nash. On page 153, just below the description of Fred Ris’s Ding Dong matrix, we find this. 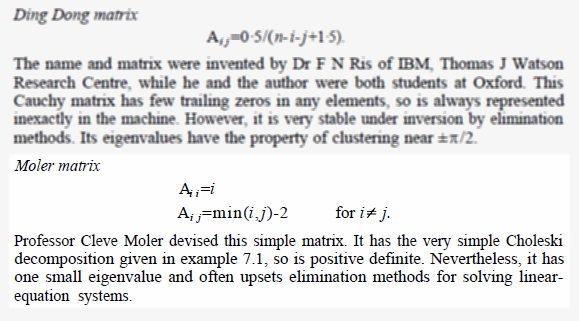 So there you have it. Apparently Ris carried this example to Nash, who credited it to Cleve, even though Cleve doesn’t remember the interaction. And what does the moler matrix look like? Here it is. It’s pretty! 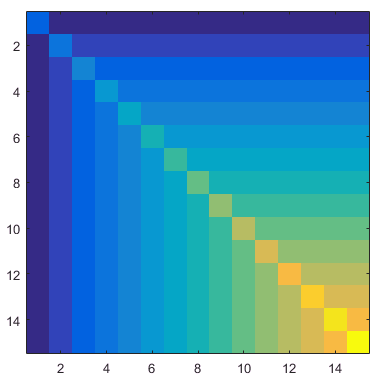 Clearly, one doesn’t always get to choose the things that bear one’s name. Cleve says there IS a matrix that should have his name on it, but sadly it’s now associated with someone else. Read about the parter matrix (and its astonishing relationship to pi) here: Surprising SVD, Square Waves, and Pi.

What would you rather have named after you, a matrix or a gazelle?