Imagine traveling twelve years in pursuit of a comet that is streaking along at 24,600 miles per hour only to crash into the comet. Twelve years. 4.9 billion miles. Untold hours of science and engineering manpower invested in this project and it’s going to crash?

Yet that is exactly what’s about to happen to the Rosetta comet chaser. That is, as long as everything goes according to plan. And BBC will be covering it live.

Tomorrow, the twelve-year-long European Space Agency (ESA) mission’s probe is going to intentionally crash land, albeit slowly, into the comet it has been trailing.

ESA’s Rosetta probe was launched on 2 March 2004 in order to rendezvous with comet 67P. Rosetta’s prime objective is to help understand the origin and evolution of the Solar System.  According to ESA, “The comet’s composition reflects the composition of the pre-solar nebula out of which the Sun and the planets of the Solar System formed, more than 4.6 billion years ago. Therefore, an in-depth analysis of comet 67P by Rosetta and its lander will provide essential information to understand how the Solar System formed.” 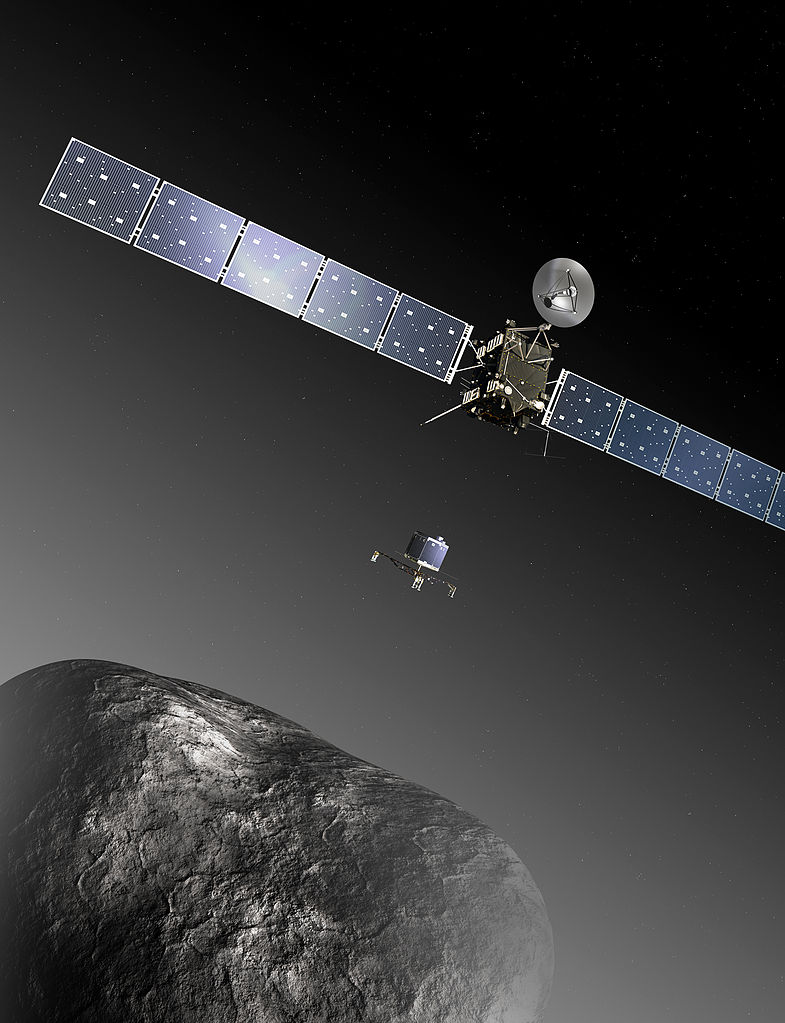 The probe required three earth fly-by’s to gain momentum through gravity assists. In ten years, Rosetta traveled over 6.4 billion kilometers before its rendezvous with 67P.

Rosetta then dispatched the Philae lander, a small robotic probe it had carried to the comet, to the surface. Philae collected data from the comet’s surface and sent it to Rosetta, still in orbit around the comet. Rosetta then relayed the information back to scientists on Earth.

Corrections needed along the way

According to ESA, “Ensuring that the spacecraft survives the hazards of travelling through deep space for more than ten years is therefore one of the great challenges of the Rosetta mission.”

After Rosetta awoke from its planned 3-year hibernation designed to conserve power, the team discovered a loss of efficiency in one of the thrusters. They were able to retune the controller to better cope with encountered performance. For this, they used the structured MATLAB and the H-infinity in Robust Control Toolbox, as detailed in this paper, “Systematic design methods of robust and structured controllers for satellites: Application to the refinement of Rosetta’s orbit controller.”

The redesigned 8-state controllers were uploaded to Rosetta. They performed a test maneuver and were able to confirm that better overall performance was achieved. The video below shows the Rosetta orbit path as it deployed the Philae lander in 2014.

The Philae landed in 2014. During the landing, Philae’s harpoon failed and the ice screws in the lander’s feet didn’t attach to the comet surface. It bounced three times during the landing, coming to rest in an area that only received 1.3 hours of sunlight per day, instead of the expected 6.5 hours. Scientists were unable to find the lander on the surface, and Philae was only able to send data back to Rosetta for a short while.

Rosetta’s mission was intended to end in December 2015, after the comet reached its closest point to the Sun in August 2015 and started to head back towards the outer Solar System on its 6-year orbit. But the Rosetta orbiter exceeded expectations and was able to continue to orbit 67P.

Less than one month before the extended mission’s end, Rosetta’s cameras finally spotted Philae wedged into a dark crack on the comet’s surface. Two of its legs were sticking up in the air. Finding Philae after all that time “was like drinking a bottle of adrenaline,” Laurence O’Rourke, a lander systems engineer at ESA said. “I couldn’t sleep for the whole night.”

Today, Rosetta is sending back its final transmissions. The comet chase will crash into the comet tomorrow, 30 September 2016. The ESA team has said that the time leading up to this will be challenging from a controls perspective.

The trajectory of the 13-hour freefall was selected to maximize the sunlight that reaches Rosetta’s solar panels during the descent. Rosetta will not “see” Philae during the descent, but should send back some amazing images of the surface of the comet. It could come as close as 15 meters from the surface during the final fly-by. This will provide an image resolution of millimeters per pixel and provide unprecedented detail of the surface.

What we’ve learned from Rosetta so far

Scientists have yet to analyze all of the data Rosetta has sent back to  Earth, and they will be carefully examining the data collected during tomorrow’s crash landing. The data by the orbiter’s suite of instruments has already led to the publication of hundreds of scientific papers. Some finding include: