Today I'd like to introduce you to a guest blogger, Dave Bergstein, who is a MATLAB Product Manager here at MathWorks. Today, Dave will be discussing the new MATLAB execution engine.

In R2015b we changed the way all MATLAB code is executed with the introduction of the new MATLAB execution engine. The improved architecture runs MATLAB programs faster and provides a platform for future enhancements. And these benefits come without requiring changes to your code.

See what some customers are saying about the new execution engine:

"I work with a wide variety of clients and spend time helping many of them speed up their existing MATLAB code. I was very excited then to see how much the new execution engine helps performance. One client reported that a key performance-critical process now runs twice as fast in R2015b, providing a significant positive impact on their daily operations." Yair Altman
MATLAB expert and author of the book Accelerating MATLAB Performanc (CRC Press)

What It Means For You: Better Performance, Quality, and Extensibility

The new execution engine was designed with performance in mind from the beginning. The following are some specific language areas with the most significant improvements:

A number of factors account for the speedup in these areas and others, including improved just-in-time (JIT) compilation of MATLAB code. Redesigning the execution engine was also a time to revisit and resolve old language imperfections and bugs, improving quality. And it was an opportunity to design the engine for extensibility, facilitating future enhancements and new features to come.

What is JIT Compilation?

The new MATLAB execution engine can JIT compile all MATLAB code and this is an important factor in how it executes code faster. Programming languages like C++ are so-called compiled languages. C++ code goes through a compile step initiated by the author. This compile step generates machine code which executes directly on the target hardware. And compilers can often optimize the generated code to help applications execute faster.

Interpreted languages are executed command-by-command by an interpreter program and don't require an explicit compile step. For engineers and scientists working interactively with their data, it can be very helpful to execute commands this way, altering the sequence of commands as they work. Although this style of execution can be very effective for exploring ideas, it can be slow when executing blocks of code.

MATLAB provides the best of both worlds by compiling MATLAB code on-the-fly, or just-in-time. MATLAB code is compiled whether it be in classes, functions, scripts, or simply at the command line. There is no explicit compile step for the user to initiate and MATLAB code can be executed in blocks as small as one line at a time. The MATLAB JIT compiler generates native machine level code that is optimized for the MATLAB code being executed and for the specific hardware platform.

The function test1 calls the function foo1 in a for-loop which performs a straightforward computation using the looping variable ii. The function foo1 first checks its input value and can issue an error using the error command if the input is out of range. The error confidition won't occur in this example, but such input checking is a common practice that helps when functions get reused.

I recorded the following times for Test1 using the timeit command on my laptop [1]:

The new execution engine is more than 40 times faster executing this example!

Next, consider what happens when we make a slight change to the test. Test2 is the same as Test1 except that it calls foo2 which issues the possible error through another function.

I recorded the following times for Test2 using the timeit command:

With R2015a Test2 takes twice as long to run as Test1 did (3.8667 seconds vs 1.7887 seconds). The reason for the slowdown is that the added code complexity limits the ability of the previous JIT compiler to compile the code. With R2015b the execution time between Test1 and Test2 is nearly the same, demonstrating the ability of the new execution engine to JIT compile all MATLAB code. The result is that Test2 executes nearly 90 times faster with the new execution engine in R2015b.

MATLAB spends some amount of time compiling the code. The time to compile is typically small relative to the time to execute the code. And when code is run repeatedly in a MATLAB session without being cleared, you get the greatest benefit since the code only needs to be compiled once. Examples of running code repeatedly are for-loops or rerunning unmodified MATLAB files. Knowing this, consider the following ways to improve the performance of your code: 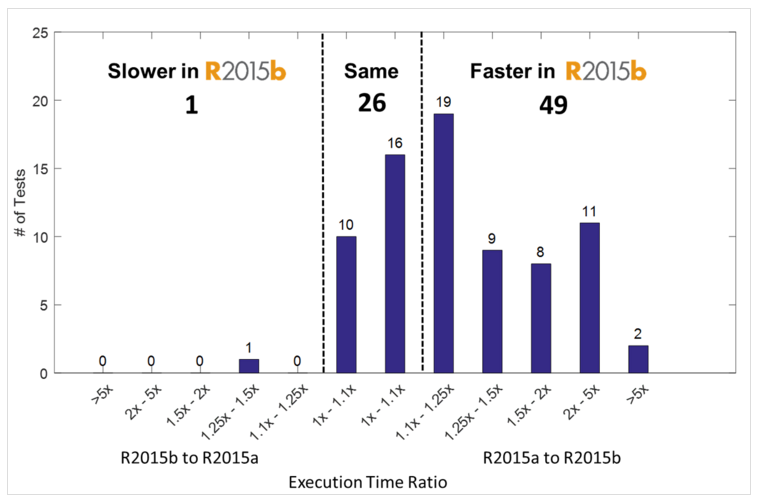 How Fast is Your Code?