If you pile up enough of them, small errors can turn into big problems. For instance: how long is a year? More specifically, if you ignored the leap day every four years, how long would it take to notice something was wrong?

Historically we have defined the day as the amount of time from noon to noon. This is relatively easy to measure. We could measure the year this same way: the amount of time from, say, solstice to solstice. But we don't do this. Instead we try to compute it by counting the number of days. This causes all kinds of problems.

We wish that the number of days in a year was a nice round number, but it isn't, and there's no reason to expect it to be. It's as if you were to pick two numbers at random and expect one to cleanly divide the other. Over the centuries, we've managed to "fix up" the calendar of days with leap days so it fits a solar year. Lunar calendars are even more of a mess and require great exertions to keep on track with a solar year. The Hebrew calendar is lunar, and it periodically inserts extra months to make up the shortfall. The Islamic calendar is also lunar, but it does not attempt to stay synchronized with the solar year. Thus the month of Ramadan, for example, moves slowly through the seasons with each passing year, sometimes occurring in the summer and sometimes in the winter.

So how many days are in a year? It's not exactly 365, but it's close. Does the difference matter? Let's investigate. The length of a seasonal year is 365.24219878 days (more or less). Consider a primitive calendar exactly 365 days long with no leap years. Such a calendar was actually used by the ancient Egyptians. 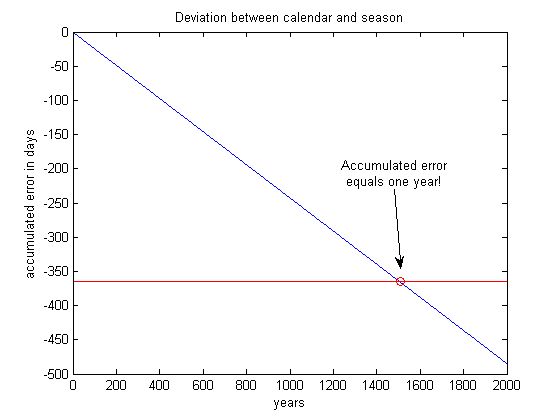 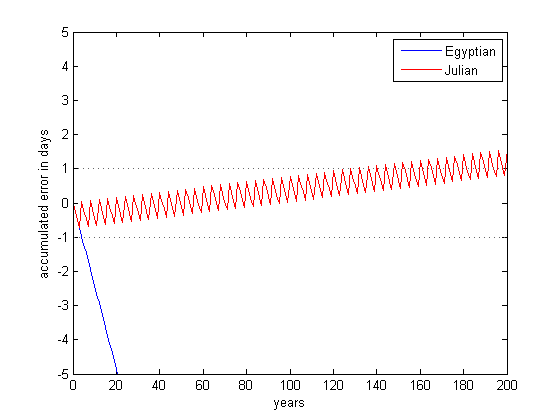 Adding a leap year day every four years helps, but as you can see there is still some significant drift. After 200 years we're already a day out of synch, but in the other direction. We've made the calendar year longer than it ought to be.

Zoom in and you can see that after 600 years or so we have drifted by a day. 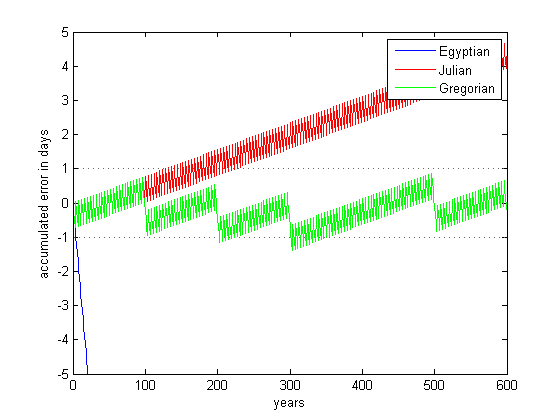 The modern calendar does one final tweak on this: if the year is divisible by 4000, leave out the leap-day despite the Gregorian recommendation above. 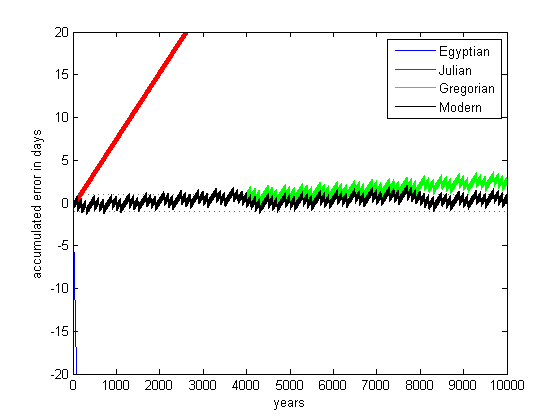 To account for variation beyond this, we insert leap seconds, so we should be in good shape for a long time to come.