This week's blog is motivated by a common question on MATLAB Central. Consider the following problem:

How can you generate a curve fit that best describes the relationship between X and Y? This question traditionally shows up in in two different guises:

In this week's blog, I'm going to show you a better way to solve this same problem how to use a combination of localized regression and cross validation.

Generate some data to work with

To use a more visual approach, suppose you had the following set of data points: 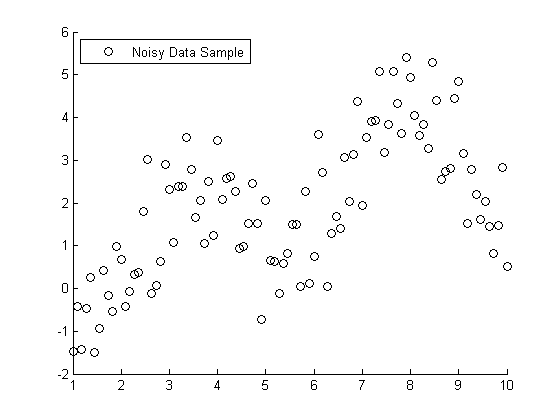 If you knew that this data was generated with a second order Fourier series, you use nonlinear regression to model Y = f(X). 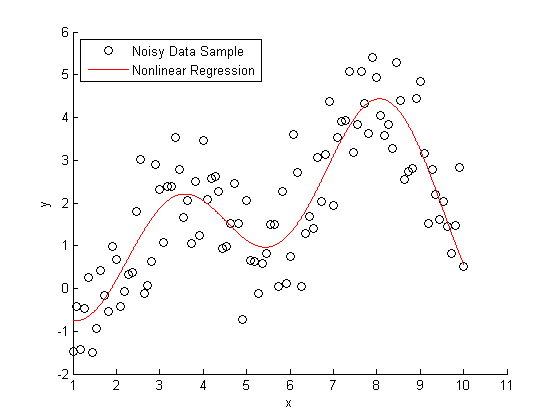 All very nice and easy... We were able to specify a regression model and plot our curve using a couple lines of code. The coefficients that were estimated by our regression model are a close match to the ones that we originally specified.

Here's the rub: we cheated. When we created our regression model, we specified that the true relationship between X and Y should be modeled using a second order Fourier series. What if this information wasn't available to us?

This next piece of code is a bit more complicated, however, it will solve the same problem using nothing but the raw data and some CPU cycles.

We're going to use a smoothing algorithm called LOWESS (Localized Scatter Plot Smoothing) to generate our curve fit. The accuracy of a LOWESS fit depends on specifying the "right" value for the smoothing parameter. We're going generate 99 different LOWESS models, using smoothing parameters between zero and one, and see which value generates the most accurate model.

This type of brute force technique often runs into problems with "overfitting". The LOWESS curve that minimizes the "sum of the squared errors" fits both the signal and the noise component of the data set.

mylowess is a function that I wrote that estimates values for a lowess smooth. I've included a copy of mylowess.m for you to use.

Evaluate the accuracy of our LOWESS fit

Next, let's create a plot that shows 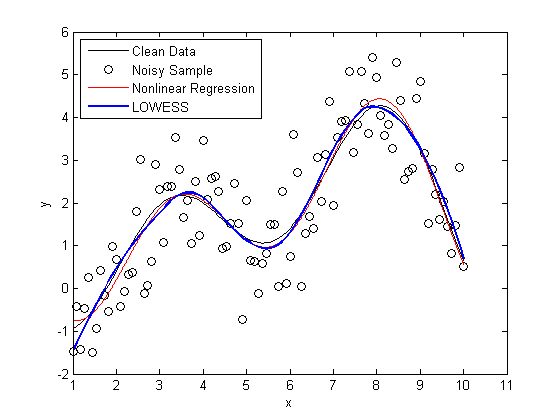 As you can see, the LOWESS curve is doing a great job capturing the dynamics of the system. We were able to generate a LOWESS fit that is almost as accurate as the nonlinear regression without the need to specify that this system should be modeled as a second order Fourier series.

Here's a bonus for those you you who stuck around to the end. This next bit of code generates confidence intervals for the LOWESS fit using a "paired bootstrap". 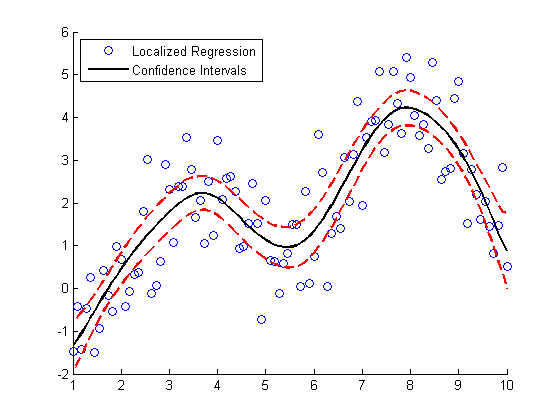 Can anyone provide a good intuitive explanation how the bootstrap works? For extra credit: