Background on The Question (Personal Narrative)

I started working at MathWorks in late November, 2011. When Sven asked this question a few weeks later, my wife had not yet moved to Massachusetts. It was December in my temporary not-so-energy efficient house so I was saving costs by keeping the house at 50F (10C) and staying late at work.

This question came in at the end of the work day and immediately caught my attention. I spent the next five hours coming up with an answer.

A year or so later, Seth, our Optimization Toolbox Product Marketing Manager, was showcasing some new technology to the engineers where he debuted the Sudoku Solver that Alan wrote about a few weeks ago and the solution to the Traveling Sales Man problem. This actually interested me more since it brought back memories of Transportation Engineering classes in college. This new technology was still a few releases away from being ready but the potential was already obvious. I sent Seth this question to see if it would be a good candidate and he replied with the optimal answer in about an hour.

When R2014a was release earlier this Month, he agreed to post his answer.

Background on the Question (Technical)

So what is the question? The goal of the question is to optimally group some elements into bins to minimize both the number of bins and the size of the biggest bin. Each bin has a maximum size and the elements can not be rearranged from their original order. This is a type of optimization problem known as a knapsack problem (thanks Walter!).

The first answer to roll in came from Elige Grant. He posted a way to do this with brute force. For small problems, this will be quick enough and the optimal solution will obviously be found and guaranteed.

As the problem size grows, however, brute force starts to become cumbersome in terms of computational resources. My solution was to use the only solver at the time that we had for mixed integer optimization, ga, the genetic algorithm solver. This solver has an option, 'IntCon', to constrain variables to integers, a requirement. I'd also only been able to have access to the Global Optimization Toolbox for the last few weeks, so this was a chance to play with something new. It did work too (!), for small problems. Once again, as the problem size grew, this approach fell apart and there's no way to prove optimality (or lack thereof) from it.

Let's examine how it's done: 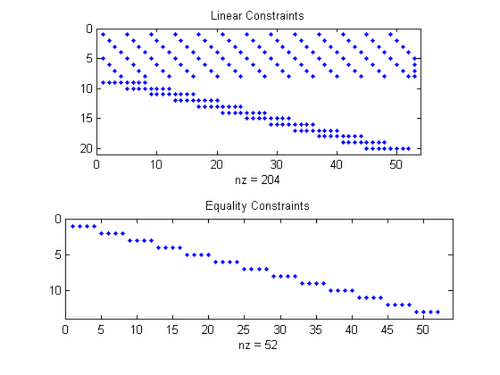 Since absolutegap is 0, this is the best solution.

Do you have a problem that could be solved with mixed-integer linear programming, or one that you're not sure about and would like our thoughts on? Let us know about it here.

Also, if you liked this post, and you're still reading at this point (which probably biases the data): Would you like me to write another out of model Pick Of The Week post that highlights an intlinprog practical example?