It is not every day that I attend a speech by political leaders of the Commonwealth of Massachusetts. 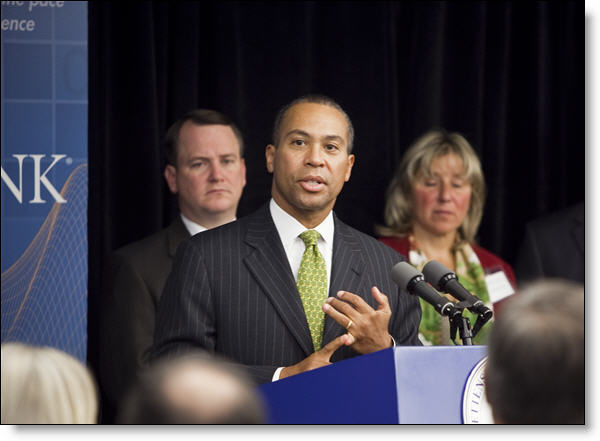 Governor Patrick speeking about the value of science technology engineering and math (STEM) education during his visit to The MathWorks on October 14, 2009. Photo by Jeff Newcum

On October 14th, 2009 Massachusetts Governor Deval Patrick signed an executive order to establish the Science Technology Engineering and Math (STEM) Advisory Council.  The MathWorks hosted the gathering of local political leaders.  MathWorks CEO Jack Little introduced the Lieutenant Governor Timothy Murray and the Governor Deval Patrick to a room filled with MathWorkers.  I could describe all the formalities and go into what this means for STEM education in Massachusetts, but other media sources covered those topics (like EDN, Mass High Tech< and the Governors official website).  Instead I would like to focus on some of the tangents to the main event. 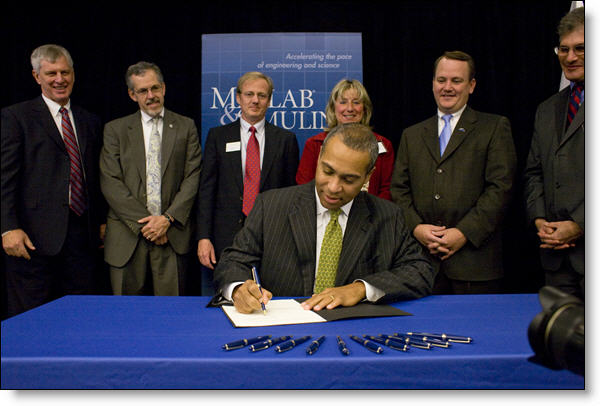 Talking to the Governor

My fellow blogger, Loren Shure, asked Governor Patrick what he thinks good corporate citizens can do
to support STEM education.

Loren Shure expressing her interests in STEM Education to the Governor. Photo by Jeff Newcum

The Governor gave a couple examples of how companies can get involved such as mentoring area students and engaging in student competitions. There already exist many opportunities to do this…

I have known many MathWorkers who volunteer at a local elementary school as math tutors in preparation for standardized tests.  The same school has a Lego® Club where some of my colleagues mentor students on building robot using Lego® Mindstorms.

In Governor Patrick’s response to Loren, he gave a specific example of a robotics competition, FIRST.

Most people have heard of FIRST (For Inspiration and Recognition of Science and Technology).  If you haven’t,
browse around the FIRST website for a few minutes and get inspired about the great things available to the next
generation of engineers and scientists.  They have programs targeted at many different age groups, from the Junior FIRST Lego League for ages 6-9 years all the way up to “the varsity sport for the mind” FIRST
Robotics Competition for ages 14 to 18 years.

Targeted toward college students is the EcoCAR Challenge (which I wrote about in a recent
post). MathWorks is a sponsor of the competition, and some of my colleagues act at mentors to teams. The goal is to modify GM donate vehicles in an attempt to reduce emissions, minimize fuel consumption AND maintain consumer appeal.  Those college students involved are already on their way to careers in engineering.

Another competition I am very excited about is ET Robocon, which MathWorks also sponsors.  The site is in Japanese, but you can see videos like this one on YouTube (search for ET Robocon).  I see ET Robocon as an embedded software design competition.  Teams all start with a standard LEGO® NXTway robot (a two-wheel
balancing robot built from LEGOs).  They have to develop an autonomous control strategy and implement it to race robot around a pre-set track as fast as possible.  Some of my colleagues from Japan developed the balancing algorithm using Simulink and Real-Time Workshop Embedded Coder (available on the File Exchange here).  All the teams have to incorporate that balancing software into their larger design.  I learned that there are many university teams as well as professional engineers from major companies involved in the competition.

Are you a mentor?  Are you involved in any of these or other competitions that encourage students to explore STEM fields?  Leave a comment here and share your experience.