I have been writing books, programs, newsletter columns and blogs since 1990. I have now collected all of this material into one repository. Cleve's Corner Collection consists of 458 "documents", all available on the internet. There are

C^5 is an app, a search tool that acts like a traditional library card catalog. It allows you to do keyword based searches through the collection and follow links to the material on the net. Responses to queries are ordered by the scores generated by Latent Semantic Indexing, LSI, which employs the singular value decomposition of a term-document matrix of key word counts.

Here is the opening window for C^5. 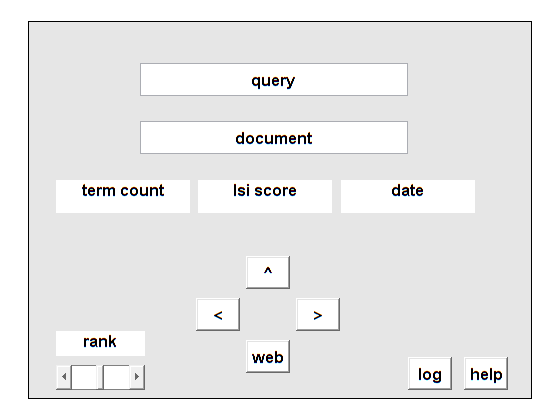 Enter a query, usually just a single key word, in the edit box at the top. This is a term. The names of the various documents that are relevant to the term are then displayed, one at a time, in the document box.

The arrow keys allow the document list to be scanned and changed. The LSI score determines the ordering of the list. The term count is the number of times, if any, that the query term appears in the document. The web button accesses a copy of the document on the internet.

For my first example, let's search for material I have written that mentions Stanford Emeritus Professor of Computer Science, Donald Knuth. Enter "knuth" in the query box or on the command line. 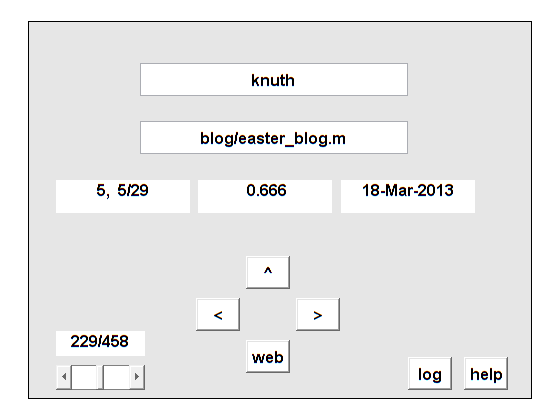 The first document name "blog/c5_blog.m" refers to this blog post, so there is a bit of self reference happening here. The document suffix is .m because the source texts for my blog are MATLAB programs processed by the publish command.

Click on the log button and then click a dozen or so times on the right arrow. This log of the successive displays is printed in the command window. Document names, dates, and term counts are displayed in decreasing order of LSI score.

The second most relevant document, "easter_blog.m", is a post from 2013 that describes an algorithm, popularized by Knuth, for computing the date each year in the Western, or Gregorian Calendar that Easter Sunday is celebrated. The term count is "5, 15/29", so the first two documents account for slightly over half of the total appearances of the search term.

The next six lines tell us that "knuth" appears in blog posts about the Lambert W function, Hilbert matrices, random numbers, and George Forsythe (gef), as well as a MATLAB News and Notes column in 2003 about stiff differential equations, and the actual MATLAB program from EXM for computing the date of Easter.

I don't know how to parse .html or .pdf files, so I have collected the original source material for everything that I have written that is now available on the web. There are .m files for the blog and MATLAB programs, .tex files for the LaTeX of the book chapters, and .txt files for the newsletter columns and transcripts of the videos. There are 458 files totaling about 3.24 megabytes of text.

I have a program, c5setup, that I run on my own laptop to extract all the individual words and produce the term-document matrix. This is a sparse matrix whose (k,j) -th entry is the number of times that the k -th term appears in the j -th document. It is saved in c5database.mat for use by the c^5 app.

The sparsity of the term-document matrix is a little over one percent.

Spy plot of the first 1000 rows of the term-document matrix. 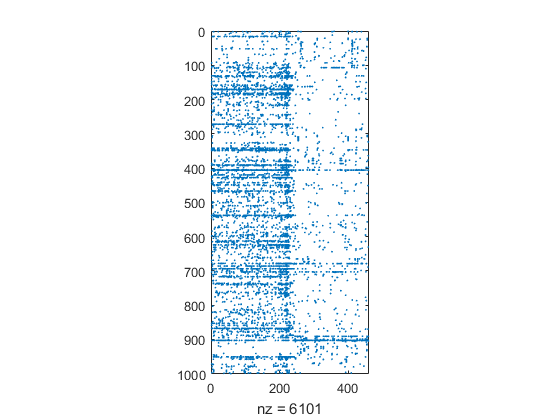 The row sums are the total term counts.

Surprise. I write a lot about MATLAB and matrices.

We might as well compute all the singular values of the full matrix. It takes less than a second. It's important to use the economical version of the SVD that produces a U the same size as A. Otherwise we'd have a 16,315-by-16,315 U.

A logarithmic plot of the singular values shows that they do not decrease very rapidly. 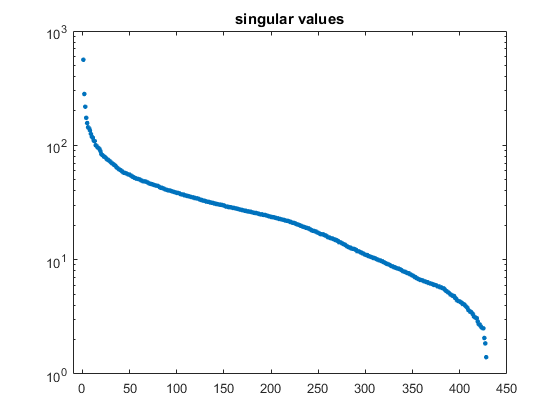 I wrote a post about Latent Semantic Indexing a month ago. LSI employs a reduced rank approximation to the term-document matrix. c^5 has a slider for choosing the rank. The plot of the singular values shows that the accuracy of the approximation is pretty much independent of the chosen value. Any value except very small values or large values near full rank gives an approximation good to between one and ten percent. The power of LSI does not derive from the approximation accuracy. I usually take the rank to be about half the number of columns.

The three arrow keys in the c^5 app can be clicked with either the left or right mouse button (or control-click on a one-button mouse).

Repeatedly clicking the up arrow with the right button (an alt click) is a good way to browse the entire collection. 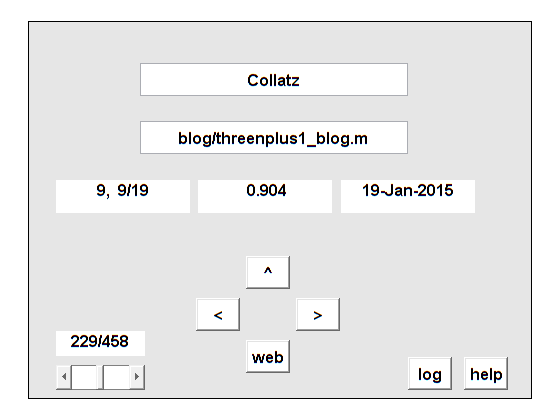 Collatz appears in two posts from 2015, one on his 3n+1 problem and one on an elegant inequality that produces a surprising graphic, and in the section of this blog post about c^5 that you are now reading, He is also mentioned in the introduction to the NCM book, but the LSI value of very small. The double arrow at the beginning of each line signifies a right click, skipping over documents that do not mention him.

I have written a lot about the card game Blackjack. 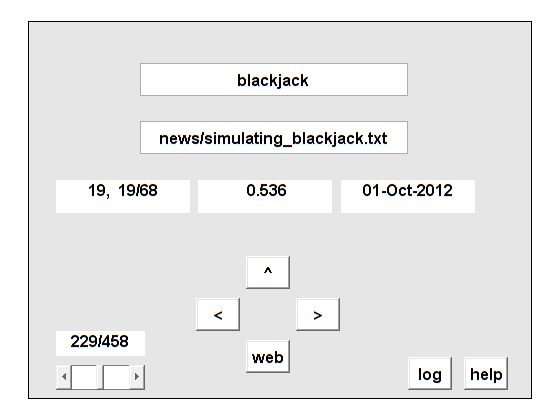 We can see two newsletter columns, three blogs, a portion of a book chapter, several code segments, and two copies of the blackjack app. Again, I am using right clicks.

I recently wrote a blog post about Levenshtein Edit Distance Between Strings. If c^5 does not recognize the key word in a query, it uses Levenshtein distance to find the closest match in the term list to the unrecognized query. This easily corrects simple spelling mistakes, like missing letters. For example the missing "i" in "polynomal" is corrected to become "polynomial". And "Levenstein" becomes "levenshtein".

I received a pleasant surprise when I entered "Molar", expecting it to become "moler". Instead, I got "polar" because only one substitution is required to convert "Molar" to "polar", but two substitutions are required to turn "Molar" into "moler". (Microsoft Word spelling correction used to turn "MATLAB" into "Meatball".)

Worse yet, I can't look for an exact match to the two-word string "Wilkinson polynomial" because the first thing the setup program does is to break text into individual words.

This project is not finished. If I work on it any more, I am going to have learn about scraping, stemming and lemmatization of the source texts. This involves relatively simple tasks like removing possessives and plurals and more complicated tasks like combining all the words with the same root or lemma. The sentence

I can imagine doing a better job of parsing queries, although I could never approach the sophistication of a system like Google or Siri.

A significant fraction of what I have written is not prose -- it is mathematics or code. It cannot be parsed with the techniques of text analytics. For example, the source texts for the books NCM and EXM have hundreds of snippets of LaTeX like

My c5setup program now has to skip over everything like this. In doing so, it misses much the message.

I had updated Cleve's Laboratory in the Central File Exchange to include c5.m and c5database.mat.