You probably heard about the "beer and diapers" story as the often quoted example of what data mining can achieve. It goes like this: some supermarket placed beer next to diapers and got more business because they mined their sales data and found that men often bought those two items together. 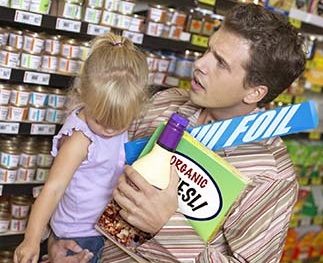 Today's guest blogger, Toshi Takeuchi, who works in the web marketing team here at MathWorks, gives you a quick introduction to how such analysis is actually done, and will follow up with how you can scale it for larger dataset with MapReduce (new feature in R2014b) in a future post.

I have been interested in Market Basket Analysis not because I work at a supermarket but because it can be used for web usage pattern mining among many applications. Fortunately, I came across a good introduction in Chapter 6 (sample chapter available for free download) of Introduction to Data Mining. I obviously had to give it a try with MATLAB!

Let's start by loading the example dataset used in the textbook. Raw transaction data is turned into a binary matrix representation with 1 meaning the given item was in the given transaction, but otherwise 0.

This is, for example, a 3-itemset:

A transaction can contain multiple itemsets as its subsets. For example, an itemset {Bread, Diapers} is contained in T2, but not {Bread, Milk}.

Support count is the count of how often a given itemset appears across all the transactions. Frequency of its appearance is given by a metric called support.

Association rules are made up of antecedents (ante) and consequents (conseq) and take the following form:

A k-itemset where k > 1 can be randomly divided into ante and conseq to form such a rule. Here is an example:

The most basic measure of rules is confidence, which tells us how often a given rule applies within the transactions that contain the ante.

A given rule applies when all items from both antes and conseqs are present in a transaction, so it is the same thing as an itemset that contains the same items. We can use the support metric for the itemset to compute confidence of the rule.

Now that we know the basic concepts, we can define the goal of our analysis: finding association rules with a sufficient level of support (happens often enough) and confidence (association is strong). Lift can be a secondary measure to score the interestingness of the rules found.

In a brute force method, you would calculate the support and confidence of all possible itemset combinations, but that would be computationally expensive, because the number of candidates grows exponentially.

The apriori algorithm addresses this issue by generating candidates selectively. To get an intuition, think about the frequency of an itemset that contains some infrequent items. That itemset will never be more frequent than the least frequent item it contains. So if you construct your candidates by combining the frequent itemsets only, starting from 1-itemset and continue to higher levels, then you avoid creating useless candidates.

Let's start with generating frequent itemsets and get their support measures. I wrote a couple of MATLAB functions to implement this algorithm.

When we computed support for each itemset we evaluated, we stored the result in a Map object S. This is used for rule generation in order to avoid recalculating support as part of the confidence computation. You can now retrieve support for a given itemset with this object, by supplying the string representation of the itemset as the key. Let's try [2,4,6]:

This itemset clearly didn't meet the minimum support criteria of 0.60.

We saw earlier that you can generate rule candidates from frequent itemsets by splitting their contents into antes and conseqs, and computing their confidence.

If we generate every possible candidates by such brute force method, it will be very time consuming. Apriori algorithm is also used to generate rules selectively. Let's say that this rule has low confidence.

Then any other rules generated from this itemset that contain {Milk} in rule consequent will have low confidence.

Why? because support for those antes will be always greater than the initial ante {Beer, Diapers}, while the support for the itemset (hence also for the rule) remains the same, and confidence is based on the ratio of support between the rule and the ante.

We can take advantage of this intuition by first generating rules with only one item in conseq and drop those that don't meet the minimum criteria, and then merge those conseqs to generate rules with two items in conseq, and so forth.

Now we can generate association rules from the frequent itemsets we generated in the previous step.

With a minimum support of 0.6 and a minimum confidence 0.8, we found only one rule that clears those thresholds: {Beer} => {Diapers}. The confidence is 1.00, which means we see diapers in all transactions that include beer, and the lift is 1.25, so this rule is fairly interesting.

As a non-supermarket use case of Market Basket Analysis, the textbook uses the 1984 Congressional Voting Records dataset from the UCI Machine Learning Repository. We can test our code against the result in the textbook.

For the purpose of Market Basket Analysis, you can think of individual members of congress as transactions and bills they voted for and their party affiliation as items.

Now we generate frequent itemsets with a minimum support threshold of 0.3, but we need to use a slightly lower threshold because MATLAB uses double precision numbers.

Then we generate some rules.

Finally, let's compare our results with the results from the textbook. 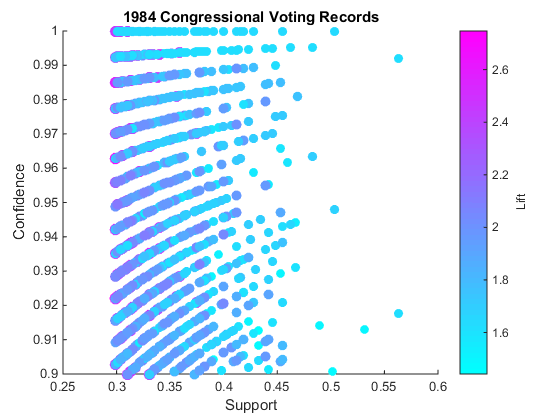 You see that rules we generated match with those in the textbook. The plot of support, confidence and lift is useful to identify rules that are high support, high confidence (upper right region of the plot) and high lift (more magenta). If you type gname into MATLAB prompt, you can interactively identify the indices of those points, and hit Enter to end the interactive session. 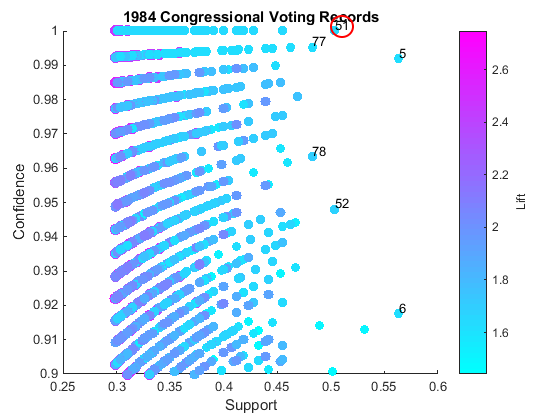 We used a small sample dataset in order to learn the basics of Market Basket Analysis. However, for real applications such as web usage pattern mining, we will typically be dealing with quite a large dataset. In a later post, I would like to figure out how to extend what we learned here with the help of MapReduce, introduced in R2014b. Any thoughts about your creative use of "Market Basket Analysis" with your data? Let us know here.

aprioriGen() is a helper function to findFreqItemsets() and generates candidate k-itemsets using the Apriori algorithm.

getData is a script that fetches the congressional voting data using the RESTful API access function webread() that was introduced in R2014b, and preprocesses the data for Market Basket Analysis.