I wrote previously that most spatial image transformation implementations use inverse mapping. The Image Processing Toolbox function imtransform is implementated using this technique. 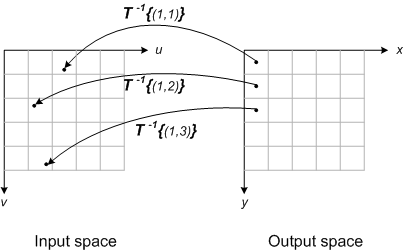 There are three basic problems you can have with the output grid. It can be too small; it can be too big; or it can be in the wrong place entirely. I'll illustrate these situations with an output grid that is the same size as the input grid, and that is also in the same place.

In the next example, the spatial transformation shrinks the input image. As a result, the output grid covers too much territory. The black output pixels below are output image pixels that aren't needed to capture the entire transformed image.

When we were designing imtransform, we thought that any of these scenarios would likely result in frustrated users calling tech support. We tried to avoid this by making imtransform do "the right thing."

Next time, I'll describe the calculation imtransform does to automatically produce the results expected by users. (Almost all the time, that is.) If you want a preview, take a look at the function findbounds.