This is the fifth such installment and the first of a multipart post about modern MATLAB.

Despite its name, MATLAB is not just a Matrix Laboratory any more. It has evolved over the last 35 years into a rich technical computing environment.

PC-MATLAB had only about a dozen graphics commands, including plot for two-dimensional work and mesh for three dimensions. The results were rendered on low resolution displays with limited memory and few, if any, colors. But as the equipment evolved, so did MATLAB graphics capabilities.

In 1986 we released a version of MATLAB named PRO-MATLAB, for UNIX workstations including the Sun-3. The displays and the window systems on these workstations supported more powerful graphics.

In 1992 we released MATLAB 4 for both PCs and workstations. This release included significant new graphics features, including color. I remember struggling with conversion of the RGB color represention that was the basis for our software to the CMYK representation that was expected by the printers of our paper documention. The problem is under specified. We have three values, R, G and B. They are weighted average of four values, C, M, Y and K. What are those four values? I was immensely pleased when I saw the first successful page proofs for the color insert.

This is not the place to describe all the graphics features we have in MATLAB today. Here's a sample, four different views of one of our venerable test surfaces. 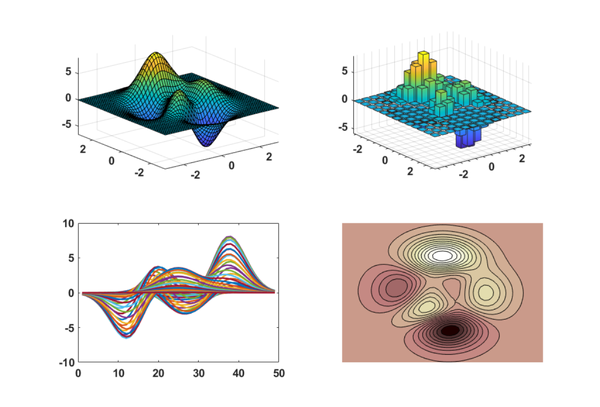 For many years MATLAB had only one numeric data type, IEEE standard 754 double precision floating point, stored in the 64-bit format.

Over several releases, we added support for single precision. Requiring only 32 bits of storage, single precision cuts memory requirements for large arrays in half. It may or may not be faster.

MATLAB does not have declarations, so single precision variables are obtained from double precision ones by an executable conversion function.

Let's see how much storage is requied for these quantities

In 1992 MATLAB 4 introduced sparse matrices. Only the nonzero elements are stored, along with row indices and pointers to the starts of columns. The only change to the outward appearance of MATLAB is a pair of functions, sparse and full. Nearly all the operations apply equally to full or sparse matrices. The sparse storage scheme represents a matrix in space proportional to the number of nonzero entries, and most of the operations compute sparse results in time proportional to the number of arithmetic operations on nonzeros.

For example, consider the classic finite difference approximation to the Laplacian differential operator. The function numgrid numbers the points in a two-dimensional grid, in this case n-by-n points in the interior of a square.

The function delsq creates the five-point discrete Laplacian, stored as a sparse N-by-N matrix, where N = n^2. With five or fewer nonzeros per row, the total number of nonzeros is a little less than 5*N.

Let's time the solution to a boundary value problem. For the sparse matrix the time is O(N^2). For n = 100 it's instanteous.

The full matrix time is O(N^3). It would require several seconds to compute the same solution.

Cell arrays were introduced with MATLAB 5 in 1996. A cell array is an indexed, possibly inhomogeneous collection of MATLAB objects, including other cell arrays. Cell arrays are created by curly braces, {}.

Cell arrays can be indexed by both curly braces and smooth parentheses. With braces, c{k} is the contents of the k-th cell. With parentheses, c(k) is another cell array containing the specified cells.

Think of a cell array as a collection of mailboxes. box(k) is the k-th mail box. box{k} is the mail in the k-th box.

For many years, text was a second class citizen in MATLAB.

With concerns about cross platform portability, Historic MATLAB had its own internal character set. Text delineated by single quotes was converted a character at a time into floating point numbers in the range 0:51. Lower case was converted to upper. This process was reversed by the DISP function.

Here is some output from Historic MATLAB.

MathWorks versions of MATLAB have relied on the ASCII character set, including upper and lower case. Character vectors are still delineated by single quotes.

Multiple lines of text, or many words in an array, must be padded with blanks so that the character array is rectangular. The char function provides this service. For example, here is a 3-by-7 array.

Or, you could use a cell array.

In 2016, we began the process of providing more comprehensive support for text by introducing the double quote character and the string data structure.

There are some very convenient functions for the new string data type.

Addition of strings is concatenation.

The regexp function provides the regular expression pattern matching seen in Unix and many other programming languages.

The distinction between functions and commands was never clear in the early days of MATLAB. This was eventually resolved by the command/function duality: A command statement of the form

is the same function statement with char arguments

is the same as

Then pass the function name as a string to the ODE solver ode45.

It turns out that over half the time required by this computation is spent in repeatedly decoding the string argument. To improve performance we introduced the function handle, which is the function name preceeded by the "at sign", @vanderpol.

The "at sign" is also used to create a function handle that defines an anonymous function, which is the MATLAB instantiation of Church's lambda calculus.

We see that the times required for the later two are comparable, and are significantly faster than the first.