Here is Part 4 of the Series.

In this final post, I will describe what happened on the day of the eclipse and show some images of the corona during totality.

Getting Ready for the Eclipse

Weather was always a concern for viewing the eclipse. Fortunately, eclipse day dawned bright and clear. We set up in a public park in the town of Hartsville, Tennessee near the mid-line of the band of totality. The town had planned events for Eclipse day so we were joined in the park by a few hundred townspeople.

We started by setting up the telescope, camera, and software using the procedures we had perfected through all the previous practice sessions. The pre-eclipse steps included recording the GPS data, aligning the telescope, checking the telescope tracking, and adjusting the focus to get the most precise images possible. Here is a picture of my son, William, using the MATLAB software to monitoring live images of the sun before the eclipse began. 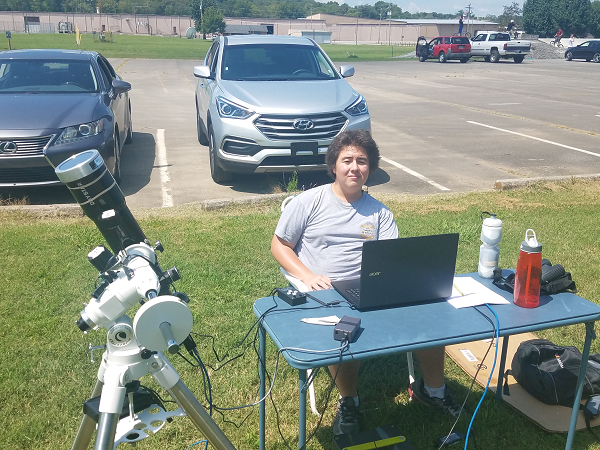 Our goal was to be completely finished with the preliminary steps before the partial phase of the eclipse began. Here is an example image taken during those preparations. This image shows a number of big sunspots visible on the surface of the sun. 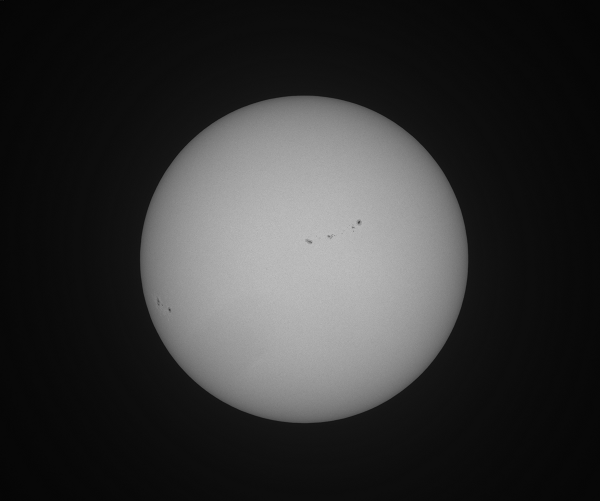 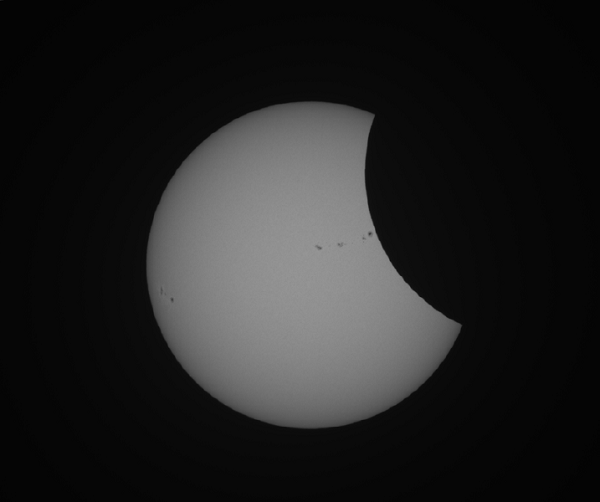 A number of interesting phenomena happened during the partial phase. First, the temperature began to drop. From first contact to totality, the temperature dropped about 7 degrees F. As the eclipse approached totality, the light around us began to dim. About halfway through the partial phase, we observed crescent-shaped images of the sun from light passing through the trees. This occurs because the trees act like thousands of little pin-hole cameras. 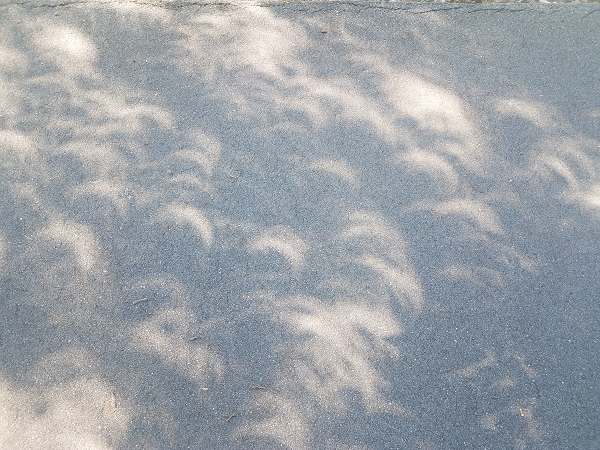 Totality began about 1:30 pm CDT and lasted for about 2 minutes and 30 seconds. As the last of the sun's disk disappeared behind the moon, there was an audible gasp from the crowd as the corona appeared as a white halo around the sun. I heard people around us use words like "beautiful", "other-worldly", and even "spiritual" to describe the appearance of the sun during totality. As a first-timer, I didn't know what to expect. Now that I have experienced my first total solar eclipse, I can honestly say that it is the most amazing natural phenomenon that I have ever experienced.

While we were mesmerized by totality, the MATLAB program was acquiring the images just as it was designed to do. Here are two images taken during totality. The first is from my site in Tennessee. The second is from Andrei's site in South Carolina. Notice the apparent difference in the shape of the prominences at 3 and 4 o'clock.

Of the 68 Citizen CATE teams, 58 reported clear weather in their locations at the time of the eclipse. Most of the teams have uploaded their data to the National Solar Observatory site. Dr. Penn and his team have already begun to analyze the data. A first look movie of the combined data from the Citizen CATE sites has been posted to the Citizen CATE website.

With this final post on the 2017 solar eclipse, I'd like to thank Loren for letting me hijack her blog for this series. I'd also like to thank Harrison Roberts and Andrei Ursache my fellow MATLAB Citizen CATE volunteers for their help during the creation of these posts. Finally, I'd like to thank Dr. Matthew Penn and the National Solar Observatory for allowing us to be a part of this exciting project.

Remember, there is another total solar eclipse that will pass through the United States on April 8th, 2024. Can't wait...