Jiro's pick this week is "Publish dependent and called functions" by Nick Angelini.

Publishing is one of the things I always highlight to MATLAB users, new or experienced. Even though the feature has been around for over 7 years, not many people know about it. I was one of those people who went through graduate school manually creating reports from figures generated in MATLAB. Now, publishing is something that I can't live without. Even many of the bloggers (myself included) on MATLAB Central use publish to write the blog posts.

I was pretty excited to see this entry by Nick. I've always wanted to make something like this, but I never got around to implementing it. While publish would only generate a report for the function or the script you specify, publishdepfun will generate separate reports for any user-defined functions used in the main file, and even append the report to the end of the main report. I immediately found one of my demos that I show at seminars and published it. The syntax is pretty much identical to the MATLAB's publish command. You can also pass in the options structure that's accepted by publish.

My MainAnalysis.m script had 3 custom functions: createFit.m, createfigure.m, and importfile.m. Those 3 functions were published as well and were appended to the end of the main report. As you can see below, the report has a section called "Called Functions". 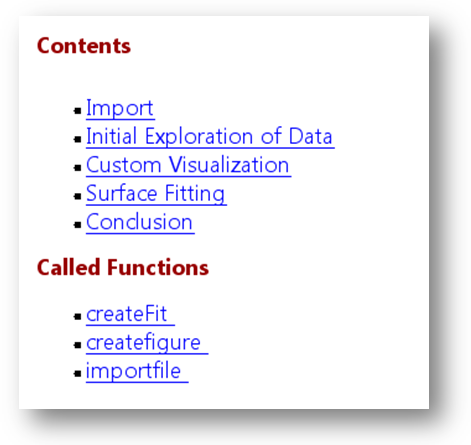 He states in entry that there are still some limitations, but I think this is a great start and has plenty of good utility. Let us know what you think here or leave a comment for Nick.