Although I don’t always understand our users' day-to-day jobs, I’m always interested to learn how they are applying MathWorks tools--especially for “non-traditional” applications.

And while I’m not sure finance will be the next major boom market for Simulink, I find Dimitri’s perspective on Simulink refreshing.

For example, in Dimitri’s models: 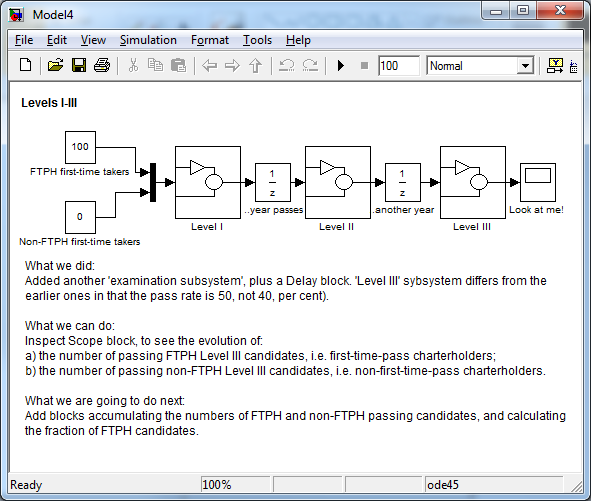 While these are not the most sophisticated models you will ever see, they are clean and simple to follow. Which is more than I can say for many a model I have produced.

Can the Rest of Us Learn to Label Blocks Too?

I am certainly guilty of building a model quickly to describe some particular dynamic system, but then forgetting to go through and change my block names. All of a sudden I have 20 blocks all named “Subsystem”, and I forget why they are in the model and what they do. This is especially painful if I end up going back to the model after a couple of weeks.

As someone who often needs to work with Simulink models built by other people, I don’t know that I can suggest strongly enough the value in spending the extra time to flesh out the model with details like block names, signal names, and occasionally, general comments as Simulink Annotations.

On the other hand, it does speak to how powerful a tool Simulink can be, that we can construct a complex, sophisticated simulation without ever labeling a single block. (Although, I’m not sure I want to admit to that in print!)

Or you can leave a comment for Dimitri Shvorob here.