How do you compute the hypotenuse of a right triangle without squaring the lengths of the sides and without taking any square roots?

These are all important operations.

All of them involve computing

in some way or another.

Let's introduce the notation $\oplus$ for what we call Pythagorean addition.

This has some of the properties of ordinary addition, at least on the nonnegative real numbers.

You can use Pythagorean addition repeatedly to compute the 2-norm of a vector $v$ with components $v_1, v_2, \ldots, v_n$.

It is easy to see how Pythagorean addition is involved in the other operations listed above.

Computationally, it is essential to avoid unnecessary overflow and underflow of floating point numbers. IEEE double precision has the following range. Any values outside this range are too small or too large to be represented.

This crude attempt to implement Pythagorean addition is not satisfactory because the intermediate results underflow or overflow.

If x and y are so small that their squares underflow, then bad_pythag(x,y) will be zero even though the true result can be represented.

If x and y are so large that their squares overflow, then bad_pythag(x,y) will be infinity even though the true result can be represented.

Don Morrison was a mathematician and computer pioneer who spent most of his career at Sandia National Laboratory in Albuquerque. He left Sandia in the late '60s, founded the Computer Science Department at the University of New Mexico, and recruited me to join the university a few years later.

Don had all kinds of fascinating mathematical interests. He was an expert on cryptography. He developed fair voting systems for multi-candidate elections. He designed an on-demand public transportation system for the city of Albuquerque. He constructed a kind of harmonica that played computer punched cards. He discovered the Fast Fourier Transform before Culley and Tuckey, and published the algorithm in the proceedings of a regional ACM conference.

This is the first of two or three blogs that I intend to write about things I learned from Don.

Don was sitting in on a class I was teaching on mathematical software. I was talking about the importance of avoiding underflow and overflow while computing the 2-norm of a vector. (It was particularly important back then because the IBM mainframes of the day had especially limited floating point exponent range.) We tried to do the computation with just one pass over the data, to avoid repeated access to main memory. This involved messy dynamic rescaling. It was also relatively expensive to compute square roots. Before the end of the class Don had sketched something like the following. 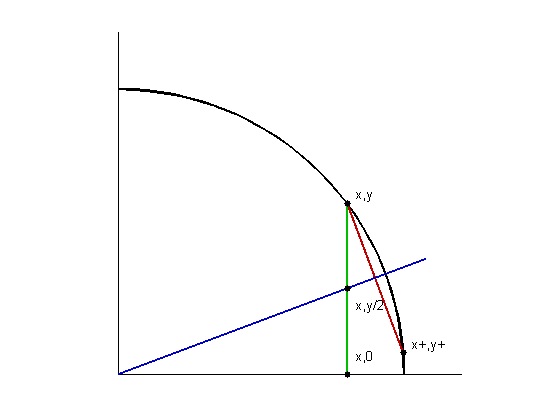 We are at the point $(x,y)$, with $|y| \le |x|$. We want to find the radius of the black circle without squaring $x$ or $y$ and without computing any square roots. The green line leads from point $(x,y)$ to its projection $(x,0)$ on the $x$-axis. The blue line extends from the origin through the midpoint of the green line. The red line is perpendicular to the blue line. The red line intersects the circle in the point $(x+,y+)$. Don realized that $x+$ and $y+$ could be computed from $x$ and $y$ with a few safe rational operations, and that $y+$ would be much smaller than $y$, so that $x+$ would be a much better approximation to the radius than $x$. The process could then be repeated a few times to get an excellent approximation to the desired result.

Here, in today's MATLAB, is the algorithm. It turns out that the iteration is cubically convergent, so at most three iterations produces double precision accuracy. It is not worth the trouble to check for convergence in fewer than three iterations.

Computing r = (y/x)^2 is safe because the square will not overflow and, if it underflows, it is negligible. There are only half a dozen other floating point operations per iteration and they are all safe.

It is not obvious, but the quantity $x \oplus y$ is a loop invariant.

Surprisingly, this algorithm cannot be used to compute square roots.

Starting with $x = y$ is the slowest to converge.

It's fun to compute Pythagorean triples, which are pairs of integers whose Pythagorean sum is another integer.

Augustin Dubrulle is a French-born numerical analyst who was working for IBM in Houston in the 1970s on SSP, their Scientific Subroutine Package. He is the only person I know of who ever improved on an algorithm of J. H. Wilkinson. Wilkinson and Christian Reinsch had published, in Numerische Mathematik, two versions of the symmetric tridiagonal QR algorithm for matrix eigenvalues. The explicit shift version required fewer operations, but the implicit shift version had better numerical properties. Dubrulle published a half-page paper in Numerische Mathematik that said, in effect, "make the following change to the inner loop of the algorithm of Wilkinson and Reinsch" to combine the superior properties of both versions. This is the algorithm we use today in MATLAB to compute eigenvalues of symmetric matrices.

Augustin came to New Mexico to get his Ph. D. and became interested in the pythag algorithm. He analyzed its convergence properties, showed its connection to Halley's method for computing square roots, and produced higher order generalizations. The three of us published two papers back to back, Moler and Morrison, and Dubrulle, in the IBM Journal of Research and Development in 1983.

What has become of pythag? Its functionality lives on in hypot, which is part of libm, the fundamental math library support for C. There is a hypot function in MATLAB.

On Intel chips, and on chips that use Intel libraries, we rely upon the Intel Math Kernel Library to compute hypot. Modern Intel architectures have two features that we did not have in the old days. First, square root is an acceptably fast machine instruction, so this implementation would be OK.

But even that kind of precaution isn't necessary today because of the other relevant feature of the Intel architecture, the extended floating point registers. These registers are accessible only to library developers working in machine language. They provide increased precision and, more important in this situation, increased exponent range. So, if you start with standard double precision numbers and do the entire computation in the extended registers, you can get away with bad_pythag. In this case, clever hardware obviates the need for clever software.