I learned about this topic from my friend Nick Trefethen, a Professor at Oxford and a MATLAB enthusiast. In 2000 he and his father wrote a paper, "How Many Shuffles to Randomize a Deck of Cards?". They refer to work by Persi Diaconis and colleagues. Diaconis is a Professor at Stanford and a world-class magician who has written extensively about the probability involved in activities like card shuffling and coin flipping.

I want to describe some simulations that reproduce the cutoff phenomenon investigated by the Trefethens and Diaconis.

The analysis is based on the number of rising sequences in the shuffled deck. A rising sequence is a maximal subset of cards in increasing numerical order. A deck is the union of its rising seguences. Here is an example, a small deck with just eight cards.

There are three rising sequences is this example.

Let's see how this works on the example.

Both shuffles produce decks with two rising sequences obtained from the two halves of the deck. So their signatures are both equal to 2.

These signatures for pout and pin are way too small; the presence of just two rising sequences indicates perfect shuffles do not produce completely shuffled results.

A completely shuffled deck could be obtained by spreading the cards out on the table and then picking them up one at a time in a random order. This would be a random permutation of the integers 1:52. Let's examine the signature of random permutations. We'll generate a million samples, then normalize the histogram of the resulting signatures so that it becomes a probability distribution, $\sigma_\infty$. This is the signature distribution of completely shuffled decks. Our goal is to get close to this distribution with riffle shuffling. (In order to reduce publication time, distributions are computed separately.) 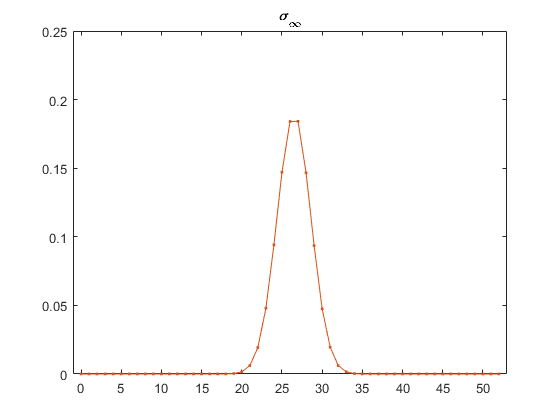 The distribution $\sigma_\infty$ is centered at 26 and 27 and falls off quickly from these two points. Here are the indices and values of all probabilities greater than .005. This tells us that completely shuffled decks have 26 or 27 increasing sequences 18.4% of the time each and that fewer than 21 or more than 32 increasing sequences are very unlikely.

There are two sources of randomness in this model. The deck is cut at a depth determined by a random number chosen from a binomial distribution centered at its midpoint. Cards are then riffled back together. At each step the probability that the next card drops from either cut is proportional to the size of that cut.

Here is one riffle shuffle of a fresh deck. The result almost certainly has a signature equal to 2, although the signature could be only 1 in the extremely unlikely event that the entire first cut falls in one clump before any of the second cut.

Here are three riffles of a fresh deck. The result is likely to have a signature equal to 8, although any smaller value is possible.

Find the probability distribution generated by repeating a riffle shuffle r times. Denote this by $\sigma_r$.

For each value r between 0 and rmax, sample the signature $\sigma_r$ observed when a deck is subjected to r repeated riffle shuffles.

For example, here is $\sigma_3$. Almost 95% of the distribution is concentrated at the maximum signature, 8. Slightly over 5% of the support has a signature in the range of 5 through 7. 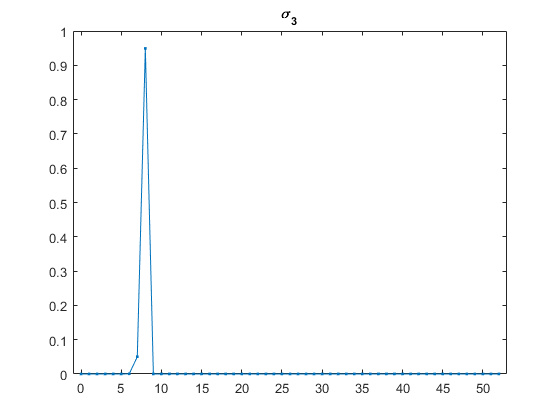 Here are all of the $\sigma_r$. As expected, they appear to be heading towards $\sigma_{\infty}$. 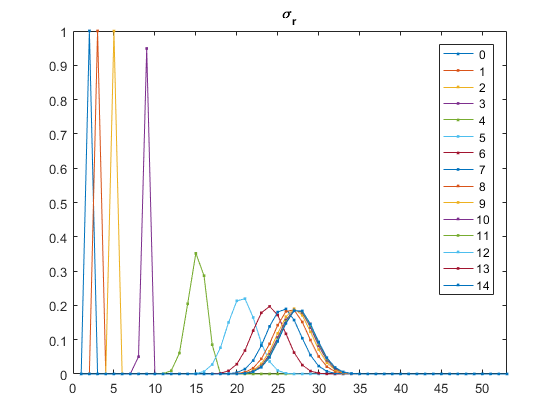 The total variation norm is a very general concept that measures the distance between two probability distributions. In our situation it is simply the 1-norm of their difference, scaled by 1/2 so that it lies between 0 and 1.

For each value r between 0 and rmax, sample the signature $\sigma_r$ observed when a deck is subjected to r repeated riffle shuffles. Compare this with the completely shuffled distribution $\sigma_{\infty}$ and compute the total variation.

How many riffle shuffles are required to produce a completely shuffled deck? Plot the total variation as a function of the number of repetitions. The value of tv hovers very close to 1.0 for the first four shuffles, but then between five and nine shuffles it drops quickly to below 0.1. This is the cutoff phenomenon.

It takes seven shuffles for the total variation to fall below 0.5. The conclusion is that about seven riffle shuffles are usually necessary and sufficient to produce a completely shuffled deck. Diaconis reaches this conclusion with a rigorous probabilistic analysis. Trefethen sees the cutoff with an analysis involving matrix powers and pseudospectra.

Here are the animation and the cutoff plot for four decks, so n = 208. The distribution of the random permutations, $\sigma_{\infty}$, is more spread out. But the shape of the cutoff is the same, it just occurs three shuffles later.

The conclusion here is that about ten riffle shuffles are usually necessary and sufficient to completely shuffle four decks. 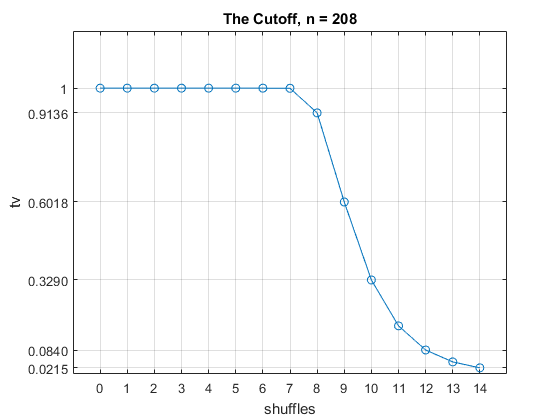 Thanks very much to Nick Trefethen for help with this post.

A terrific series of videos from an interview with Persi Diaconis on Numberphile.