This is a demo of reconstructing a 3D shape from multiple images using a simple space-carving approach. This technique is usually used when you need a 3D model of a small artefact which can be placed on a turntable, allowing dozens, even hundreds of images to be captured from around the object. It has been used pretty successfully by museums and the like to create online virtual galleries.

A little while ago (is it really four years?!) I was asked to prepare a demonstration for a customer visit. The customer had some samples that they wanted to photograph in order to estimate the volume occupied before and after a chemical process. These samples were smooth but irregularly shaped such that a simple "volume of revolution" calculation was inaccurate. They wanted to know if accurate volume estimation from images was possible, and if so how you might do it.

The demo I produced is enumerated below and is the most basic form of a technique called "space carving" or "shape from silhouettes", where each image is just used as a mask. A lump of voxel "clay" is placed in the middle of the scene and from each image we simply look and see what is outside the object silhouette. Anything outside is carved away. Obviously, this requires us to know where the camera was relative to the object when the picture was taken, which is a whole separate problem.

This technique has been refined over the last decade and can be done in some computationally and memory efficient ways. My approach is neither of these - I went for simplicity over efficiency since my only aim was to explain the technique and show it in MATLAB.

The dinosaur images used here were provided by Wolfgang Niem at the University of Hannover.

The camera data used in this example was provided by Dr A. W. Fitzgibbon and Prof A. Zisserman from the University of Oxford Robotics Research Group.

The images and camera data can both be downloaded from the Visual Geometry Group web-pages at the University of Oxford Robotics Research Group.

All functions for this demo are in the "spacecarving" package and the data in the "DinosaurData" folder.

Load the Camera and Image Data

This reads the "Dinosaur" directory, loading the camera definitions (internal and external calibration) and image file for each camera. These calibrations have previously been determined from the images using an automatic process that we won't worry about here. 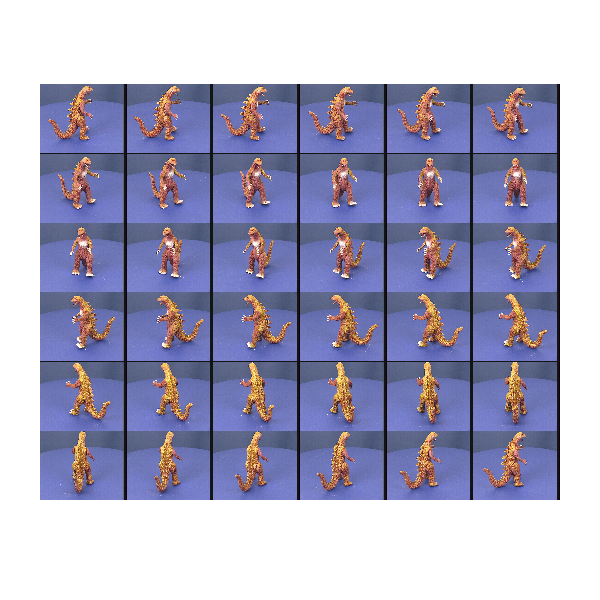 Convert the Images into Silhouettes

The image in each camera is converted to a binary image using the blue-screen background and some morphological operators to clean up the edges. This becomes the "mask" referred to above. Holes in this mask are particularly dangerous as they will cause voxels to be carved away that shouldn't be - we can end up drilling a hole through the object! The Image Processing Toolbox functions bwareaopen and imclose are your friends for this job! 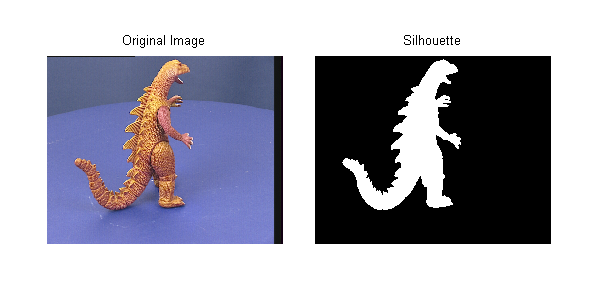 This creates a regular 3D grid of elements ready for carving away. The input argument sets the half size (i.e., 50 means 101x101x101 voxels). Use 20 for a quick and dirty model, 50 for reasonable and 100+ if you want a detailed model (and have enough memory!).

For "real world" implementations of space carving you certainly wouldn't create a uniform 3D matrix like this. OctTrees and other refinement representations give much better efficiency, both in memory and computational time. 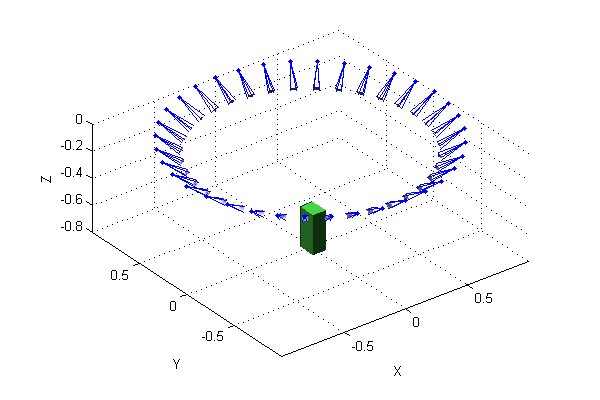 The silhouette is projected onto the voxel array. Any voxels that lie outside the silhouette are carved away, leaving only points inside the model. Using just one camera, we end up with a dinosaur-prism - a single camera provides no information on depth. 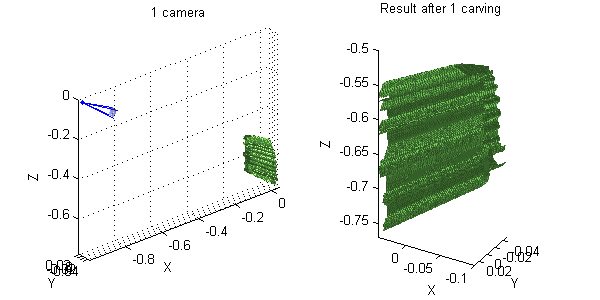 Adding more views refines the shape. If we include two more, we already have something recognisable, albeit a bit "boxy". 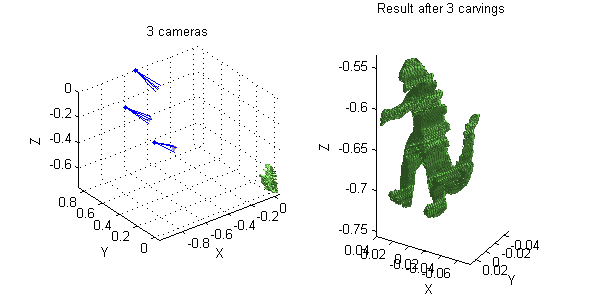 Now Include All the Views

In this case we have 36 views (roughly every 10 degrees). For a very detailed model and if you have an automatic capture rig you would use far more - the only limit being time and disk-space. When using a computer controlled turn-table (as is done in museums) storage is the only real limitation.

For online galleries and the like we would colour each voxel from the image with the best view, leading to a colour 3D model. Maybe one day I'll have time to do that too, but for now here's the uniformly coloured surface. 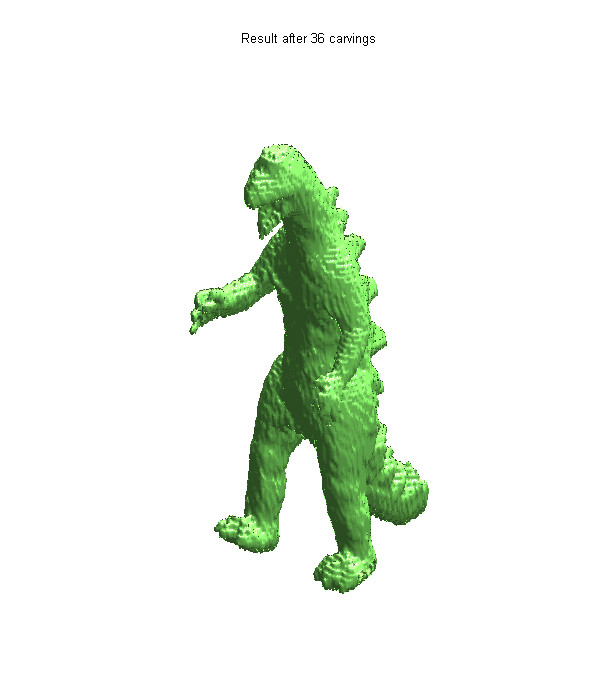 Hopefully this demo has given you a taste for what is possible by simple image masking and space-carving. If this has whetted your appetite, have a look at the references below. Converting each image to a binary mask throws away a lot of information. Instead of using these silhouettes, we could use the image values (either greyscale or colour) and a photo-consistency constraint. This is much harder to get right, but copes much better with concavities and holes in the model.

Have you ever been asked about volume estimation from images? Do you fancy trying this at home? Perhaps you've implemented a better way to do this? I'd love to hear from you here.

UPDATE! The functions created for this demo are on the File Exchange. They are available here. As a reminder, there's a link above for getting the data.

Some good references for this (including the original paper that used these images) are: