In today's post I share a text processing example using the new string array and a collection of new text manipulation functions, both introduced in R2016b. I also give recommendations on when best to use string, char, or cell for text and share some of our thinking on the future.

Also be sure to check out Toshi's post Introducing String Arrays and Loren's post Singing the Praises of Strings.

Example: How Late Is My Bus?

My friend in New York City talks about the delays on her bus route. Let's look at some data to see what typical delays are for trains and buses. The Open NY Initiative shares data which includes over 150,000 public transit events spanning 6 years. I downloaded this data as a CSV file from: https://data.ny.gov/Transportation/511-NY-MTA-Events-Beginning-2010/i8wu-pqzv

I read the data into a table using readtable and specify the TextType name-value pair as string to read the text as string arrays.

Here is a list of variables in the table:

data.EventDescription is a string array which contains the event descriptions. Let's take a closer look at the events.

Many of the event descriptions report delays like 'operating 10 minutes late'. See for example how the 26-minute delay is reported in event 5180.

I convert the text to all lowercase and determine which events contain ' late ' using the contains function.

I extract the minutes late from phrases like 'operating 10 minutes late' using the functions extractAfter and extractBefore.

Let's look at the first late event. The exact phrase we are seeking doesn't appear in this event. When we look for the text following 'operating' we get back a missing string.

Success! We extracted the train delay from the event description. Now let's put this all together. I extract the minutes late from all the events and drop the missing values using the rmmissing function. I then convert the remaining values to numbers using double and plot a histogram of the results. 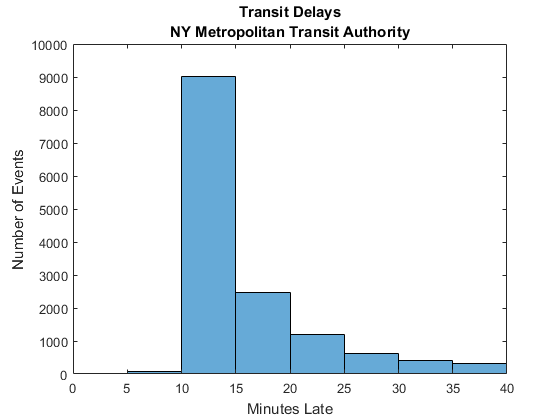 It looks like reported delays are often 10-15 minutes. This simple routine captures many of the transit delays, but not all. The pattern doesn't always fit (consider again lateEvents(1)). I also left out any delays that may be reported in hours. Can you improve it?

String arrays are a great choice for text data like the example above because they are memory efficient and perform better than cell arrays of character vectors (previously known as cellstr).

The memory savings can be much greater for many smaller pieces of text. for example, suppose I want to store each word as a separate array element. First I join all 150,000 reports into a single long string using the join function. I then split this long string on spaces using the split function. The result is a string array storing over 4 million words in separate elements. Here the memory savings is nearly 2X.

So, should you use string arrays for all your text? Maybe not yet. MATLAB has three different ways to store text:

Looking to the Future

Next we will replace cell arrays of character vectors in MATLAB with string arrays. Note that cell arrays themselves aren't going anywhere. They are an important MATLAB container type and good for storing mixed data types or arrays of jagged size among other uses. But we expect their use for text data will diminish and become largely replaced by string arrays which are more memory efficient and perform better for pure text data.

Speaking of compatibility: we care deeply about version-to-version compatibility of MATLAB code, today more than ever. So, we are taking the following steps in our roll out of string arrays:

Expect to hear more from me on this topic. And please share your input with us by leaving a comment below. We're interested to hear from you.

We hope string arrays will help you accomplish your goals and that the steps we're taking provide a smooth adoption. If you haven't tried string arrays yet, learn more from our documentation on characters and strings.